How the #WalkAway Campaign is Drowning the Blue Wave Democrats

Joy Overbeck
|
Posted: Jul 11, 2018 12:01 AM
Share   Tweet
The opinions expressed by columnists are their own and do not necessarily represent the views of Townhall.com. 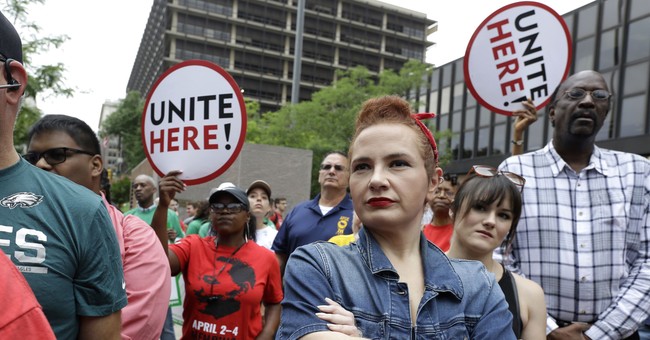 The #walkaway campaign is now over 100,000 strong in just a few weeks.  These are former liberals who have discovered, as its founder Brandon Straka says in his video, “the Democratic Party’s greatest and most insidious lie:” That without them, you are nothing. As Straka puts it, “They will insist that you are a victim doomed to exist within a system that is rigged against you…that you are a victim of systematic oppression…that you are a victim of your circumstances, and no amount of hard work or motivational action will ever allow you to overcome your victimhood or the privilege of those around you.”

In rejecting the Greatest Lie, the members of #walkaway are rejecting the Democrats’ only recruitment tool – victimization. Those walking away are rebels, an “awoke” army declaring their freedom as individuals, claiming their futures and their very lives. They’re ringing an echo of the patriots of 1776.

As Candace Owens of TurningPointUSA put it in her electrifying speech onstage at the Western Conservative Summit in Denver, they are fleeing the plantation of Democrat servitude. Most of all, they are awakening to the self-actualization and fierce can-do spirit that is at the very core of the American experiment.

You can see it in the fired-up grit, and often in the tears of the hundreds who have posted their own videos on the site or written about their “walk away” moments. Most are first-timers at expressing themselves on video but each story vibrates with authenticity.

There’s a Memphis woman who introduces her young nephew, a St. Jude Hospital cancer survivor. She had tweeted a thank-you to Eric Trump for the Trumps’ $16 million contribution to the charity, and she’s furious at the cascade of Twitter attacks from left-wingers that she’s endured for thanking Trump.

A woman who describes herself as liberal is married to a Navy vet who became a Trump voter. She says, “I was horrified that our friends now say I married a racist, homophobic, misogynist, horrible man. My Facebook page is just cancer, people hating on each other. I won’t be voting for a party that accuses everybody of being racist.”

There’s a gay man who says when he came out as a Trump supporter he was “called a Nazi, a self-hating fas$$$$...the gays and liberals have been ruthless towards me. I was never treated this way coming out of the closet as gay.” He speaks for many when he laments the loneliness he’s endured shunned by his “tribe” and vilified on social media. But then he rejoices that “I am so happy to see so many people bravely standing up now…. now I don’t feel so alone either.”

Each of these testimonial posts is followed by dozens of welcoming responses and thank-yous from others on the site who identify with the speaker because of what they too have endured from leftist haters when they’ve walked away. #walkaway is becoming a family.

These are people who have been watching. They’ve watched the lefty students in Berkeley and other colleges rioting violently against conservative speakers, throwing pies at Ann Coulter, going berserker against Milo and banning Ben Shapiro. They’ve seen that vicious “comedian” holding Trump’s bloody fake head and her fellow “comedian” calling Ivanka Trump foul names. They’ve watched football players in the only nation on earth where they can make millions running around a field; disdain the flag of that nation.

They’ve watched the media lie about Trump and attack his pro-American policies that are improving their lives. They’ve seen the president called a racist, a misogynist, and a Russian bot with no evidence except a “dossier” of fake accusations by unnamed accusers, paid for and promoted by the Democrat Party and the Hillary Clinton campaign. They’ve watched San Francisco millionaire Nancy “Crumbs” Pelosi mock the Trump tax cuts that are actually fattening their paychecks and giving their families better lives.

And lately they’ve seen an elected representative of the people of California, Democrat Maxine Waters, inciting violence and urging people to hunt down Trump administration staff and flash mob them so they aren’t safe in restaurants, shopping malls, anywhere. The Democrat party faithful that became #walkaway watched all this and said WHOA! The Republicans aren’t the intolerant mob – the Democrats are. The Republicans aren’t the haters – the Democrats are.

Hip hop mogul Kanye West may have inadvertently given the future walk-awayers a shot of courage a few months ago when he tweeted “I love how Candace Owens thinks.”  Immediately he was vilified as a traitor to the left and peppered with rage by his famous black “brothers” in the entertainment industry. The storm only got wilder when he tweeted, “You don’t have to agree with Trump but the mob can’t make me not love him. We are both dragon energy. He is my brother.” And shot out a picture of a MAGA hat – signed by Trump!

Candace Owens herself along with the founder of Turning Point USA, Charlie Kirk, recently held a strategy summit with a couple dozen players in the movement, most of them black. These patriots have thousands of subscribers to their own longtime YouTube channels, like Anthony Brian Logan (191,000 subscribers), David J. Harris Jr., (34,000 subscribers --(Facebook cancelled his page) and ex-police officer Brandon Tatum (137,000 subscribers).

Powerful, smart, conservative voices have a lot to say about what’s wrong with Democrats. They talk about the revelation that the Democrats WERE the raging KKK, the Democrats hung black men from trees, the Democrats kept blacks from voting, the Democrats were against the Civil Rights legislation of 1964.

Brandon Tatum’s stunning video, “Democrats Hate Black People” has over 110,000 views. He says he couldn’t believe it when he found out the Democrats started the KKK – he always thought it was the Republicans. And what are the Democrats doing now? “They’re picking illegals over black people because they want the next voting bloc, and that’s illegals. They don’t care about you and your families. They want a population of ignorant people they can control. What did Barack Obama do for black people? Nothing…I really wish people would wake up. I got my MAGA hat on and I wear it because I’m a person with a brain and I’ve decided to walk away and be independent as a thinker… We need to walk to the light…”

Too many people are waking up and walking to the light – black, Hispanic, white, LGBT. The #walkaway campaign will be a world-changer for the Democrats this Midterm election. Leftists and liberals – get yourself a nice bathing suit – there’s a red wave on the horizon.