Joy Overbeck
|
Posted: Jun 04, 2018 12:01 AM
Share   Tweet
The opinions expressed by columnists are their own and do not necessarily represent the views of Townhall.com. 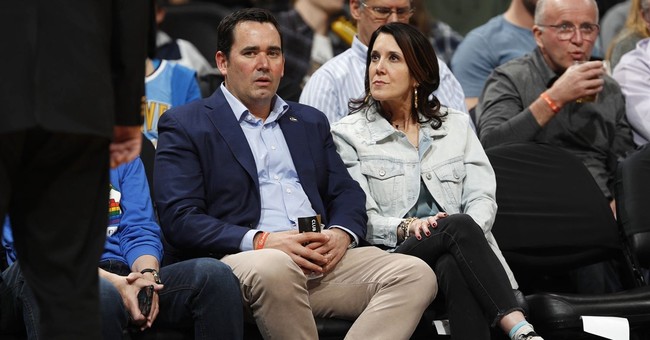 Since our champion “outsider” miraculously became president, everyone wants to be an outsider. “Outsider”, good; “Insider” bad is the strident campaign theme this primary season. But this new purity test can spell disaster.

Some on the right have twisted Trump’s victory into a full-throated takedown of Republican office-holders who have now become “insiders” simply because they were elected by us Republicans.  Whoa!   Isn’t that what we should all be vigorously and single-mindedly pursuing  – electing more Republicans?

This same goofy oxymoron (especially the moron part) only in reverse gave us the 2016 primary purity test that rejected Trump as a laughably inexperienced, know-nothing “outsider” and in the general election it amped up into the mega purity test that spawned the Never-Trumpers.   Rejecting experience in government and electing someone politically inexperienced worked with Trump because he has a uniquely qualified background that has given him talents and insights far outpacing most presidential contenders. It also helps that he’s quite brilliant. But electing government “outsiders” can also be a debacle named Arnold Schwarzenegger or Jesse Ventura.

The “outsider” halo effect is also terribly unfair to excellent Republican candidates who have worked hard for conservative issues as government officials and are now branded “insiders.” One of them is Republican Walker Stapleton, a smart, successful, thrifty conservative fourth-generation Coloradan who’s been elected  treasurer twice and is now seeking the gubernatorial nomination in the June primary. Yet certain Repub “conservative” activists here think being related to two presidents Bush and a governor Bush disqualifies Stapleton from contention.

They’re spreading their anti-Bush blather all over social media, accusing Stapleton of elitism and globalist political leanings because of his family ties. Of course, they have no proof whatsoever; rather Stapleton has worked to defeat abhorrent tax increases and single-payer government healthcare, and he stands steadfast against sanctuary cities and for school choice.   All of which are conservative positions that most actual conservatives applaud.

Instead, this worthy candidate is reviled because his second cousin is George Bush (Walker – get it? George Walker Bush (43) ; George Herbert Walker Bush (41) whose Mom was Dorothy Walker Bush!) Walker Stapleton is the victim of a bigotry that actually mirrors racism in that both of these “isms” are attacks on a person for immutable personal characteristics they can’t help and didn’t choose, whether skin color or relatives. Family-ism let’s call it; the new bigotry.

Just as none of us chooses our race or eye color, we can’t pick our family and it’s preposterous to suggest we think like they do. I don’t know about you but I certainly don’t want to be held responsible for the political positions of my nearest and dearest.  We may have similar DNA but we sure don’t have identical world views. After all, some of them live in California.

George Bush may have made mistakes but would these “conservative” anti-Stapleton partisans rather globalist enviro-terrorist hypocrite and climate hysteric AlGore had won the presidency instead of GW?  Or maybe Vietnam traitor John Kerry?

I think not. This outsider vs. insider stuff is clueless nonsense.  Plus it’s an affront to true conservatives who passionately believe, with Martin Luther King, that a person should be judged by the content of their character, not the color of their skin. Or their family tree.

Walker Stapleton has demonstrated his conservative character.   He voted for President Trump and supports his policies. He’s been elected treasurer twice and has done an admirable job of guarding the Colorado taxpayer larder for the past seven years. Stapleton is easily the most electable and qualified candidate in a field of four Republican gubernatorial primary contestants, most of whom style themselves “outsiders” although one was a small-town mayor 25 years ago and another had a short, undistinguished stint as a statehouse legislator. (And the fourth candidate is a Mitt Romney relative – only in Colorado!)

Republicans simply can’t afford to reject a superb candidate because he’s an “insider.” Get over it, conservatives, and let’s win this thing.