Break Glass and Read Before Voting for Trump

Joy Overbeck
|
Posted: Feb 25, 2016 12:01 AM
Share   Tweet
The opinions expressed by columnists are their own and do not necessarily represent the views of Townhall.com. 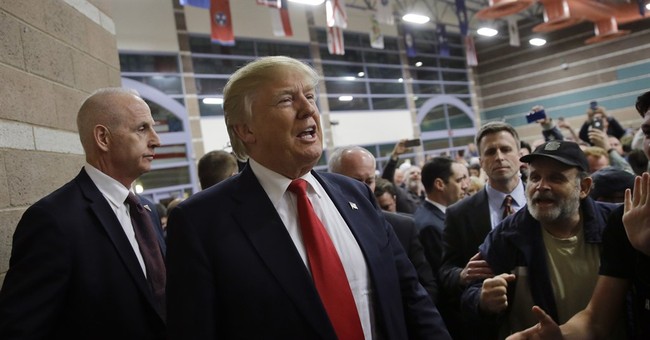 We love him because he’s the fearless mouthpiece of our anger, the John Wayne of political incorrectness, galloping to our rescue with guns blazing against the PC –enforcers who are paralyzing our nation. But John Wayne stood for truth, justice, and the American Way.  Donald Trump his entire life has stood for the very same self-serving pay-to-play corruption and influence peddling he now says he will eradicate from government.

We cheer him because he trumpets the justifiable rage we feel against the Republican establishment that has failed to stop the Obama march of doom and destruction.  But that welling up of proud American spirit we feel at his sticking it to the Chinese, the Russians, the Iranians, and the lobby of the eternally offended is not the emotion on which we should base a presidential decision.

Emotion really has no place here.  We fell for that last time, remember?  No, you can only judge a person’s fitness for the most powerful leadership position on the globe by examining how he has operated in the past – again, something millions failed to do when they fell for the inscrutable luminosity of Barack Obama.

How has Trump behaved in his business and personal life that would indicate what kind of president he would be?  There’s a hint in his anthem: “winning, winning WINNING!” He has “won” his billions with the very same grimy influence buying you expect him to root out of the Washington establishment.  Trump is the business establishment. The only difference: he is a private pay-to-player, and the ones in D.C. are the government you have elected. But there’s no real difference; it’s all about buying and selling influence.

Trump is a giver to the government takers.  By bestowing millions mainly on Democrats for decades, the mogul has purchased official favor from the government players he needs to grease the wheels to build his huge developments.  And he brags about it! After all, he admits the Clintons had to come to his wedding because he “donated” so much money to their causes.  He donated to Hillary in 2002, 2005, 2006, and 2007.  In the service of his own business causes, he has given billions to whoever can benefit him and his projects.  I pay and they do what I say, he crows.

The man has no fixed moral core; he follows the trail of gold wherever it leads.  And so he has hop-scotched from being a registered Republican to Independent to registered Democrat to Independent again and now – surprise -- he’s a Republican again. Shock and awe! In the meantime he told a CNN interviewer that “I probably identify more as a Democrat.” But that was before he was running for president as a Republican. Now he has shifted from being pro-abortion to currently anti-abortion; while formerly supporting gun control and single-payer Canada-like healthcare system, now he’s loving the NRA and wants to shred Obamacare.  He has employed tens of thousands of illegal immigrants during his career but now would deport tens of millions of them and then allow them to come back “legally” never explaining how this monumental and truly absurd return project could be achieved.

Trump’s jumping from party to party and policy to policy ironically mimics his leaping from wife to wife, cheating as he goes, and bounding from bed to bed of the married women he boasts about. It’s who he is; it’s what he does.

And we should expect the same from his presidency.  One day he embraces Vlad (already done that) the next he may feel like bombing the Kremlin just to show him who’s boss. This ability to slide like a human glob of mercury from one self-serving position to the next was recognized by Jimmy Carter when he said that he would pick Trump over Ted Cruz for president.  Why? “Trump has proven already that he's completely malleable,” said Carter. “I don't think he has any fixed opinions that he would really go to the White House and fight for.” Gee, just like the present GOP leadership.

He brags about how unifying he would be because he gets along great with everybody – especially uber-liberal leaders Nancy Pelosi and Harry Reid. Real Republicans know that “compromise” means being rolled by the Dems.  We unabashedly despise Pelosi and Reid for the sinister part they’ve played as faithful co-conspirators in Obama’s dismantling of our nation’s Constitution, prosperity, and status in the world. But Trump is just crazy about them!

Donald Trump is temperamentally and perhaps ideologically more like Barack Obama even than Hillary or Bernie. His towering Obama-like ego makes him as overly sensitive to criticism as is the president; just ask Obama’s generals.  Like Obama, his captivating rhetoric is what hooks the crowds, not his substance.  Like Obama, he’s a political shape-shifter, a blank slate on which voters can write their hopes and dreams.

He doesn’t call out his rivals for their policies but instead calls them nasty names, just like Obama only louder and cruder.  Trump even accused the mild-mannered Dr. Ben Carson of being a child molester.  Like Obama, Trump is a my-way-or-the-highway guy.  Obama’s Trump-like arrogance and narcissism have given us a swamp of very destructive unconstitutional executive orders. Would Trump’s obsession to “WIN!” mean just more Obama-style tyranny?  Would he create new illegal law, as has Obama with his immigration executive orders; and would he have government agencies set new rules as Obama has with EPA climate change when Congress said no? You can bet your sweet patootie. Because, you see, he WINS.

But can he win the general election?  Probably not. Many polls show both Cruz and Rubio winning against Hillary Clinton but only Trump loses to her.  Trump has hugely high negatives,  60 percent or more nationwide, higher than any major party candidate since 1992 according to Gallup.  And Trump has enormous negatives that nobody has yet explored except the Democratic operatives who are reported to be even now filming people whose lives have been destroyed by after-shocks from Trump’s four bankruptcies.

Remember the bogus Democrat charge that Mitt Romney was somehow responsible for an ex-employee’s wife’s cancer death?  It was devastating to Romney’s campaign. You can bet the elderly lady who Trump finagled out of her home for his limo parking lot using eminent domain has been tracked down by the opposition team. She will be an excellent witness for his evil Republican heartlessness.  These pros will use Trump’s wrecking-ball career history to skin him like a baby rabbit.

This time we can’t confuse brashness with strength of character. We can’t believe that self-confidence is the same as competence. Some very intelligent people think The Donald is a secret Democrat.  I’d say, not so secret.

We need a straight-shooting, solid conservative who reveres the constitution and stands for less government intrusion, a strong military, lower taxes, and preservation of our individual liberties in the Bill of Rights. Only one presidential candidate has actually done all that in the Senate itself and been mocked and chastised for it by his fellow Republicans. That candidate is Ted Cruz.