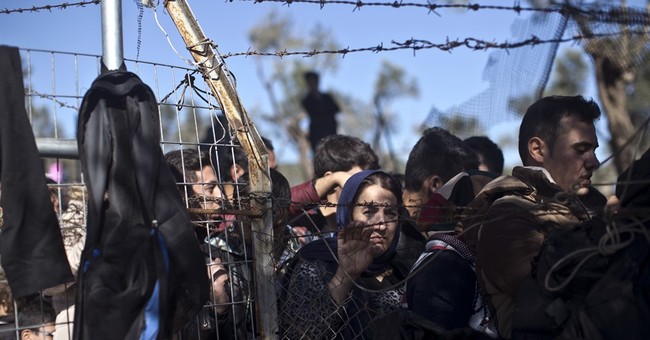 Whether we will see more bloody slaughter in the name of jihad depends on if we can separate the murder-bent America-haters from the innocent Muslim refugees that Obama wants to admit to our nation by the tens of thousands. This could well be -- impossible.

Recent polls show that massive numbers of Muslims worldwide, those who Trump wants to temporarily halt from coming to the US, are ISIS supporters and/or in favor of Islamic terrorism despite Obama’s constant assurances that Islam is a “religion of peace.”

Following the November Paris terror attacks, one in four young Muslims in Britain said they sympathize with those who have fled the country to fight for ISIS according to The Sun newspaper. Disturbingly, Britain is one of the 38 favored nations whose residents get preferential visa waivers when coming to the U.S.

A recent survey conducted in the Arabic language by AlJazeera.net, the website of the Al Jazeera Arabic television channel, is even more shocking. Over 81% of the more than 38,000 respondents overwhelmingly supported the Islamic State terrorist group, voting “YES” on whether they approved of ISIS’s blood-soaked conquests in the region.

Of course approving the ISIS behead-and-conquer agenda doesn’t necessarily mean these terrorist sympathizers will assemble a garage-full of AK-47’s and pipe bombs. However, cold hard reason would suggest they are far more likely to do so than the 19 percent who don’t like ISIS.

Given the stunning failure of our Homeland “Security” officials to catch the female terrorist with their penetrating fiancé visa security questions like “are you or a terrorist or do you expect to become one after you enter the U.S?” our national safety is essentially a matter of jihadi roulette. So is Trump’s call for a temporary halt to Muslim immigration crazy or racist or simply common sense?

It’s a numbers game. There are about 1.5 billion Muslims in the world; if only one in 100 want to come here and murder Americans in the name of Islam, that’s 15 million potential jihad fighters that could boldly stroll right through our torn, hole-riddled non-safety net. If you had a weapon with a 100-bullet magazine that has one bullet in the chamber, would you hold that weapon to your head and pull the trigger?

According to a recent National Review piece by David French, extrapolating from the Spring 2015 Survey by Pew Research that polled Muslims of many nations, “roughly 50 million express sympathy for a terrorist army that burns prisoners alive, throws gay men from buildings, and beheads political opponents. In Pakistan a horrifying 72 percent couldn’t bring themselves to express an unfavorable view of ISIS.”  Even in Turkey, a Muslim nation that, like Pakistan, is supposedly our “ally” against ISIS, that sobering number is 27 percent.

When our security apparatus is not being outrageously incompetent in vetting terrorist brides, it’s overwhelmed: the FBI is reportedly following over 1000 suspicious Muslim individuals in all 50 states. With law enforcement   exhausted by this current challenge, I can’t think of a single reason why we would invite more potential throat-slitters into the country and further overwhelm our security resources.

Donald Trump’s proposal to temporarily halt Muslim immigrants isn’t Islamophobic any more than was Jimmy Carter’s similar action after Iran’s Muslim ayatollah rulers held over 50 Americans hostage for 444 days starting in 1979.  In the name of national security, President Carter banned Iranians from entering the U.S. and deported thousands of Iranian students already here. In essence, Carter pioneered the roundly-deplored Trump sin of religious profiling since approximately 99.9 percent of Iranians – then as now – are Muslims.

Carter’s actions as well as other governmental exclusions or suspensions of certain immigrants were upheld by the Supreme Court a number of times, including a 1977 case in which the justices noted they “have long recognized the power to expel or exclude aliens as a fundamental sovereign attribute exercised by the government’s political departments largely immune from judicial control.”

That means the howling media mob as well as the high foreheads from both parties piling on Trump are spectacularly wrong about the unconstitutionality of his suggestion. Too bad, Trump-shamers.

And then there’s the insufferable “that’s not who we are” catechism incessantly preached at us by the president and recently parroted by Republican Speaker of the House Paul Ryan no less. So who are we really? The American people are showing who they are by further elevating Trump in the polls, supporting him despite his tar-and-feathering.

The American people are a stubbornly commonsensical bunch. They are a generous, welcoming people but they will always choose the continued existence of their nation and their loved ones over the demi-god of political correctness. And to protect family and country, they will choose whatever is necessary, including a temporary pause in the immigration of those adhering to a tyrannical statist ideology who may pose a real threat.