Josh Goldstein
|
Posted: May 24, 2017 12:01 AM
Share   Tweet
The opinions expressed by columnists are their own and do not necessarily represent the views of Townhall.com. 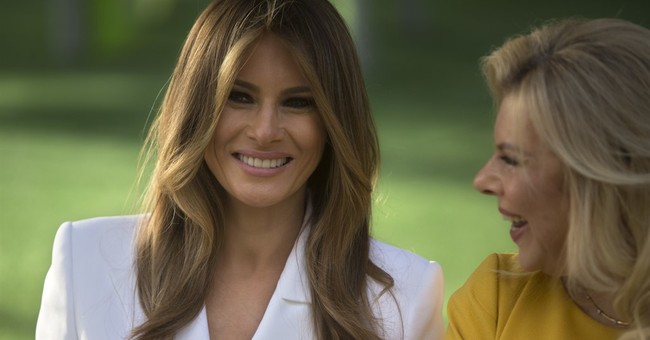 So called liberals, supposedly dedicated to the advancement of women, attack the first lady of the United States while forgetting the stoning of women in Islamic countries.  Unbelievable.

First Lady Melania Trump was recently subject of one of the most repressive articles against an American woman.

The fake and failed Clinton News Network (CNN) opinion hit piece essentially said that of course Mrs. Trump is getting accolades from the Saudi Arabian press because she is “conservative” in her dress and manner.  Please.

Maybe CNN should run some more articles about Islamic genital mutilation, stoning of women, sodomy of minors, or the oppressive judicial system that requires more witnesses on behalf of the woman than a man in judicial proceedings.  However, it is doubtful they will.  The Clinton News Network certainly won’t quote the Quran which says it is OK to beat a wife if she is disobedient (Surah 4:34), that Jews and Christians are like monkeys (Surah 5:30), and that Muslims must “fight until there is no more Fitmah (disbelief and polytheism, i.e worshipping others besides Allah.” (Surah 8:39).

The writer of the opinion piece states some of the wrongs in Saudi Arabia such as women not being able to drive, but completely ignored the greater evils I named above; evils that are prevalent in most of the Islamic world.  Further, the author will not even go against the ideology that says these evils are OK.

But these are the priorities of the left.  They want to run down their own first lady to score a cheap political point.  Not done attacking the sitting president, who is trying to build the Arab equivalent of NATO to fight ISIS, they keep attacking his wife.  They can’t win tough wars, so they try to win elections.  They complain about contraception in the U.S., yet ignore the genital mutilation of their sisters around the world.

These leftists are fools, and gutless ones at that, by attacking what they think is oppression here in America while not calling out the greatest evils in the world today.  Radical Islam is an ideology that brought down the World Trade Center, sees infiltration in America (including its military), and believes it is OK to use children as suicide bombers.  There is no arguing with such a philosophy and there is little arguing with the left.

We should not be surprised but just to recap, post-modern progressivism is not an ideology of love and peace but an ideology of power and hatred.  Post-modern progressivism is not concerned with the defenseless in our cities or in Middle America.  We have Islamic terrorism running rampant through power and force and we have leftist terrorism through political correctness.  It is a natural marriage that radical Islam will use until it then kills off the leftists it used to do its bidding.

As far as Melania Trump, she is above all this.  She is a strong confident woman.  She has made her own choices.  She has made a career and then married and had a family.  She stayed in New York so her son could at least finish out his school year, setting an example of family being more important than career.

She has moved us with her smile, with her tears at the National Cathedral, and her rendition of the Lord’s Prayer.  Mrs. Trump is loved and respected precisely for whom she is.  Bringing femininity, beauty, grace, dignity, and a sense of style, Mrs. Trump is the epitome of everything the left hates, is not, and will never be.

Mrs. Trump standing by her husband does not make her an object.   It makes her a wife and makes it even more likely that when she does speak, we listen.  Melania Trump does not need to do anything except being the good person, wife, and mother she is; a true first lady in every sense of the phrase.