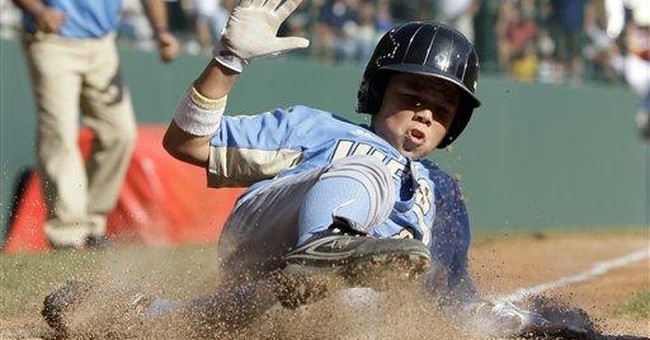 I am an assistant coach on my middle son’s youth football team. Football practice begins in August and I have spent the last two weeks reading up on defensive alignments, surfing coaching websites, and sending e-mail to some of the high school coaches in the area begging for coaching tips. If I watch one more video of conditioning exercises for defensive linemen my head is going to explode. I have begun dreaming in “X’s” and “O’s.”

Of course, that is what I say today. Tomorrow, I will get up and begin the routine all over again. Why? Well, I guess it’s because I have grown to love coaching. Unless one loves it, there is really no other reason to be a youth coach.

A person certainly won’t get rich coaching youth sports. In fact, often a youth coach will lose money over the course of a season. Every coach I know spends his own money to pay for extra equipment and materials. Most of the coaches I know spend additional money on books and clinics in order to expand their knowledge. More than one coach I know has paid the registration fee for a boy whose parents were having financial difficulties. These coaches didn’t open their wallets because the boy was a superstar, (although I have also witnessed performance purchasing). Rather, the coach paid the fee because the boy wanted to play.

The truth is that coaching can often seem like one big headache after another. A coach must contend with equipment shortages, limited practice time, and bizarre and negative interactions with parents. Buy a youth coach a beer and let him regale you with tales of parents gone wild. Every coach has at least one such story. And success doesn’t guarantee that parents will behave as if they have some sense. In some instances winning actually makes them behave worse. I had two parents threaten me with violence because during a game I told their son to hustle. Our team was undefeated!

According to The Center for Kids First, each year 40-50 million children participate in youth sports. The vast majority of those children--85%--are coached by a father of one of the children on the team. Youth coaches spend an average of 11 hours per week with their young charges. That’s a lot of children, and a lot of fathers who volunteer a lot of time.

Put another way, millions of parents place the physical and emotional well-being of their children into the hands of a small number of men, most of whom are married and have children of their own.

And much is expected from these mostly untrained volunteers. Youth coaches are asked to be teachers, strategists, babysitters, nurses, and social workers.

Parents enroll their children in youth sports in hope that their children will learn physical skills that will allow them to stay active throughout their lives, that they will develop a sense of belonging, and that it will promote their moral development. In other words: Sports build character. But this vaunted character that comes from participation in organized sports does not happen by magic; picking up a ball does not automatically strengthen a child’s moral fiber. Character must be taught. And to whom does the duty fall? The youth coach.

And when there is dysfunction in a child’s home the problems tend to follow the players onto the field. When the parents are experiencing marital difficulties, when there is alcoholism or abuse, or when the family dog dies, these volunteers are still expected to persevere. With no professional training--and even less warning--youth coaches must navigate the emotional waters, continue to teach, and win on Saturday!

But, I do love it. I love seeing the eagerness in the boys’ eyes; I love hearing their young laughter; I enjoy watching the passion with which they play. I love witnessing their growth and maturation over the course of a season. And I love knowing that in some small way the work I do may contribute to their life-long love of the game of football.

So, I am going to put down my study for today. However, tomorrow I will begin watching a series of DVDs on how to teach the 44-Stack defense to 11-year old boys.

It may be selfish, but this Father’s Day I am also going to lift a glass of whatever-I-happen-to-be-drinking and salute the dads that volunteer, the fathers that take the time to learn a sport they have never played, or to re-educate themselves in a sport they have not played in years. We parents put our sons and daughters into their hands and ask that they teach our precious ones the value of hard work, the necessity of discipline, and most important, the joy of competitive sports.

God bless them, and cheers!