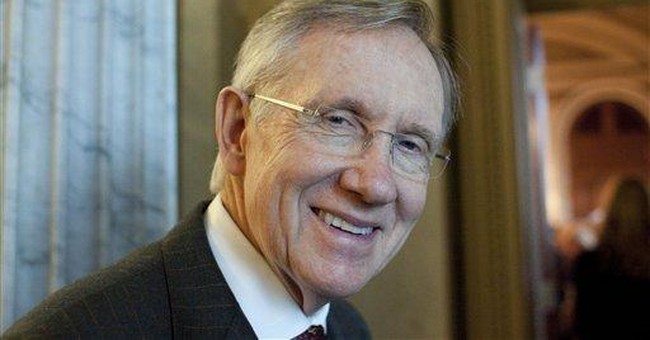 The classical poet A.E. Housman wrote, “For nature, heartless, witless nature…” He might have said the same thing about history which like nature is neither cruel nor kind, right or wrong; it is simply indifferent. It has, as they say, no dog in the fight.

If, however, one is looking back and telling history it might then be said that one is right or wrong about history. One might say as much about Senate Majority leader Harry Reid (D-NV), who was wrong about history in his remarks accusing Republicans opposed to Democratic healthcare reform of using the same stalling tactics as the defenders of slavery and Jim Crow.

In remarks intended to further paint the political right as immoral, racist and evil, Reid offered that, "Instead of joining us on the right side of history, all the Republicans can come up with is, 'slow down, stop everything, let's start over.' If you think you've heard these same excuses before, you're right…When this country belatedly recognized the wrongs of slavery, there were those who dug in their heels and said 'slow down, it's too early, things aren't bad enough.' "

Reid is obviously confused. Republicans have no power to block passage of the senate healthcare reform bill. Nor are Republicans delaying passage of Obamacare. If Healthcare reform is being delayed and/or eventually dies it will be because one or more of Reid’s fellow Democrats decided to do the right thing and kill this Frankenbill where it lays.

Ironically, had Reid been speaking to Democrats he would not only have been currently correct, but historically accurate as well.

It was of course the Democrat Party that was late recognizing the wrongs of slavery; it was Democrats that wrote the Jim Crow laws and enforced them with fire hoses and attack dogs; it was the progressive hero Woodrow Wilson who segregated the federal government and locked Blacks out of jobs; it was the democrat party that filibustered passage of the civil rights acts of 1964 and ’65 and in fact has opposed every piece of civil rights legislation written since the end of the civil war.

Reid’s remarks might also be more properly directed at Democrats given that the reasoning used by new liberals of the 21st century and Democrats of the 19th century bear a striking similarity.

What is slavery except the usurping of one mans liberty and private property in service of another man? The defenders of slavery argued that the founding was a lie, that all men were in fact not created equal, that, in fact – to borrow from Thomas Jefferson – some were “born with saddles and others with boots and spurs to ride them.” They pointed to advances in science and philosophy that proved Black people were a sub-species of human and thus justified their defense of slavery as a moral good. They further argued that the right to self determination meant slave owners could transport their chattel into non-slave states thus making slavery the law of the land through the back door. The defenders of slavery declared that it was they who were on the “right side” of history and the fact of slavery was proof.

The argument is almost indistinguishable from the case the left makes in defense of abortion, which they demand be a part of what they call healthcare reform. The right to self-determination is sacred yet does not apply to children in utero as they are not human; the Rights articulated in the Declaration do not apply to them. We are an advanced society and history demands that we recognize that abortion is a moral good.

Similar arguments run through most of the new lefts social agenda.

They will argue that the founders of this great nation never intended that the rights they spoke of applied to all people in all times. For Reid and the rest of his Democratic cohorts some men were in fact born with saddles and others meant to ride them. To the new left a just government - a moral and compassionate government-is one that secures the newly discovered right to healthcare (or housing; or a job; or food) by confiscating the property of some in service to others. The fact that socialist Europe has already moved in that direction is proof enough that they are on the “right side” of history.

Reid invokes the image of America’s original sin in order to preserve the lefts inflated sense of its own virtue. In 2010 who but the most backward of all thinkers would side with the defenders of slavery? Who indeed?

Harry Reid is free to demonize Republicans and turn the past into fiction; it won’t make a bit of difference. It won’t make the healthcare reform bill any less terrible and it won’t make history anymore than an indifferent and no doubt amused observer.