Enough With This Monument Removal Madness!

José Niño
|
Posted: Jun 09, 2020 1:19 PM
Share   Tweet
The opinions expressed by columnists are their own and do not necessarily represent the views of Townhall.com. 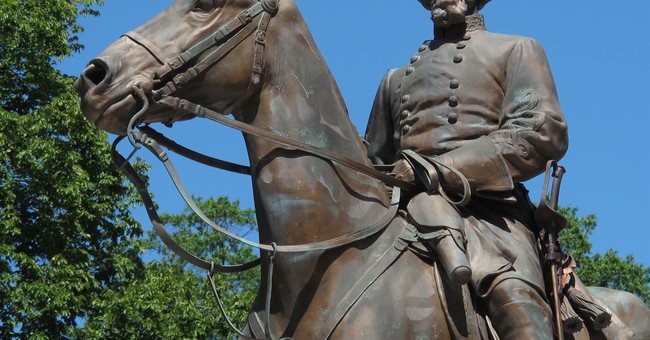 Renowned Civil War General Nathan Bedford Forrest and his wife’s remains are in the process of being removed from the Health Sciences Park in Memphis.

We can thank the activist Left for going the extra mile to defend us from such dangerous artifacts of American history. Nothing screams “the civil rights battle of our time” like knocking down monuments and exhuming corpses of evil, racist white men. Forget about valor on the battlefield or taking up arms to defend your homeland and people from invaders, having “problematic” views is ground for having your legacy annihilated by social radicals.

The only solace that lovers of Confederate history could find is that Forrest and his wife’s remains will likely be moved to the National Confederate Museum in Columbia, Tennessee thanks to the efforts of the Sons of Confederate Veterans. Yes, there are still some Americans who believe in preserving their history and don’t want to see the country become a deracinated husk of a nation.

However, let’s not lose sight of the bigger picture. This latest monument removal saga is part of the hysteria that has kicked off since the Charlottesville protests of 2017 where the Looney Left has been on the war path in trying to find whatever confederate statues they can get their hands on and tear them down. When you think about it, this is only one theatre of a broader cultural war the managerial Left has been prosecuting since the 1960s.

Forrest’s case makes him a low-hanging fruit not only because of his confederate background but also as the founder of the first iteration of the Ku Klux Klan following the Civil War. This stage of Forrest’s life is more than enough to make the Left go apoplectic. Funny enough, Forrest, like many humans throughout her history, was able to change his mind about the relationship between the races towards the end of his life. His speech before the Independent Order of Pole-Bearers Association, a black civil rights organization based in Memphis, indicated his desire for the races to reconcile and live in harmony. Bet you won’t find any mention of that from the limited selection of history textbooks that our PC gatekeepers will allow you to read.

Let’s not kid ourselves. Knocking down Confederate monuments and sullying the legacy of Confederate officers are only the first steps; the political correctness mob will then proceed to target the Founding Fathers and other figures of American history in their quest to destroy American history.

If you think historical erasure is just confined to the Home of the Brave, let’s shift our focus across the pond. Last October, the Spanish government exhumed the remains of dictator Francisco Franco and moved the dictator’s body from Valle de los Caídos (The Valley of the Fallen) and placed it in a family cemetery north of Madrid. The Valley of the Fallen served as his place of burial from the time of his death in 1975 until 2019. Under the enlightened rule of Socialist Prime Minister Pedro Sánchez, Spain had to do its global duty to fight against the eternal bugaboo of “Fascism” by moving Franco’s remains.

Forget about Franco’s necessary actions to prevent Spain from being subjected to a radical Leftist takeover or his successive tutelage of Spain that put the country on the path to modernity, the very fact he aligned with the traditionalist Right of Spain is grounds for removal.

As one of the historic nations least impacted by mass migration, Spain remains a hold-out against the EU’s agenda for a global homogenized society. Well, at least for now. The current government under Prime Minister Sánchez is working assiduously to “enrich” the country through refugee resettlement.

The sons of Agamemnon and Julius Caesar face existential threats from policies pursued by political elites such as mass migration, secularization, political correctness culture, and mass degeneracy. Sprinkle in the relentless desire to erase history, and you have the recipe for the wholesale castration of a nation. With these trends in mind, Europe and the rest of the West will be transformed into soulless, co-working spaces and strip malls for Davos Men to stroll through while the rest of us reactionaries must toil at our increasingly politically correct workplaces. Hey, at least we can subject ourselves to non-stop sensory overload on our TVs, Internet, or iPhones. Modernity has some of its benefits.

On the other hand, let’s take a look at countries like Israel and China — serious countries that actually bother to preserve their national character and don’t engage in the pathological self-flagellation that afflicts Western polities.

Historian Paul Gottfried offered some interesting observations about how the aforementioned countries treat monuments erected by foreign overlords at certain points of their histories:

“On a visit to Hong Kong, I noticed that the current Chinese government had not renamed the parks and other public sites that celebrated English monarchs, nor had it pulled down statues erected during British imperial rule. Although at least nominally communist, Chinese state officials look after these remnants of English rule with obvious care. In Israel, the government tends to the temples and monuments that Roman conquerors left behind, even though those same Romans slaughtered ancient Jews and destroyed their Second Temple.”

Gottfried concluded, “This seems infinitely more civilized than what the cultural Left has now unleashed on our shores.” Shi-Huangdi monuments can rest easy knowing that they won’t be toppled by angry Chinese citizens.

In the global consumer imperium that dots the post-Western “West”, the very least we could ask for is that the artifacts of our eventful past stay intact. As our country is demographically transformed via mass migration and traditional gender norms are being turned upside down, there are hardly any fond memories of a once stable American past to idolize.

If we can’t even preserve our own history, the U.S. might as well disappear into the ether and become another strip mine for predatory globalists to exploit.