When in the Course of Political Doublespeak 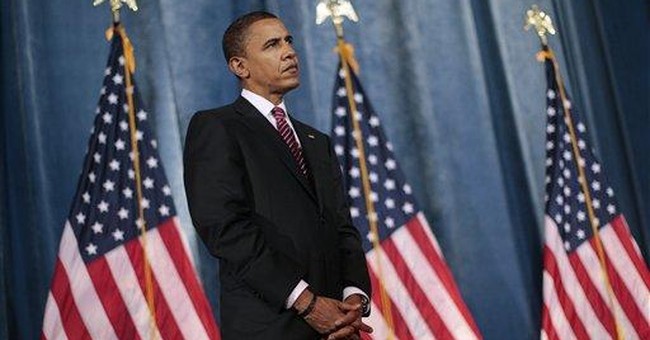 In recent weeks, Sen. Barack Obama has found himself having to make two major speeches to address significant, unavoidable issues facing his campaign. The first was his original attempt at addressing his race-mad mentor, pastor, and family friend, Rev. Jeremiah Wright. This week has seen his answer to questions about his patriotism.

Both speeches use the same formula: hearken to America's founding, hail the shining ideals of America's revolutionary liberty, invoke the greatness and even the rhetoric of American luminaries gone by, and then subtly change the focus to suggest that the next step for American liberty is to become a socialized nanny state for the greater good.

In the Wright speech, Obama used the phrase "to form a more perfect Union" from the Preamble to the Constitution of the United States as his starting point and brought it to this conclusion, what he saw as the way to make the union more perfect: "It is not enough to give health care to the sick, or jobs to the jobless, or education to our children. But it is where we start."

In his patriotism speech, Obama starts with the Founders, makes some laudable comments about their revolutionary fight and the risks they took for "the idea of God-given, inalienable rights" and hallows the Declaration of Independence. Toward the end, he even bemoans "[t]he loss of quality civic education from so many of our classrooms has left too many young Americans without the most basic knowledge of who our forefathers are, or what they did, or the significance of the founding documents that bear their names."

Such rhetoric is welcome; it upholds and reinforces the importance of America's founding ideals, the standard of liberty by which all subsequent political proposals should be judged. As such, Obama's rhetoric in that respect is welcome even if it is merely a pro forma invocation of the American scripture.

Appealing to America's founding freedoms is mere matter of form in Obama's speeches; it's the sort of thing he uses to make his call for nanny statism seem "American" rather than just more rehashed European nonsense. Obama speaks almost reverently of liberty, and in this speech he especially praises America's founding protections of the pursuit of happiness ("the right to pursue our individual dreams," "we are not constrained by the accident of birth but can make of our lives what we will"), but then he puts forth as "patriotic" manifold ways to curtail those very freedoms. Raising taxes, growing the federal government, taking economic choices away from people, burdening people with more regulations — those all hinder our right to pursue our individual dreams.

After three and a half paragraphs on the Founders, Obama gives what he defines as the "big issues" in the election: "health care, jobs, energy, education, and retirement security." Suffice it to say that none of those are areas in which Obama is interested in expanding our right to follow our own dreams. His statist policy prescriptions on all those issues are far removed from the Founders' vision of liberty as freedom from government interference.

Consider that one of the complaints against King George III given in the Declaration of Independence is that, "He has erected a multitude of New Offices, and sent hither swarms of Officers to harrass our People, and eat out their substance." Obama dreams of setting up a multitude of new government offices that would harass people and consume more and more of their incomes. He would also institute hosts of new government regulations and prohibitions. Agreeing to it all would, in his view, answer "the call to sacrifice for the country’s greater good."

Further on in his speech, Obama gives more details on what he considers patriotic. What he doesn't list is as instructive as what he includes. One may infer that Obama considers the following patriotic:

Happily for those who love freedom, Obama's apparent need to remind us of the Founders' vision of American liberty in order to justify (or cloak) his calls for government policies antithetical to it may prove his policies' undoing. One doesn't set out to "change" what one acknowledges — after Ronald Reagan and Abraham Lincoln before him — is "the last, best hope of earth."

So Obama conscribes himself within the framework of American liberty, and in doing so he has set up a standard entirely contrary to his worldview, a cynical vision that defines "hope" as the federal government providing American citizens with their health care, their jobs, the "right" kind of energy to use, their education, and their income after retirement.

Such a garish incongruity is impossible to hide for long. If this is a season of hope, then let us hope that it becomes manifest to voters before Election Day, rather than afterward.