Jonathan Feldstein
|
Posted: Jan 15, 2022 12:01 AM
Share   Tweet
The opinions expressed by columnists are their own and do not necessarily represent the views of Townhall.com. 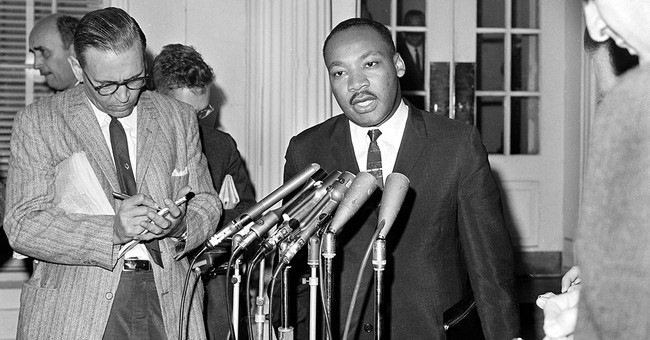 It was one of his two most famous speeches, and it was his last.  On April 3, 1968, the night before his assassination, Dr. Martin Luther King Jr. delivered an impromptu speech at the Mason Temple in Memphis in the midst of a sanitation workers strike.  The event was the Church of God in Christ (COGIC) annual April Call. Known as the “Mountaintop” speech, Dr. King spoke without notes for nearly 45 minutes.  His conclusion is probably the best-known part. “But it doesn't matter with me now. Because I've been to the mountaintop. And I don't mind. Like anybody, I would like to live a long life. Longevity has its place. But I'm not concerned about that now. I just want to do God's will. And He's allowed me to go up to the mountain. And I've looked over. And I've seen the promised land. I may not get there with you. But I want you to know tonight, that we, as a people, will get to the promised land. And I'm happy, tonight. I'm not worried about anything. I'm not fearing any man. Mine eyes have seen the glory of the coming of the Lord.”

Dr. King’s remarks were delivered with the rousing inflection for which he was known.  On a close analysis of the rest of his speech, what’s remarkable is that Dr. King was not speaking metaphorically about the mountaintop. He was speaking prophetically. He was speaking about Israel, about being in Jerusalem.

In fact, the literal mountaintop about which Dr. King spoke is Jerusalem. In the several minutes leading up to his dramatic concluding remarks, Dr. King spoke of Jerusalem five times. All the more remarkable is that Dr. King visited Jerusalem as a young man, as what today we’d call a millennial. But unlike today’s millennials, sometimes known for moral relativism and biblical ambiguity, Dr. King understood the significance of Jerusalem, and of Israel, to him as a Christian, and to black America.

He espoused that moral clarity in comments about Zionism some time before: “How easy it should be to understand and support the right of the Jewish people to live in their ancient Land of Israel.  All men of goodwill exalt in the fulfillment of God’s promise that His people should return in joy to rebuild their plundered Land. This is Zionism. Nothing more and nothing less.”

Dr. King further exhibited that moral clarity regarding Israel in a wide range of public comments.  In a 1967 interview, Dr. Martin Luther King Jr. stated: “…the whole world must see that Israel must exist and has the right to exist, and is one of the great outposts of democracy in the world.”

The following year, just days before his assassination, during a panel discussion at the March 25th Rabbinical Assembly, Dr. King said: “The response of some of the so-called young militants does not represent the position of the vast majority of Negroes. There are some who are color-consumed, and they see a kind of mystique in blackness or in being colored, and anything non-colored is condemned. We do not follow that course…Peace for Israel means security, and we must stand with all our might to protect its right to exist, its territorial integrity. I see Israel as one of the great outposts of democracy in the world, and a marvelous example of what can be done, how desert land can be transformed into an oasis of brotherhood and democracy. Peace for Israel means security and that security must be a reality.”

Dr. King understood the significance of Israel and his visit to Jerusalem was remarkable in many ways.  But he also understood and indeed reflected on the significance of Israel to black slaves in the US. As they learned Biblical stories of God’s grace and salvation, particularly of the liberation and exodus of the Jewish people from Egypt, it gave them hope albeit living in often unspeakable conditions as other people’s property. Their lack of freedom juxtaposed by the dramatic freeing of the Jewish people from hundreds of years of slavery in Egypt provided inspiration rooted in their faith.

Because of the historic significance of Biblical Israel among black slaves, and in the black church in general, five decades later, one man has become the embodiment of Dr. King’s parting prophetic words in Memphis that related to modern Israel.  “I may not get there with you. But I want you to know tonight, that we, as a people, will get to the promised land.” Since the fall of 2020, Dr. Glenn Plummer has assumed his position as COGIC’s Bishop of Israel, in Israel, with the goal to build bridges between the black church and Israel. He has an important role and a broad vision behind his presence in Israel. In many ways, he is the bridge to Dr. King’s vision, and the realization of “we as a people will get to the promised land.” COGIC is the largest black church in the world and, as such, Bishop Plummer is well placed to make Dr. King’s vision into a reality.

As we celebrate Dr. King’s birth and legacy this week, let us also celebrate and model his unambiguous support for Israel and its significance historically and theologically. We do so because it is the historic reality, but also in the wake of those who try to undermine the significance of Israel or the important relationship between blacks and Jews in America, and Israel in Africa, for generations.

Author's Note: Join the conversation with Bishop Glenn Plummer as we remember and honor Dr. King, and discuss the significance of Israel in the black church.