Jonathan Feldstein
|
Posted: Sep 03, 2019 8:27 AM
Share   Tweet
The opinions expressed by columnists are their own and do not necessarily represent the views of Townhall.com. 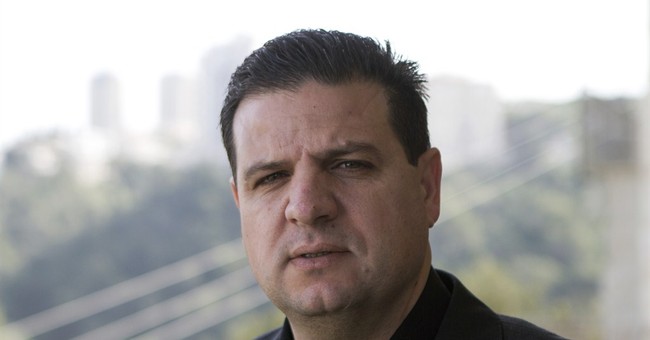 In case you missed it, Israel will be holding national elections on September 17. Yes, this is the second time this year. Hopefully the outcome will not be a stalemate like last time.  Please enjoy this series of articles offering insight beyond whether Bibi will be elected that is all relevant to that question, which you are probably not getting overseas.*

Recently, MK Ayman Odeh, the head of Israel’s Arab “Joint List” faction said he is willing to join a center-left government under certain conditions following the upcoming election.  His statement created backlash both among nationalist (mostly) Jewish parties, as well as from members of his own Arab coalition. It also represented a change in the traditional opposition of Arab parties to join any government led by a Jewish Zionist party, of any political leaning. Arab parties have never served in an Israeli coalition government, but have supported minority left-wing governments from the outside.

Odeh’s comments could represent a shift in thinking, a slip of the tongue, a trial balloon, or simply clever politicking. Let’s have a look.

Odds are slim of this happening, if only because Odeh’s Joint List cohorts are fervently opposed, including members of Odeh’s own “Hadash” party, considered the least hostile within the Joint List, most of whom have rejected the idea. MK Aida Touma-Sliman, No. 2 in the Hadash party, also tweeted: “We will not sit in a government of occupation, wars and racism. Our terms do not exist in the current political map.”

The Joint List was formed before Israel’s 2015 elections, to ensure that there would remain a large block of Arab parties represented.  It included parties representing a range of ideologies including socialists, nationalists, secularists, and Islamists. Since then, Arab parties have grown, reaching a peak of over 10 percent of seats of Israel’s Knesset after the 2015 election.

The assumption, even if theoretical, is that the only government Odeh or the Joint List would support is one led by the head of the Blue and White Party, retired general Benny Gantz.  Odeh said, “if we see that there is some common direction, we will seriously consider joining him.”

Earlier in the month he made a similar statement “I don’t think that Gantz is ready. He would prefer to form a national unity government [with Likud] over what we want. But if he turns to us and he is going in the right direction of peace and equality, we will listen. I don’t see it happening because of a lot of bad water under the bridge. We are not in his pocket. He will have to come to us.”

It's possible that this was a calculated strategy to pick up votes, particularly from Arabs who would otherwise vote for a left-wing Zionist Jewish party, and think that a vote for the Joint List could lead to greater Arab representation and influence if not a greater push toward peace.

Right wing parties have countered with the message that voting for a left-wing party, particularly Blue and White, which is trying to depict itself as centrist, could break the taboo on bringing Arab parties into a government. Indeed, Likud’s Public Security Minister Gilad Erdan was quick to tweet “now it is clear that whoever votes Blue and White will likely get a left-wing government with a terror supporter.” He also criticized Odeh’s conditions for joining a government.

Gantz did not comment on Odeh’s statement, but previously did not categorically rule out joining with the Joint List. Earlier he had said he’d only form a coalition with Zionist parties, ruling out both Israel’s Arab and possibly Ultra-Orthodox parties. Yet fellow Blue and White MKs Gabi Ashkenazi and Yoaz Hendel ruled out the possibility of a future government partnership altogether as a way to buttress the arguments from the right.

“We think Israel’s Arab citizens are equal and that’s how we should treat them,” and added “We won’t be able to sit [in a government] with the Arab parties that don’t recognize Israel as the state of the Jewish people.”

MK Hendel offered, “We respect Israel’s Arab citizens and view them as citizens worthy of all rights, but we will not sit with the Arab parties which fundamentally reject Israel’s existence as a Jewish state. Full stop.”

The politicking among Israeli-Jewish parties is especially strident because there’s been a conflict of increased radicalization in the Arab community, including abetting terrorists, joining ISIS, and well as Arab members of Knesset who have called for, supported and participated in violence against Israel in what seems to be increasing incidents in the past generation.

In a backward and somewhat Israeli way of presenting a platform, and standing firm in its positions, Odeh listed conditions for joining a government some of which also are essentially non-starters.  These include ending the “occupation,” renewal of peace negotiations with the Palestinians, overturning last year’s controversial Jewish nation-state law, establishment of a new Arab city, an end to the demolition of illegal Palestinian homes in the West Bank, cancellating of a law that strengthened punishments for construction-related offense, stricter enforcement of gun laws in the Arab-Israeli communities, etc.

Another challenge with joining a Gantz-led government is that Gantz only recently retired from a career in the IDF, rising to the rank of General, and serving as Chief of Staff. On that level, Arabs would have a hard time joining him because he oversaw many military operations against Palestinian-Arab terrorists, which some Arab extremists call “war crimes,” and the support of Israeli-Arabs would likely be taken as a slap by Palestinian-Arabs.

Ironically while Israeli-Arabs often complain of unequal representation, in 2015 the Joint List won 13 seats, and became the second largest opposition party. Next month, depending on which parties win how many votes, and who forms the next government, it’s possible to see the Joint List having the largest number of seats among opposition parties, becoming the leader of the opposition for the first time, and entitling them to classified security and other briefings.

And it’s no less possible that, Odeh, knowing this, is trying to peel off Arab votes from what are otherwise left-wing Jewish Zionist parties with the awareness that the left-wing parties are likely to be in the opposition anyway and having the Arab Joint List become the leader of the opposition, not just in rhetoric but with a legal standing, would make a difference. It certainly would underscore Israel’s place as a democracy having anti-Zionist Arab Knesset members enjoying the status and privileges of such a position as they claim Israel is undemocratic and discriminates against its Arab citizens.

There are many factors that will influence the outcome of the election. The important thing is to pray that it is a good outcome for Israel and all its citizens, Arabs and Jews.

*For background about the electoral system from prior to the election in April, please feel free to contact me, firstpersonIsrael@gmail.com.