The Federal Force and the Farce: The Dark Side of the New Federal Education Law 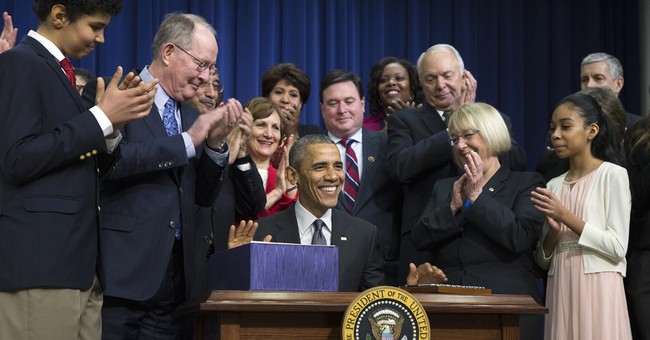 Nearly 40 years ago, Star Wars burst onto cinema screens around the country, eventually earning some $460 million at the box office. Just in time for Christmas, the Force returns Dec. 18 with the long-awaited seventh installment in the series (ominously titled “The Force Awakens”).

Just after Star Wars first arrived in 1977, lawmakers in Washington gave us the Empire of education bureaucracy, the U.S. Department of Education. And in time for the Holidays, lawmakers have re-launched the federal law governing K-12, now called the “Every Student Succeeds Act.” It has some of what we would expect from this bureaucracy, like money for preschool (

Still, the law includes grants to states for blended learning and other digital or hybrid classroom ideas. Even charter schools receive some attention in the law, though since hybrid learning involves school and classroom activities and charter schools are local and state interests, federal laws for these activities should make us nervous.

Here’s what’s missing: Fairness. Under the new bill, the feds still do not give parents better choices for their children even if their current school is failing. High-income families can use their own money to pay for a private school or move to a new neighborhood, but it’s unfair that Obama delivered a law absent of more opportunities for low- and middle-income families.

In fact, in their press release, The White House celebrated that the bill does not allow students to move to a high-quality school if their assigned school is not meeting their needs (what the Obama administration calls “harmful portability provisions”). Washington should not be involved in education in the first place, yet the very least a federal law should do is provide help to those trapped in a broken system.

In fact, the new law shifts into hyperspace in the opposite direction from where states are going with education savings accounts. Five states now give parents the flexibility to customize their child’s education—three states enacted such laws just in the last year. State policymakers across the country are pursuing these ideas.

With a mess of potentially good and unarguably ineffective provisions, the law can only result in four more years of parents, teachers, and state lawmakers struggling with federal overreach, waste, fraud, and abuse.

Fortunately for families and taxpayers, Sen. Jeff Flake has taken up the light saber against ineffective and wasteful federal programs passed down after the retirement of Sen. Tom Coburn. For years, Coburn documented such programs, and with his retirement, Flake is continuing the efforts.

On Dec. 8, Flake’s office released “Wastebook: The Farce Awakens” and documented 100 examples of “egregious, outrageous, and unnecessary government spending totaling more than $100 billion.” Flake’s office reports the U.S. Department of Education has its share of waste, and then some, including $1.5 billion in “improper payments” of federal student aid for higher education.

This just adds to the entertaining list of ridiculous federal programs like $707,000 to create “fight clubs for shrimp,” $1.3 million to study how koozies work, and $1.2 million to study the effects of microgravity on sheep (conducted at Colorado State University, where the school mascot is a ram. True story.).

Families and their elected state officials cannot count on Washington to give every child a chance at success in education or in life. If the federal government won’t reduce its roll in education, then state lawmakers should give parents the ability to make decisions about where and how their children are educated. Then someday we won’t need Washington in the classroom.