Trump's Poor Approval Ratings Have Little To Do With Mueller Investigation

Jonah Goldberg
|
Posted: May 29, 2019 12:01 AM
Share   Tweet
The opinions expressed by columnists are their own and do not necessarily represent the views of Townhall.com. 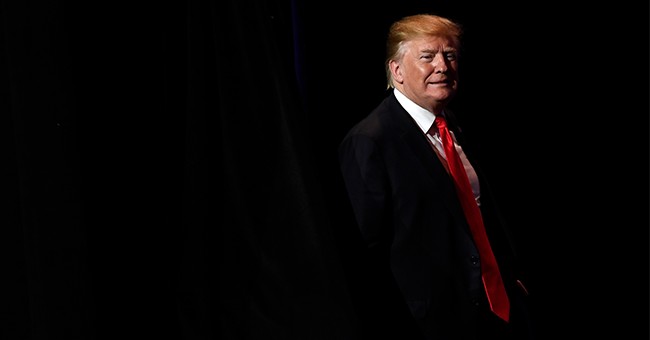 "Without the ILLEGAL Witch Hunt, my poll numbers, especially because of our historically 'great' economy, would be at 65%," President Trump tweeted last week.

In all likelihood, the president believes what he wrote. It's a strongly held sentiment among many of Trump's ardent supporters that if he hadn't been stabbed in the back by the Deep State, the investigation of special counsel Robert Mueller and a complicit media, people would have realized by now that Trump is, as the actor Jon Voight recently put it, "the greatest president since Abraham Lincoln." Or at least they would give him a fairer shake than he's gotten.

Is it true that the president's poll numbers have suffered largely because of what he calls a "witch hunt"?

The shortest and most accurate answer for this and all counterfactuals is, "We can never know." Still, there's ample reason to conclude the answer is, "Probably not."

There are two mutually reinforcing reasons for this conclusion, one structural, the other specific to Trump. The structural explanation is that the electorate has been growing more polarized for decades, and the presidency had become a symbol in the culture war long before Trump.

There have been only a handful of times in recent decades when any president has enjoyed a supermajority of public approval. During wartime, for example, the rally-around-the-president effect often swamps partisanship. George H.W. Bush hit 89 percent after the first Iraq war, and after 9/11, his son reached 90 percent.

Other events can also goose approval ratings. Bill Clinton's highest approval numbers were reported on the day he was impeached (a fact House Speaker Nancy Pelosi probably is thinking about as the House considers impeaching Trump). It's widely believed the bump in Clinton's polling was less a referendum on the president than on the effort to remove him. Barack Obama's best performance (67 percent) came four days after his inauguration, when many Americans were hopeful that his presidency could deliver on his campaign promise to put the culture wars behind us.

In all of these cases, however, the entropic effect of polarization reasserted itself as Americans divided back into Red and Blue teams. Obviously, events mattered. If, say, the second Iraq War had gone swimmingly, things might have been different, but there's little reason to believe the larger trend wouldn't have manifested itself again in time.

And then there's the specific case. Trump won in 2016 by picking the lock of the Electoral College while losing the popular vote by nearly 3 million votes. According to Gallup, he took office with an approval rating of 45 percent. His highest approval rating in Gallup's polling was achieved last month: 46 percent.

The notion that the public would have come around to Trump but for the Mueller probe presupposes that the investigation is what made him unpopular, when all of the evidence suggests that the investigation was merely something that people who already disliked the president put their hopes in. When Mueller's finding that there was "no collusion" was released, Trump's approval rating went down, not up. Also, the fact that Trump enjoys majority approval for his handling of the economy even as his overall disapproval ratings stay high demonstrates that voters don't look only to economic indicators when judging presidents.

There is, however, one way in which the Mueller probe may have hurt him: his reaction to it. When impeachment loomed for Clinton, however much he was privately obsessed with it, his public position was to ignore it and at least seem like he was focused on the people's business. Trump went a different way.

Normal presidents begin their terms by reaching across the aisle and attempting to at least appear as if they represent the whole country. They try to build on the coalition that elected them. Trump has never made any sustained effort in this regard. From his inaugural address onward, Trump has catered to his biggest fans and most ardent supporters.

This is a defining feature of Trump's character. The only people who matter are the ones who love him. And since his election, he's routinely mocked the idea that he should be "presidential," because his fans would find it "boring."

It's easy to imagine a world where the Mueller probe never happened. It's harder to imagine one where Trump isn't Trump, which is why 65 percent approval was never in the cards.