Jonah Goldberg
|
Posted: Apr 06, 2018 12:01 AM
Share   Tweet
The opinions expressed by columnists are their own and do not necessarily represent the views of Townhall.com. 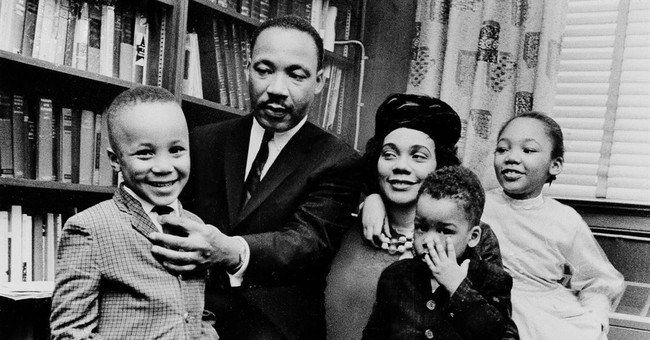 One of the best things about the passage of historical time is how the partisanship of a given moment melts away. If you've seen the musical "Hamilton" (or paid attention in civics class) you'd know that long before George Washington left office, the Founding Fathers were bitterly divided into rival partisan camps, now largely forgotten.

There are many reasons why time wears away the hard edges of partisanship. Nostalgia alone carries a significant chunk of the load. Also, while hindsight is never really 20/20 -- if it were, we'd never argue about the past -- the passage of time allows us to see how once-polarizing figures fit in grander narratives. This is what Edwin Stanton meant when he proclaimed upon Abraham Lincoln's death, "Now he belongs to the ages."

This week marked the 50h anniversary of the assassination of Martin Luther King Jr., and there is no modern figure who more richly deserves to be placed at the heart of the American story.

When King died in 1968, he was not the central figure in American politics he had been when he led the March on Washington in 1963. The victories he helped secure with the 1964 Civil Rights Act and the 1965 Voting Rights Act had sapped some of his political relevance, which is why he switched gears to issues of "economic justice." The rise of black nationalism and the headline-grabbing style of would-be revolutionaries such as Stokely Carmichael and Malcolm X had made King seem a bit of a relic.

As so often happens, it was King's tragically premature death that reminded so many of his historical stature. But even then, the riots and chaos of 1968 were not the ideal climate for sober appreciation of his contribution.

And, if you can forgive a bit of partisanship, the way some of his heirs -- literal (the King family) and figurative (Jesse Jackson, Al Sharpton et al.) -- tried to claim a monopoly on his legacy made that appreciation more difficult as well.

King's views on economics and American foreign policy were also too bound up in his persona for some conservatives to forget or forgive. More importantly, the generation of conservatives (though not necessarily Republicans, who disproportionately voted for the Civil Rights Act) who wrongly opposed the civil rights movement either out of misguided constitutionalism or simply out of archaic racism needed to die off before King's contribution could be better appreciated across party lines.

So what was King's contribution? Simply this: He forced America to fulfill its own best self.

It's popular today, particularly in certain corners of the left, to deride the hypocrisy of the Founding Fathers by pointing to the disconnect between the rhetoric of the founding and the reality on the ground. The Declaration of Independence states, "We hold these truths to be self-evident, that all men are created equal, that they are endowed by their Creator with certain unalienable Rights, that among these are Life, Liberty, and the Pursuit of Happiness." And yet America countenanced slavery, among other lesser but still abhorrent assaults on the ideal of equality.

But hypocrisy is only possible when it illuminates a violated ideal.

It was not until Lincoln delivered the Gettysburg Address that the ideal embedded in the Declaration fully became both the plot and theme of the American story. "Four score and seven years ago, our fathers brought forth, on this continent, a new nation, conceived in Liberty, and dedicated to the proposition that all men are created equal."

That idea, always present in America's self-conception, became the heart of the American creed. But it was not truly so until 100 years later, when King called upon Americans to live up to the best versions of themselves.

"When the architects of our republic wrote the magnificent words of the Constitution and the Declaration of Independence, they were signing a promissory note to which every American was to fall heir," King proclaimed in the figurative shadow of the Great Emancipator at the Lincoln Memorial. "This note was the promise that all men, yes, black men as well as white men, would be guaranteed the unalienable rights of life, liberty, and the pursuit of happiness."

King was not demonizing "white America," he was appealing to its conscience, asking his fellow Americans to live up to the ideals that they claimed defined our best selves. Rhetoric, literary critic Wayne Booth said, is "the art of probing what men believe they ought to believe."

King's rhetoric did exactly that, which is why he, like Lincoln, not only belongs to the ages now, he belongs to every American.