Stevens Makes At Least One Good Point in Controversial Essay

Jonah Goldberg
|
Posted: Mar 30, 2018 12:01 AM
Share   Tweet
The opinions expressed by columnists are their own and do not necessarily represent the views of Townhall.com. 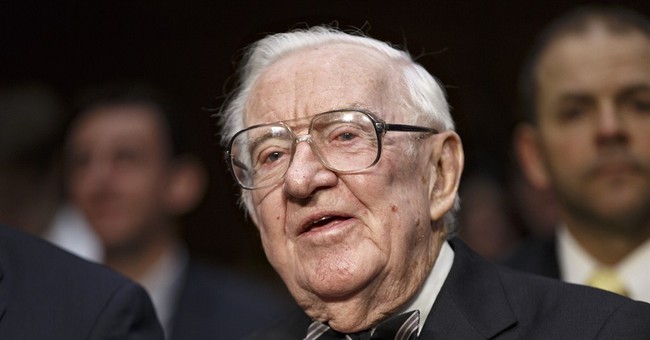 Two and a half cheers for Justice Stevens!

Let me say it up front: I don't think we should repeal the Second Amendment. But I applaud retired Supreme Court Justice John Paul Stevens for arguing that we should.

In case you missed it, Stevens penned an essay for The New York Times in which he argued that District of Columbia v. Heller -- the 2008 decision that recognized an individual right to bear arms -- was wrongly decided. (He was part of the four-justice dissent.) I disagree with Stevens about that, too. But I think he's right in saying it was at least a "debatable" finding.

None of that is relevant to my point, however. I applaud Stevens' essay for several reasons, but chiefly because it is honest. Gun-control proponents often say they favor "reasonable" or "commonsense" measures. And sometimes that's true. But gun-rights proponents have a reasonable and commonsense suspicion that the real goal is to do away with most or all gun rights.

That suspicion is bolstered when every now and then the mask slips. President Obama said he thought Australia's gun "buyback" system was worth exploring. The buybacks were mandatory. In other words, guns were confiscated by the state, but people were "compensated" for the seizure.

A few years ago, The New York Times ran its first front page editorial in nearly a century, arguing not for reasonable and commonsense gun reforms, but that large categories of weapons should be "outlawed for civilian ownership" and confiscated from those who already own them. The Times praised the gun-control policies of Europe, which are, fair to say, not compatible with most readings of the Second Amendment.

Stevens's argument cuts through all of the fictions and double-talk and says plainly what millions of Americans and lots of politicians and journalists truly believe: Law-abiding citizens shouldn't be able to buy guns easily, or at all, if it makes it easier or even possible for non-law-abiding citizens to get their hands on them.

But there's another reason why I applaud Stevens's position. He seeks to change the meaning of the Constitution the way the founders intended: through the amendment process.

For more than a century, progressives have argued that the Constitution should be seen as a "living and breathing document," in the words of Al Gore and countless others. What they usually mean is that judges and justices should be free to find new rights that progressives like in its text, from the right to privacy to the unfettered right to abortion. One needn't be absolutist about this. I do think we have a right to privacy, because I think you can find that right implicit in the First, Second and Fourth Amendments, among other places.

What is ridiculous and despotic is when courts radically reinterpret the text to conform to contemporary norms or fads. Often, when I rail against the living Constitution, someone will say to me, "If the Constitution didn't change, we would still have slavery," or, "Women wouldn't be allowed to vote." That's true. But those changes weren't the product of a living, breathing Constitution. They were the result of constitutional amendments, which are as valid and binding as the original text.

The death penalty is clearly recognized in the text of the Constitution -- the Fifth Amendment says no person shall be "deprived of life, liberty, or property, without due process of law." I totally understand why people don't like that fact. But it's a fact nonetheless, and if you want to make the death penalty unconstitutional, you have to change the Constitution. That's not what the Supreme Court did in 1972, when it essentially banned capital punishment (until the 1976 decision Gregg v Georgia).

The same holds true for the right to bear arms.

Now, I should say that trying to repeal the Second Amendment would be politically disastrous for Democrats, at least in the short run, for the simple reason that gun rights are popular, particularly in red states. But that's been true of other issues.

Changing the Constitution is supposed to be hard. The process gives the changes legitimacy and forces advocates to hone their arguments and persuade their fellow citizens. Difficulty is a feature, not a bug.

Of course it would be easier to just convince five unelected and unaccountable justices on the Supreme Court to negate the text and do what you want. But that's not the system we have, nor the system anyone should want.