Jonah Goldberg
|
Posted: Mar 03, 2017 12:01 AM
Share   Tweet
The opinions expressed by columnists are their own and do not necessarily represent the views of Townhall.com. 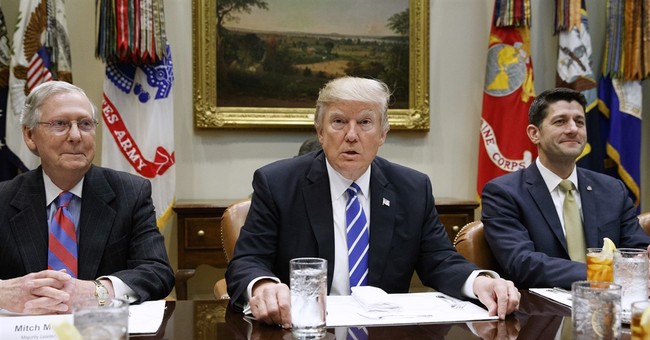 Low expectations are a hell of a drug.

Donald Trump gave a good speech the other night before a joint session of Congress. It was not, as some commentators have suggested, one of the greatest speeches ever delivered in the halls of the Capitol. One test: Can you remember a single line just a few days later? Can you identify any passages that you honestly believe will be remembered a decade from now?

I don't mean this as criticism of Trump. It was by far the best speech of his presidency and, probably, his political career. Not only was it disciplined -- a quality in rare supply in the president's public speaking -- but it was hopeful, inclusive and, as far as political speeches go, unselfish. Had he adopted this tone the day he was sworn in, he would have avoided quite a few problems.

The response to the speech was far more significant than the speech itself, and it tells you a lot about politics and ideology in the age of Trump.

The left's reaction was predictable: dismiss the positive and demagogue the rest. The same people who praised Hillary Clinton's use of Khizr Khan, the father of a fallen American soldier, as a campaign surrogate were horrified by Trump's supposed exploitation of the wife of a Navy SEAL who died in combat.

The response from the right is more intriguing.

The vast majority of conservatives and Republicans, particularly party activists, are psychologically or politically invested in Trump's success. For his most rabid fans, he can still do no wrong, and they heard in his address whatever they wanted to hear.

For those Republicans who are not sold on Trump the man and are nervous about all of the distractions and unforced political errors of his first weeks in office, the address was a massive relief. Finally, one heard from nearly all quarters of the skeptical-but-hopeful right, he's getting his act together.

It's a bit like when a loved one has a drinking problem or some other pathology. When they get their act together, even for a day or two, parents and siblings take heart and say, "This is the first day of the rest of his life." Or, "Now things are going to be different."

It's an understandable response.

But both the head-in-the-sand denial of the left and the "we're cooking with gas now!" cheerleading from the right encourage people to ignore the substance.

In short, this was not a particularly conservative speech. To be sure, there was much for conservatives -- including yours truly -- to applaud. But outside of the protectionism and a few points about immigration, the substance could have been delivered by any moderate Republican or moderate Democrat (if one could be found).

Yes, Trump talked about cutting taxes and paring back regulation. If you go back and read State of the Union addresses by Barack Obama and Bill Clinton, you'll find numerous examples of them making similar appeals. One can debate their sincerity, but the point is that all presidents talk this kind of talk (how much they walk it is another matter).

This, too, is not fundamentally a criticism of the president. Candidate Trump promised not to touch existing entitlements and to create a new one for child care. He promised protectionism. He vowed to spend $1 trillion on infrastructure. He rarely pushed social conservatism on the campaign trail, and he didn't talk about it at all on Tuesday night. Fair enough.

Again, what is remarkable is not what he said, but what people heard. Consider the Tea Party Express, the biggest of the tea party PACs.

"Since 2012, Tea Party Express has hosted the official Tea Party response to the President's address," the group said in a statement. "Last night was the first night that our address wasn't necessary. Not because the ideas of limited government and economic growth have fallen out of vogue -- because they surely haven't -- but because that speech was delivered on the floor of the U.S. House of Representatives by the President of the United States."

Maybe I'm crazy, but I'd bet that if President Obama (or a President Jeb Bush) had made a similar speech with similar spending commitments and no explanation of how to pay for them, the Tea Party Express would have mustered enough objections to respond.