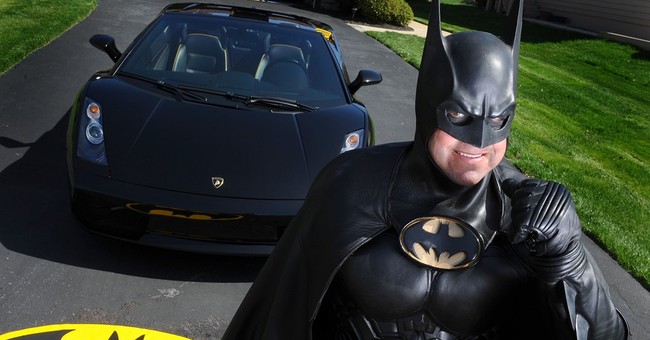 Ridiculous stories about political correctness float around the Internet like so much ocean garbage. Occasionally, one washes up on "Good Morning America" with a larger story to tell.

A little girl named Laura was sent home with a note because she had brought a Wonder Woman lunchbox to school. (The website The Mary Sue first reported the story, from a post on the social media site Imgur.) In the letter addressed to Laura's parents, the school explained:

"The dress code we have established requests that the children not bring violent images into the building in any fashion -- on their clothing (including shoes and socks), backpacks and lunchboxes. We have defined 'violent characters' as those who solve problems using violence. Superheroes certainly fall into that category."

That's true. You know who else falls into that category? George Washington and all the Founding Fathers. It also includes Abraham Lincoln, Franklin Roosevelt, John F. Kennedy and every other U.S. president, including Barack Obama. (He solved the problem of Osama bin Laden with SEAL Team 6.) One needn't get too provocative, but the Hebrew and Muslim prophets and even Jesus saw violence as a solution to at least some problems. (Just ask the money-changers in the temple.)

I have no idea if the school in question has a security guard or police officer on the premises, but I am sure that the parents would very much like someone equipped to solve some violent problems with violence should the need arise.

That's because violence is a tool. It's not a good tool -- in the moral sense -- nor is it a bad tool. Surgery to save a life is laudable. Surgery to inflict pain is torture. A hammer can smash in someone's skull, or it can build a house. To say that all kinds of violence are equally bad isn't high-minded morality; it is amoral nihilism wrapped in a kind of gauzy, brain dead sanctimony.

Barely two weeks ago, three American passengers -- two of them servicemen -- heard gunfire on their train from Amsterdam to Paris. When everyone else was running from the would-be mass murderer, they ran toward danger. They didn't ask the alleged terrorist, a Moroccan named Ayoub El-Khazzani, what his grievances were or try to debate the finer points of Islamic law. They used force to subdue him. They don't have Wonder Woman's powers, which makes them more, not less, heroic.

A little over a month earlier on a train in Washington, D.C., on the Fourth of July -- the day we Americans celebrate our collective decision to use violence to solve the problem of British tyranny -- 24-year-old Kevin Joseph Sutherland was brutally slaughtered. The killer punched, kicked, stomped and ultimately stabbed Sutherland 30 to 40 times. Almost a dozen passengers watched the 125-pound assailant while doing absolutely nothing.

One needn't second-guess their decision too harshly to at least concede the obvious fact that the onlookers were in no way heroes.

If you know anything about superheroes, the underlying morality is pretty much everything. Supervillains use their powers for evil ends. Superheroes use theirs to protect the vulnerable and uphold the good. Teaching kids that there's no difference between the two is the very opposite of moral education.

A country, and a civilization, that actively chooses to render such distinctions meaningless has lost the confidence to sustain itself.

There's an added irony here. Around the time little Laura's school was cracking down on Wonder Woman lunchboxes, two women, Kristen Griest and Shaye Haver, passed the Army Ranger training course for the first time. The news was hailed across the country as a huge step forward for women.

Are these women role models or not? Are they heroes? Or should they be condemned for their willingness to use violence when necessary? Maybe Laura should get a Griest and Haver lunchbox and find out.