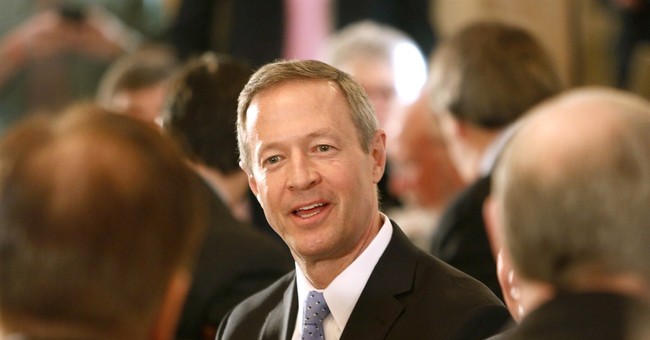 Former Maryland Gov. Martin O'Malley is thinking about running for president on the Democratic ticket by appealing to Massachusetts Sen. Elizabeth Warren's populist fans. Warren is a very bright former Harvard law professor. So it is interesting that O'Malley thinks the best way to reach out to her fans is to say remarkably stupid things.

Inskeep: "[Rubio] argues that an active government actually keeps people frozen at their economic status because if you are well off, if you can afford a lawyer, if you can deal with regulations, you can maneuver through government and stay prosperous. And if you are not so well off, it's harder to work the system. Is there some truth to that? You were a big-city mayor; you know how government works."

O'Malley replied: "No, I don't think there's any truth to that."

He did unload some talking points about how the tax code is "Swiss cheese" because of deregulation and Wall Street lobbyists. But as for the idea that regulations can hold poor people down or keep the middle class from advancing, he said that's plain wrong, adding a familiar bovine-scatological colloquialism for emphasis.

The original Know-Nothing Party was a bigoted political movement that sought to use regulations to bar Catholics, Irish, Jews and other immigrant groups from economic and social advancement. The movement died out in the 1850s, but the approach in various forms lived on.

The first minimum wage laws were advocated by progressive economists on the assumption that if you forced employers to pay a "white man's wage," they'd only hire white men. As the sociologist E.A. Ross put it in the context of Chinese immigrant workers, in the early 1900s, "the Coolie cannot outdo the American, but he can underlive him."

The Davis-Bacon Act, still cherished by Democrats and their labor union patrons, was passed in 1931 to prevent blacks and immigrants from competing with all-white unions for federal contracts during the Depression. And Jim Crow laws certainly locked millions of blacks out of the middle class.

Explicit racist justifications for regulations have disappeared, but the racial consequences of many regulations tragically endure.

Hair braiding is probably one of the most famous examples of the scandalous abuse of occupational licensing in this country. Hair braiding is a thriving business in the African-American community. It's also the kind of career that's easy for someone without a lot of formal education to break into. And yet, in state after state, politicians dig regulatory moats that keep African-American and other entrepreneurs out of the middle class.

Melony Armstrong, of Tupelo, Mississippi, told Congress last year that she had to complete 300 hours of course work to open her salon, "none of which covered hair braiding." Armstrong wanted to teach others how to braid, too. That required an additional 3,200 hours (that is well more than a year of full-time work). By the way, according to the Institute for Justice, O'Malley's Maryland has been one of the worst offenders when it came to such burdensome licensing rules.

O'Malley is also a passionate supporter of hiking the minimum wage to $15 an hour, which would be a boon to many union members and others who managed to keep their jobs. But it would also impose a significant burden for many small businesses that can't pass the costs on to consumers (and a gift to big business that can). Worse, it would make it that much harder for unskilled workers to get their first job, which is largely the point of the minimum wage.

O'Malley is a cheerleader for Dodd-Frank and other Wall Street regulations. Whatever their merits, such laws put huge compliance costs on small banks, which are dying out. These small-enough-to-fail banks are where people like Armstrong go for loans.

In countless other ways, government at all levels rewards those who made it and creates problems for those who want to. No doubt O'Malley is serious about his concern for the little guy, but if he wants to be taken seriously, he should probably stop talking.