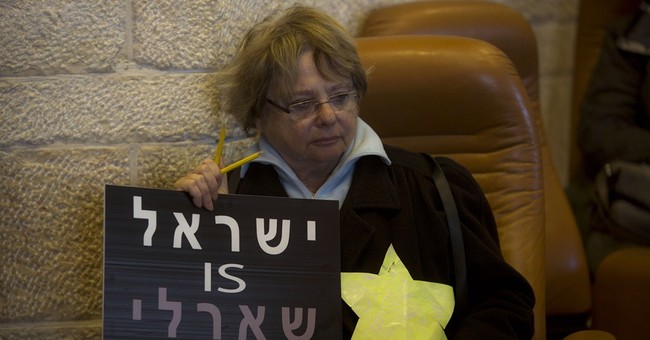 In the wake of the terrorist attack on a kosher market in Paris, Israeli Prime Minister Benjamin Netanyahu asked French Jews to come home.

I don't particularly like that advice. I think it would be a tragedy if centuries of Jewish French culture had to die out because Jews were chased out by Islamist thugs. The French government agrees -- for now at least -- and has posted armed soldiers everywhere Jews live and gather.

But no matter how you slice it, Jews are at a numerical disadvantage.

People understand that in a democracy there will always be strength in numbers. The politician who gets the most votes wins, the constituency with the most voters gets heard the most, etc. This also tends to be true of intellectuals, activists and businesses. If China didn't have more than 1 billion people, Hollywood wouldn't kowtow to Chinese sensibilities. And if Duke University didn't have a growing number of Muslim students, no one would have thought to broadcast calls to prayers from its chapel bell tower.

And if there were a billion Jews in the Middle East, HarperCollins would never have edited out Israel from its atlas. The publisher was recently embarrassed by the revelation (first reported by the British Catholic magazine The Tablet) that it had been selling an atlas "developed specifically for schools in the Middle East," promising "in-depth coverage of the region and its issues" that nonetheless left Israel on the cutting room floor. A spokesman for the subsidiary that put out the map told The Tablet that including Israel would be "unacceptable" to their customers in the Persian Gulf and elsewhere. And the customer is always right.

A similar attitude pervades the leaders of the so-called international community. Tiny Israel manages to chafe the sensitive pinstriped derrieres of the State Department and foreign ministries around the globe. According to "realists," Israel is a problem because the majority of nations -- and many Muslims in the West -- don't like it. It was this sort of thinking that prompted French President Francois Hollande initially to ask Netanyahu not to attend the unity march in Paris against terrorism. It's also probably why Hollande ostentatiously walked out on Netanyahu's remarks at the Grand Synagogue.

Realism itself is not anti-Semitic. But it's often hard to tell where realism ends and anti-Semitism begins, as when a French diplomat in 2001 famously used a common epithet to describe that "sh***y little country Israel" and blame it for all the troubles in the world. He added, "Why should the world be in danger of World War III because of those people?" Many had similar attitudes about Czechs and Poles before World War II.

Since 2006, the U.N. Human Rights Council has condemned Israel 50 times. It has denounced human rights violators such as Iran, Saudi Arabia and China zero times.

Nearly every conversation about the Charlie Hebdo cartoons makes reference to the fact that there are 1.6 billion Muslims worldwide, as if there's an obvious correlation between the number offended and the nature of the offense. This is less about manners and more about power worship. A musical mocking Mormons (15 million worldwide) has been a smash hit on Broadway for years. Yet according to many of the same people who leap to defend Muslim sensibilities on cable TV, defending Mormon sensibilities marks you as a rube.

In much of the Muslim world, newspapers frequently run vile anti-Semitic cartoons depicting, for instance, Jews dressed as Nazis eating babies. Perhaps if Jews outnumbered Muslims by roughly 115 to 1 rather than the other way around, we'd hear more about those blasphemous drawings.

Anyone who cherishes democracy understands that numbers matter. But the key word in "liberal democracy" is "liberal," not "democracy." A mob can be of one mind on an issue, but that doesn't make it right. And giving into the mob simply because it is large and dangerous may be realistic, but a better word for it is "appeasement."