Using Allegations of Rape in a Grab for Power 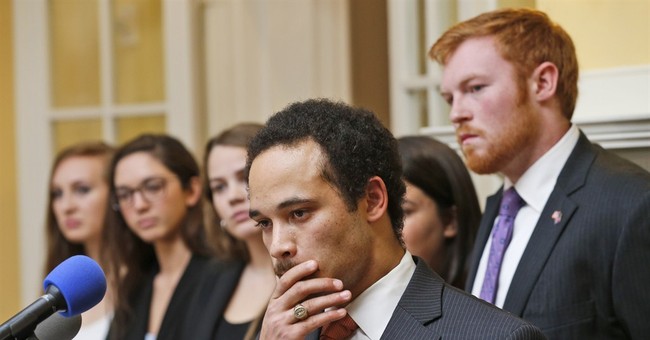 Trending
Nine males were accused of being part of a heinous rape. The alleged injustice fomented a mob mentality. An enraged community wanted to skip any talk of a serious investigation, never mind a trial, and go straight to the punishment.

I'm not talking about the now-discredited allegations against fraternity members at the University of Virginia, but of the legendary case of the Scottsboro Boys, nine African-American teenagers falsely accused of rape in Alabama in 1931. Despite testimony from one of the women that she had made up the whole thing, the Scottsboro Boys were convicted in trial after trial. All served time either in jail or prison.

Scottsboro is a landmark case in the history of the civil rights movement and the American justice system. Sadly, it was hardly an outlier. There's a long, tragic history of African-American men being wrongly accused and convicted of rape. The most notorious recent example is the 1989 case of the Central Park Five in which four African-American teens and one Latino were wrongly accused and convicted of brutally raping a white woman in New York.

Clearly, the injustices involved in these cases are far greater than what transpired at UVA. No one at the Phi Kappa Psi fraternity faced the death penalty or went to jail. But the lessons learned and principles involved are timeless and universal; everyone deserves the presumption of innocence.

Apparently, Zerlina Maxwell disagrees. She writes in the Washington Post: "We should believe, as a matter of default, what an accuser says. Ultimately, the costs of wrongly disbelieving a survivor far outweigh the costs of calling someone a rapist."
CARTOONS | Al Goodwyn
View Cartoon

Let's cut to the chase. Maybe I live in a cocoon of some kind, but it seems to me that as terrible and unjust as it surely can be, the stigma of having been raped is hardly as deleterious to one's reputation as the stigma of being accused of being a rapist. I don't think I know anyone who would discriminate against a rape victim. I'd like to think I don't know anyone who wouldn't discriminate against a rapist.

Back to Zerlina Maxwell. She is a lawyer openly advocating the defenestration of the bedrock of American law: the presumption of innocence. More amazing and sad, she's not alone.

In the wake of revelations that Rolling Stone reported as fact an unsubstantiated story of institutionalized gang rape, many feminist activists have dug in, saying, in effect, the truth shouldn't matter, or at least it shouldn't matter very much -- not when there's a "rape epidemic" engulfing college campuses. I put the term in quotation marks because I believe this alleged epidemic is largely a deliberate political fabrication.

Obviously, rapes happen. But this "epidemic" would have to coincide with a decades-long decline in forcible rapes and a decades-long increase in public intolerance for sexual assault and harassment. Moreover, the primary evidence activists cite is a bogus statistic, based upon a Web survey of two universities.

So what's going on here? Beyond the hysteria and legitimate concern, this is a power grab. It's no coincidence that the Rolling Stone article spent a great deal of time advocating for the expansion of federal involvement in higher education via Title IX of the Civil Rights Act.

As chronicled by Jessica Gavora (my wife) in her book "Tilting the Playing Field," feminist activists, with the aid of sympathetic journalists and allies in the judiciary and the federal bureaucracy, have used Title IX as a "far-reaching remedial tool," in the words of the New York Times, to reorganize higher education to their ideological agenda.

They started with women's sports, but the model remains the same: Interest groups foment outrage, then enlist sympathetic activist journalists who rely on the testimony of deeply invested "experts" while partisan politicians exploit the allegedly systemic problem to advance an ideological agenda and demonize opponents as sexist bigots or rape apologists.

The UVA story was the perfect -- too perfect it turns out -- outrage at the exact moment the Obama administration was pushing new Title IX regulations that would erode the presumption of innocence in rape cases on campus. There's no reason to expect this fiasco will even slow that effort. So cheer up, Ms. Maxwell. You're winning.