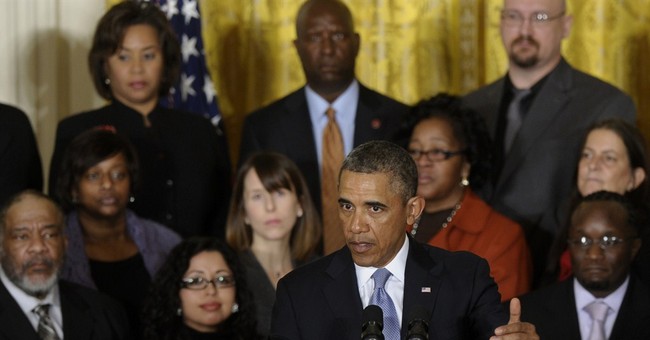 Democrats are revving up for a huge national "conversation" on income inequality. This is in no small part because the Obama administration and congressional Democrats would rather talk about anything other than Obamacare.

But it would be unfair to say this is all a cynical effort to gain partisan advantage. For instance, New York City Mayor Bill de Blasio is certainly sincere in his desire to take "dead aim at the Tale of Two Cities" in the Big Apple. He and his team want to fix the distribution of income in New York by distributing it differently.

This in itself points to the different perspectives on the left and right when it comes to income inequality, perspectives worth keeping in mind if you're going to try to follow the conversation to come.

As a broad generalization, liberals see income as a public good that is distributed, like crayons in a kindergarten class. If so-and-so didn't get his or her fair share of income, it's because someone or something -- government, the system -- didn't distribute income properly. To the extent conservatives see income inequality as a problem, it is as an indication of more concrete problems. If the poor and middle class are falling behind the wealthy, it might be a sign of declining or stagnating wages or lackluster job creation. In other words, liberals tend to see income inequality as the disease, and conservatives tend to see it as a symptom.

Also, income inequality can be a benign symptom. For instance, if everyone is getting richer, who cares if the rich are getting richer faster? New York City's inequality, for instance, is partly a function of the fact that it is so attractive to poor immigrants who start at the bottom of the ladder but with the ambition to climb it rapidly.

This raises the most delicate aspect of income inequality, the extent to which it can be driven by non-economic issues. New York City's new public advocate, Letitia James, delivered her inaugural address while holding hands with Dasani Coates, a 12-year-old girl who until recently lived in a grimy homeless shelter with her parents. She was profiled in a nearly 30,000-word New York Times series that aimed to highlight the Dickensian nature of the city and succeeded in anointing Dasani as the living symbol of income inequality in New York.

James held Dasani's hand aloft for emphasis when she proclaimed, "If working people aren't getting their fair share ... you better believe Dasani and I will stand up -- that all of us will stand up -- and call out anyone and anything that stands in the way of our progress!"

But she also said something interesting about herself. James said her parents were smiling down from heaven as they watched her swearing-in, adding that her mother and father were "without credentials, humbled individuals more accustomed to backbreaking work than dinner parties." Later, at a reception, she said of her parents, "I made them proud. I just want to inspire others. That's why I had Dasani with me."

One has to wonder whether James missed the irony. According to liberals like James and The Times (to the extent that's a distinction with a difference), Dasani is a victim of a system that tolerates so much economic inequality.

Dasani is certainly a victim, but is the system really to blame? Dasani's biological father is utterly absent. Her mother, Chanel, a drug addict and daughter of a drug addict, has a long criminal record and has children from three men. It doesn't appear that she has ever had a job, and often ignores her parental chores because she's strung out on methadone. As Kay Hymowitz notes in a brilliant (New York) City Journal examination of Dasani's story, The Times can't distinguish between the plight of hard-working New Yorkers like James' late parents and people like Dasani's parents. "The reason for this confusion is clear: In the progressive mind, there is only one kind of poverty. It is always an impersonal force wrought by capitalism, with no way out that doesn't involve massive government help."

The data say something else. Family structure and the values that go into successful child rearing have a stronger correlation with economic mobility than income inequality. America's system is hardly flawless. But if Dasani were born to the same parents in a socialist country, she'd still be a victim -- of bad parents.