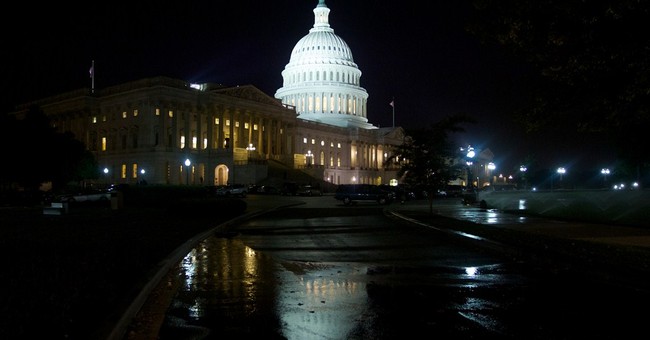 That diagnosis largely hangs on the judgment of 1970s New Right direct-mail impresario Richard Viguerie, whose ears have been ringing with the thunder of Fort Sumter for a quarter-century.

Within a week of Ronald Reagan's 1981 inauguration, Viguerie was denouncing the Gipper as a traitor to the cause. The Associated Press ran a story headlined "Conservatives Angry With Reagan." Viguerie was the centerpiece: "Almost every conservative I have talked to in the last two months has been disappointed in the initial appointments to the Reagan Cabinet."

By July of that year, the Washington Post ran a news story, "For Reagan and the New Right, the Honeymoon Is Over," which included many anti-Reagan barbs. After the 1990 midterms, Viguerie told USA Today, "You just heard the opening shots of a civil war within the Republican Party."

Then again, just because Viguerie is predicting something doesn't mean he's wrong. I've always loved the story of the British intelligence officer whose career spanned the first half of the 20th century: "Year after year the worriers and fretters would come to me with awful predictions of the outbreak of war. I denied it each time. I was only wrong twice."

In 1984, Viguerie wrote a book, "The Establishment vs. the People," that could probably be republished today with only a few edits. Viguerie touted "conservative populism," while the vogue today is "libertarian populism." Ideologically, the key difference is that conservative populists believed the left was the true enemy, while libertarian populism takes dead aim at big government, whether run by Democrats or Republicans.

But the more important distinctions aren't philosophical. Whereas the old game of attacking even very conservative Republicans as sellouts was something of a direct-mail fundraising racket, the new cause is more like a real movement.

And that's why this time the infighting might lead to real war. For starters, the populists are much better funded and organized. Despite liberal doomsaying that Citizens United would give corporations a stranglehold over politics, we've seen the influence of big business decline in the GOP as new populist PACs have declared war on what they believe is the K Street wing of the party.

Also, public sentiment is much more on their side than you might guess from media coverage of the Tea Party. As political scientist Larry Bartels recently observed, the public is "more conservative than at any time since 1952." That new progressive era liberals promised in 2008? It never happened. The public has grown more conservative during the Obama presidency. The catch: It's grown less Republican too.

In "The Roots of Modern Conservatism," historian Michael Bowen argues that the familiar creation story of the modern right that focuses on Barry Goldwater's failed 1964 presidential bid skips the all-important chapters of the 1940s and 1950s. This was when the original "Me Too" Republican, Thomas Dewey, battled the legendary "Mr. Republican," Robert Taft. ("Me Too" GOPers claimed they liked the New Deal, it was just run poorly.)

According to Bowen, the fight between Dewey and Taft had less to do with ideology and more with internal GOP politics. Desperate to gain control of the party, the two factions invoked -- and often invented -- ideological differences to justify their claims and grievances. Eventually, the ideological arguments became self-justifying, in the same way the Sunni-Shiite Muslim split started as a fight over the prophet Muhammad's successor and was only retroactively imbued with profound theological significance.

A similar dynamic is at work on the right today. Six months ago, most Tea Party leaders were eager to get rid of the medical device tax under Obamacare. But, in the recent budget battle, getting rid of it was suddenly an ideological betrayal and a sop to big business.

A culture war is definitely raging on the right, and a civil war may follow, though I hope not. I'd hate to see the GOP establishment create an ideological rationale for being anti-Tea Party. It's better for conservatism if the GOP establishment is pulled toward the Tea Party, rather than repelled from it. Likewise, it's better if the Tea Party sees the GOP as a vehicle for its agenda rather than an obstruction.

If forced, I'd root for the tea partiers. And once they're in power, I'd chuckle as the Richard Vigueries denounced them as sellouts too.