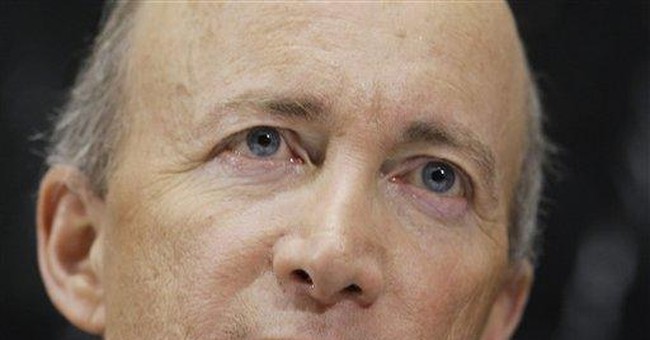 Donald Trump, who believes not only that he would make the best president but that he could win, declined to run because making money is his true "passion." It's as if Cincinnatus loved his plow too much.

Former Arkansas Gov. Mike Huckabee also bowed out, with class and dignity even his friend Trump could not buy.

Ron Paul, the libertarian Harold Stassen, is in for another go, presumably on the mistaken assumption that America has turned into Tea Party Nation. (If only!)

And then there's Newt Gingrich.

On NBC's "Meet the Press," the former House speaker -- a man who has spent much of the last decade declaring the need for radical transformation of this, that and the other thing -- denounced Paul Ryan's Medicare proposals as too "radical" and nothing less than "right-wing social engineering." He also came out in favor of an individual mandate for health insurance.

This last bit of news was no doubt greeted with jubilation in the Mitt Romney camp, given that Romney had only days earlier given a speech defending his own landmark achievement -- a state-based individual mandate that helped inspire "Obamacare." By my count, Romney's speech bombed with 9 out of 10 conservatives (the 10th being influential conservative talk-show host Hugh Hewitt).

To have Gingrich out there defending the mandate -- and by extension Romney -- had to have the former Massachusetts governor jumping for joy so high his hair might actually have moved.

By midday Monday, however, Gingrich was reversing himself in response to a deluge of criticism. But the damage was done. The simple fact is that despite Gingrich's immense talents and achievements, Ryan -- who's not even in the race -- is more popular than Gingrich among conservatives. It's hard to throw someone under the bus when it's not your bus. More to the point, Gingrich reinforced the impression that his mouth deserves a patent as a perpetual motion machine.

Still, the real significance of the last week or so is not the breaking up of the political logjam of candidates but of the policy logjam.

Not only did Romney and Gingrich blur the lines between the GOP and Barack Obama, they also sharpened the distinctions between themselves and the rest of the GOP field.

Daniels, however, also steadfastly refuses to sign anti-tax activist Grover Norquist's pledge to never raise taxes. He famously called for a "truce" on social issues, which social conservatives translate as "surrender" to the left since they rightly believe that the left is the aggressor in the culture war. And last week he playfully suggested he might tap former Secretary of State Condoleezza Rice as his running mate. Floating a pro-choice veep is not the way to reassure social conservatives.

For those paying attention, these should be fascinating developments given the perennial claims that the GOP base is too right wing, extremist and closed-minded to tolerate such philosophical diversity. (And with the exception of Gingrich and Paul, there are no Southerner candidates in a party allegedly captured by the South.)

Does all this mean that the GOP has re-embraced its Nelson Rockefeller roots? Of course not.

But it does hint that this year's primary season won't involve a replay of the dreadful 2008 debates in which the candidates auditioned to play the part of Ronald Reagan in the school play.

It also suggests that the front-runners -- a group that includes former Minnesota Gov. Tim Pawlenty -- might be ahead of the rank and file of the GOP.

Come November, it is very unlikely that conservative voters will stay home. So, barring a truly fringe GOP nominee, they will vote against Obama no matter what. Already, the conversation on the right is moving toward the all-important question of "electability" -- i.e., which candidate can peel off the handful of moderates and independents needed to win in an election that will be a referendum on Obama and his record.