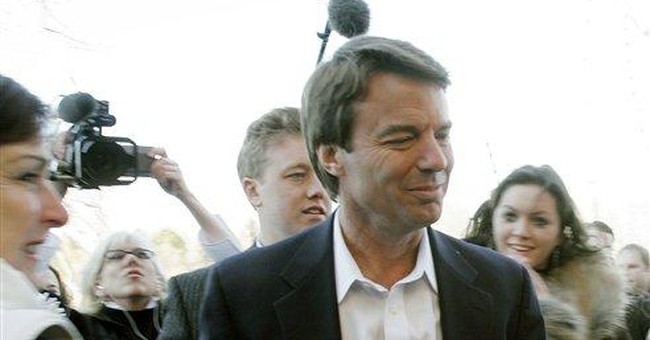 John Edwards, when he wasn't fixing his hair or cheating on his wife, liked to talk about "two Americas." In one America, things were pretty bad, somewhere between "The Grapes of Wrath" and Thunderdome. In the other America, where Edwards himself lived in a McMansion, things were going swimmingly.

Edwards was hardly the only one to use this two-Americas formulation. It's been a popular talking point for years. Socialist intellectual Michael Harrington helped to inspire the Great Society with his book, "The Other America."

As serious analysis, this bifocal vision of America has always left me cold. The American economy is too dynamic, the American people too optimistic, to talk so glibly about haves and have-nots as permanent classes, the way French aristocrats talked about the peasants. More than half the people in the poorest 20 percent pull themselves out of it within a decade. Moreover, it's all based on a kind of class envy that has never flourished in the U.S. the way it has elsewhere.

Democrats insist that health care is a "right." It's that conviction more than anything else that is driving their push for ObamaCare.

The notion that health care is a right is an old one, with deep roots in socialist and progressive thought. It achieved its highest expression in FDR's 1944 address to Congress. The president insisted that the old Bill of Rights had run its course, and the new industrial age required new rights. These rights included a guaranteed good job, a good home and, naturally, good medical care.

Roosevelt said that opposition to this sweeping transformation of America made you a fascist. If "history were to repeat itself and we were to return to the so-called 'normalcy' of the 1920's, then it is certain that even though we shall have conquered our enemies on the battlefields abroad, we shall have yielded to the spirit of Fascism here at home."

Keep in mind that the 1920s was a decade of roaring economic growth. The return to "normalcy" FDR referred to was the return to a more limited form of government (not counting Prohibition). The Republicans released Woodrow Wilson's political prisoners. They shuttered the Democrats' propaganda ministry (the Committee for Public Information). They called off the censorship and the "war socialism" of the Wilson years. And they helped usher in roaring economic growth.

President Calvin "Silent Cal" Coolidge, the poster boy for the '20s, was once asked what he thought of his achievements in office. He replied: "Perhaps one of the most important accomplishments of my administration has been minding my own business."

That was the return to normalcy FDR was talking about. A government minding its own business, according to FDR, amounted to the spirit of fascism.

It's not hard to see why so many liberals today take one look at the vast gatherings of decent, middle-class Americans known as tea parties and instantly think "fascists!" Never mind that fascists, properly understood, don't usually demand less government intervention.

What we have here is a fundamental conflict of visions, to borrow a phrase from Thomas Sowell. One side believes that people are born into their station in life and it is the government's job to make their miserable lives a little better. Indeed, it is the natural order of things for the government to provide jobs, health care, homes to the people. If you object to this concept of government, it must be because you want to "punish" the downtrodden and discriminated. You must be animated by racism, sexism, greed, "fascism!"

The other side says that our rights come from God, not from government. That while the government has an obligation to promote the general welfare, it doesn't have a holy writ to design the nation as it sees fit. The Constitution is not a coupon insert in your local paper, brimming with all sorts of giveaways and two-for-one deals. The Constitution and the Bill of Rights delineate what the government cannot do, not what it can. What was so fantastic and revolutionary about that is that for the first time in history, a nation was founded on the proposition that the government should mind its own business. Believing that doesn't make you a fascist, it makes you a patriot.

But the leaders of one America don't see it that way, and probably never will. Which is why, whatever happens in Congress in the coming days and weeks, it will be "two Americas" for a very long time.