Credit Where Credit Isn't Due 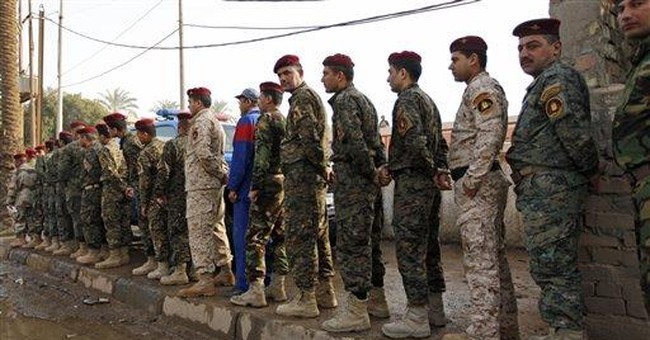 "Victory has a thousand fathers," John F. Kennedy reportedly said, "but defeat is an orphan."

By that standard, George W. Bush has won the Iraq war.

Last month, Vice President Joe Biden proclaimed on CNN's "Larry King Live" that the peaceful transition to democracy and the (partial) withdrawal of U.S. forces "could be one of the great achievements of this administration."

Initially, I ignored Biden's comment because, well, he's Joe Biden. As critical as I may be of the Obama administration, holding it accountable for Biden's mouth seems grotesquely unfair.

But then White House spokesman Robert Gibbs defended the vice president, suggesting that it was Obama who put Iraq "back together" and worked out bringing American troops home. More on that in a moment.

Then, just this week, Newsweek, which spent years ridiculing Bush, came out with a cover story titled "Victory at Last: The Emergence of a Democratic Iraq," in which the authors grudgingly and tentatively credit Bush with creating a democratic Iraq.

No word yet on whether Michael Moore will publicly cut off some fingers, like a failed Yakuza henchman, to atone for his misdeeds.

The Newsweek story might indeed be premature, as recent upticks in Iraq violence demonstrate that nobody's out of the woods yet. From what I can tell, there may be a rough summer ahead if a new government can't be formed quickly. There almost certainly will be more bombings during this weekend's elections and beyond.

Still, when the Obama administration starts taking credit for success in Iraq, you know things have changed for the better. Now, of course, it is a grotesque distortion of logic and even political decency for the White House to be taking credit for victory in Iraq.

Obama wouldn't be president today if he hadn't opposed the war. His opposition is what best distinguished him from Hillary Clinton in the primaries. Obama also opposed Bush's surge, which turned Iraq around. He and Biden both claimed that it would actually make things worse. "I am not persuaded that 20,000 additional troops in Iraq is going to solve the sectarian violence," then-Sen. Obama declared in January 2007. "In fact, I think it will do the reverse."

When Gibbs went to bat for Biden, he said that Obama's achievement was "putting what was broken back together and getting our troops home, which we intend to do ..." When it was pointed out that the proposed U.S. withdrawal had been set in the Status of Forces Agreement signed by the Bush administration, Gibbs claimed it was the "political pressure" of candidate Obama that made such an agreement possible.

On the merits, this is pretty pathetic stuff. The same administration that blames all of its mistakes on problems it inherited now wants to take credit for accomplishments it inherited.

Still, it's good news. First and foremost, it's a sign that the war in Iraq, while costly and deservedly controversial, was not for nothing. Putting Iraq on a path to democracy and decency is a noble accomplishment for which Americans, of all parties, should be proud. Even if you think the war wasn't worth it or that it was unjustified, only the truly blinkered or black-hearted can be vexed by the fact that Saddam Hussein's regime is gone and the country is on the path to better days.

Second, it shows that America's victories aren't Republican or Democratic victories, but American victories. The same goes for its losses. At times it seemed that at least some opponents of the Iraq war wanted America to lose because they thought that was synonymous with Bush losing. It doesn't work that way.

Indeed, that's what's so interesting about the strange turn in the zeitgeist. Many of the war's most ardent opponents claimed that Americans didn't like the war for the same reasons the hard left didn't. But all that talk about "imperialism," "neoconservatism," "Cheney-Halliburton blood for oil" and the rest was not at the core of the war's unpopularity. What most Americans didn't like was that we were losing militarily and losing the precious lives of our troops. Unlike the hard left (and certain quarters of the isolationist right), most Americans don't care that the U.S. has troops stationed all around the world. They don't think we're an evil empire because of our troops in South Korea or Germany.

What most Americans care about is winning, or, more accurately, winning in a good cause. Public attitudes are still raw when it comes to the war, and for good reason. But a generation from now, if Iraq is a stable, prosperous democracy, Americans will in all likelihood think the war was worth it, and that George W. Bush was right.