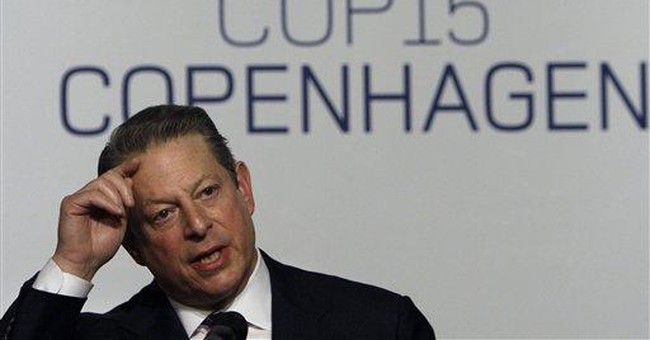 I watched the Super Bowl in the chilled air of the GFISZ (that's Goldberg Family Ice Station Zebra). Here in Washington, we haven't seen this much snow since at least 1922. The blizzard of 2010 took out our electricity for a day. Digging out from "snowmaggedon" was nothing less than an Augean challenge, though my lower back is, alas, less than Herculean. Meanwhile, snow canceled my daughter's 7th birthday party Saturday and her school Monday. We're slated for another foot by Wednesday.

Suffice it to say I'm not panicking about global warming right now.

Perhaps that's why I was bemused and intrigued by Audi's Super Bowl ad.

Audi's "Green Police" (available on YouTube) depicts an America where citizens are arrested -- roughly -- for even minor environmental infractions. A man at the supermarket asks for a plastic shopping bag and has his head slammed against the counter as he's cuffed by a Green Police officer. "You picked the wrong day to mess with the ecosystem, plastic boy," quips the cop. When officers find a battery in the wrong suburban garbage bin, one big cop yells, "Battery! Let's go! Take the house!"

It's a fascinating commercial. They even got Cheap Trick to rerecord "Dream Police" as "Green Police." But just as the satire becomes enjoyable, the message changes. Until the pitch for Audi intrudes, you'd think it was a fun parody from a right-wing free-market outfit about the pending dystopian environmental police state.

The pitch involves an "eco roadblock." A man driving an Audi A3 TDI is singled out by an inspector. "We've got a TDI here," he says. "Clean diesel," he adds approvingly.

"You're good to go, sir," the cops inform the driver. The smiling Audi owner accelerates to happiness on the open road. The screen fades to black and the tagline appears -- "Green has never felt so right."

So, instead of some healthy don't-tread-on-me mockery, the moral of the story is that we should welcome our new green overlords and, if we know what's good for us, surrender to the New Green Order.

Some eco-bloggers disliked the ad because it reinforces the association of undemocratic statism or PC bullying with environmentalism. Perhaps that's why the New York Times dubbed it "misguided."

Meanwhile, some conservatives didn't like it because it makes light of what they believe is actually happening. After all, in America and Europe, the list of environmental crimes is growing at an almost exponential rate. The ad is absurd, of course, but not nearly as absurd as Audi thinks.

What was Audi's intent? Presumably, to sell cars.

"The ad only makes sense if it's aimed at people who acknowledge the moral authority of the green police," writes Grist magazine's David Roberts on the Huffington Post. The target audience, according to Roberts, are men who want to "do the right thing." He's certainly right that the ad isn't aimed at people (whom he childishly mocks as "teabaggers") who worry that their liberties are being eroded.

But the message is hardly "do the right thing."

To me, the target demographic is a certain subset of spineless upscale white men (all the perps in the ad are affluent white guys) who just want to go with the flow. In that sense, the Audi ad has a lot in common with those execrable MasterCard commercials. Targeting the same demographic, those ads depicted hapless fathers being harangued by their children to get with the environmental program. MasterCard's tagline: "Helping Dad become a better man: Priceless."

The difference is that MasterCard's ads were earnest, creepy, diabetes-inducing treacle. Audi's ad not only fails to invest the greens with moral authority, it concedes that the carbon cops are out of control and power-hungry (in a postscript scene, the Green Police pull over real cops for using Styrofoam cups). But, because resistance is futile when it comes to the eco-borg, you might as well get the best car you can.

It will be interesting to see whether the ad actually sells cars. The premise only works if you take it as a given that this Gorewellian nightmare is inevitable. But the commercials arrive at precisely the moment when that inevitability is unraveling like an old pair of hemp socks. The global warming industry is imploding from scientific scandals, inconvenient weather, economic anxiety and surging popular skepticism (according to a Pew Research Center survey released in January, global warming ranks 21st out of 21 in terms of the public's priorities).

This week, I don't want a car to get past the Green Gestapo. I'm looking for something that can power through the frozen tundra separating me from the supermarket.