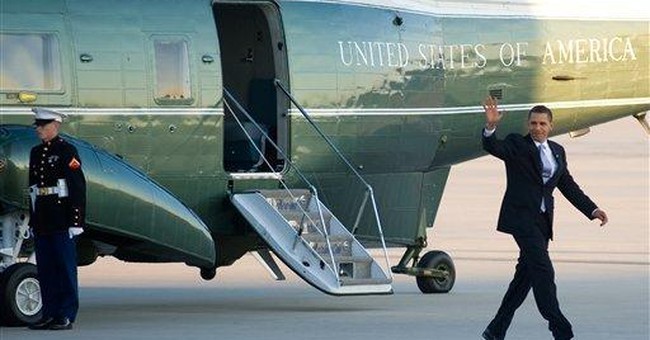 One of the most macabre images I've ever heard described came in the aftermath of the Asian tsunami in 2004. Before the tidal wave crashed on shore, beachgoers stood around and idly gaped as the water drastically receded. Bewildered, they didn't realize they were looking at the prelude to a calamity.

The Democratic Party looks more and more like those beachgoers every day, watching popular support recede, oblivious to the Perot tsunami coming our way.

In 1992, the incumbent president, George H.W. Bush, was a disappointment to his party's base and a pariah to the Democrats. Government seemed to have lost its grip. The deficit became a massive issue, a symbol of out-of-control government. The hangover of Cold War sacrifices, the S&L bailout, runaway crime, huge trade deficits, the long-term trend of manufacturing decline and, of course, the recession contributed to the sense that America desperately needed to get its house in order.

Ross Perot, a quirky Texas billionaire, tapped into that anxiety perfectly. Western, pro-business, no-nonsense, pro-choice and pro-gun, culturally conservative but with little interest in culture-war issues, he managed to thread the needle between both parties. He also benefited enormously from the fact that his independent bid for the presidency was seen by the press as an indictment of both the incumbent Republican and the "Reagan deficits" that Democrats and the media had been denouncing for years. At one point, Perot led in the polls, and if he hadn't dropped out and then rejoined (or had he not been so Yosemite Sam-goofy), he might have done even better than his historic 19 percent of the popular vote.

It's still debated whether Perot cost Bush the election. But even if Clinton would have won regardless, Perot's candidacy had an underappreciated significance. He forced Clinton to double-down on his "New Democrat" appeals. Clinton had already fashioned himself as a "different kind of Democrat" who would "end welfare as we know it." But the Perotista revolt of "raging moderates" and "angry centrists" reinforced Clinton's rhetorical commitments and the voters' expectations.

Historian Richard Hofstadter identified the phenomenon decades earlier when he wrote of third parties in U.S. politics: "Their function has not been to win or govern but to agitate, educate, generate new ideas and supply the dynamic element in our political life."

He added: "Third parties are like bees: Once they have stung, they die." The Perotistas stung in 1992.

Once elected -- with only 43 percent of the vote -- Clinton seemed to betray his promises to govern from the center. His heavy-handed "Hillarycare" effort was exactly the sort of thing the Perotistas didn't want (never mind gays in the military and all that). The Democrats were shellacked in 1994, losing the Senate and the House to Newt Gingrich and his "Contract with America," which was a carefully calibrated appeal to centrism.

The liberal interpretation of this sea change has always been freighted with denial. The late ABC News anchor Peter Jennings said the election was a giant hissy fit: "Ask parents of any 2-year-old and they can tell you about those temper tantrums. ... The voters had a temper tantrum."

In part because Perot voters and sympathizers were disproportionately white and male, and because they expressed their dismay with Clinton by voting for the GOP, the Democrats and the media ginned up the "angry white male" theory of American politics. The same voters who were part of a "vital center" when attacking a Republican president were increasingly recast as dangerous minions of Rush Limbaugh and the forces of hate when they aligned with Republicans.

Fast-forward to today. The tea-party protesters are in large part the heirs of Perotism, and they are being subjected to the same insults. Liberal commentators are deaf to the tea partyers' disdain for both political parties, preferring to cast the protesters as a deranged band of birthers and racists or hired guns of a Republican "AstroTurf" campaign.

Meanwhile, as National Review's Ramesh Ponnuru has argued, the Democrats have convinced themselves that the moral of Clinton's failed health care push is not that he was wrong to try, but that he was wrong not to cram it through against popular opposition.

President Obama promised a "new era of fiscal responsibility," but he's governing as if exploding the size of government is what Americans want, polls be damned. The Democrats' budget games and giveaways amount to poking the angry Perotista beast with a stick.

If the GOP can convincingly align with and exploit the growing Perotista discontent, it very well might ride to victory on a tsunami the Democrats can't even see.