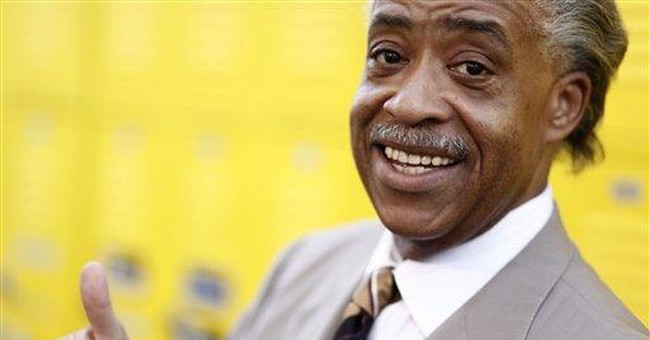 Of all the poisonous, ugly and intellectually vapid controversies ginned up in my lifetime, the current breakout of St. Vitus' Dance over the "racist" opposition to Barack Obama may be the most egregious.

Someone in the control room surely yelled, "Cue the laugh track!"

In case you don't get the joke, this entire "debate" over whether opposition to Obama's health care reform is racist is totally, completely and in every way conceivable an invention of the left.

Oh, sure, there are some racists who oppose Obama. Shocking news, that.

And, yes, a tiny, tiny fraction of the signs at the Tea Party protests last weekend were racially insensitive. But if that's how we're going to score, then opposition to the Iraq war is anti-Semitic. After all, I saw a bunch of signs at antiwar protests that said bigoted things about Jews.

Meanwhile, no significant conservative politician, pundit or intellectual has said that they object to Obama's agenda because he's black. Rather, they've said they oppose his agenda for precisely the same reasons they oppose Nancy Pelosi's and Harry Reid's and Barney Frank's agendas. They stand athwart Obama yelling "Stop!" just as they did with Clinton and Democratic presidents before him.

Magically, the alchemic powers of Obama's black skin transmogrify the same arguments and the same rhetoric into racism. Saying "you're wrong" to a white politician is a disagreement; saying it to a black politician is like shouting through Bull Connor's megaphone.

It's been said that a grand jury can indict a ham sandwich. Well, these people can indict a ham sandwich for being racist. There is not an issue, topic or flavor of ice cream that Al Sharpton won't inject racism into. But suddenly Larry King needs to ask him whether opposition to socialized medicine is racist -- as if Sharpton's response was ever in doubt. Why not just ask the host of an infomercial whether you really need a ShamWow?

Left-wing writers spent the week droning on about how it's now racist to say "I want my country back." These amnesiacs are blissfully unaware that "taking back" America was the rallying cry of the Democratic Party for eight years under George W. Bush. Anti-white racists all?

Jimmy Carter sighs, "It's an abominable circumstance, and it grieves me and concerns me very deeply."

Well, ditto. Except I think the abominable circumstance is the Vesuvian eruption of nonsense belched forth from distempered liberals frustrated by their inability to win a public policy debate.

An "overwhelming proportion" of the vocal opposition to Obama stems from the "inherent feeling" that "an African-American should not be president," testifies the de facto voice of Southern self-loathing and pharisaical pomposity.

Really, President Carter? Based on what? Polls you've studied? Which ones? Or did you descend from the temple of the Carter Center, flee your enabling entourage of sycophants and canvass some neighborhoods yourself? How many people told you they don't think a black man should be president? One? Two? Zero? Or are you simply reading minds again?

The good news is that the race peddlers have undermined themselves. The notion that opposing skyrocketing deficits and socialized medicine is racist is met with eye rolls by the vast majority of Americans, who do not need Sharpton and Carter to tell them what is -- or is not -- in their own hearts.

And, in fairness, when it became clear that Carter had turned this "debate" from mere fraud to farce, it suddenly dawned on some Democrats, including those in the White House, that smearing millions of constituents and swing voters (many of whom voted for Obama) as racists isn't the best politics. So one cheer for those who objected to this idiocy too little and far too late.

But others just won't let go. Maureen Dowd of The New York Times hears Rep. Joe Wilson shout, "You lie!" And her instinctive response is: "fair or not, what I heard was an unspoken word in the air: You lie, boy!"

It's the "fair or not" that gives Dowd away. She admits to hearing racism whether or not it's warranted. That's called prejudice. And unlike Wilson's foolish outburst, Dowd's was carefully considered. Dowd, Carter and Sharpton can't grasp that conservatives are less hung up on race than they are and that we can get past Obama's skin color. "Some people just can't believe a black man is president and will never accept it," writes Dowd. She's right. She's one of them.