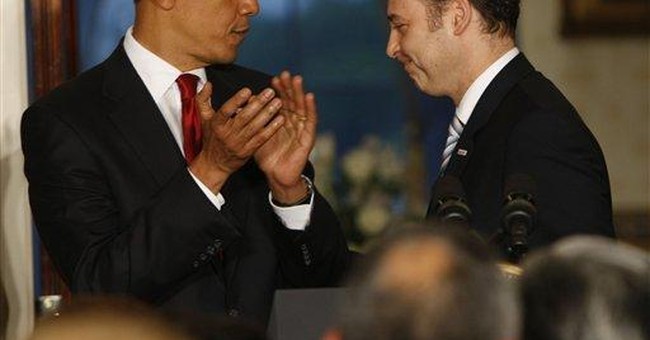 Some days you have to ask yourself, my God, what if these people were Republicans?

Democrats took back Congress in 2006 and the presidency in 2008 in no small part because of their ability to bang their spoons on their high chairs about what they called the Republican "culture of corruption." Their choreographed outrage was coordinated with the precision of a North Korean missile-launch pageant. And, to be fair, they had a point. The GOP did have its legitimate embarrassments. California Rep. Randy "Duke" Cunningham and lobbyist Jack Abramoff were fair game, and so was Rep. Mark Foley, the twisted Florida congressman who allegedly wanted male congressional pages cleaned and perfumed and brought to his tent, as it were.

Of course, it wasn't as if Democrats were without sin. Louisiana Rep. William Jefferson was indicted on fraud, bribery and corruption charges in 2007, after an investigation unearthed, among other things, $90,000 in his freezer. Then-New York Gov. Eliot Spitzer was busted in a prostitution scandal.

But that's all yesterday's news. Let's look at the here and now. Barack Obama, who vowed he'd provide a transparent administration staffed with disinterested public servants with the self-restraint of Roman castrati, appointed an admitted tax cheat to run the Treasury Department -- and he's hardly the only one in the administration.

New York Rep. Charles Rangel, chairman of the House Ways and Means Committee, is under investigation for, among other things, failing to report income from his Caribbean villa. Meanwhile, Sen. Christopher Dodd, chairman of the Senate Banking Committee, got sweetheart deals from subprime lender Countrywide and has yet to adequately explain his too-good-to-be-true deal on his million-dollar "cottage" in Ireland, which he may have gotten in exchange for finagling a pardon (from President Clinton) for a felon. Oh, Dodd also secretly protected those AIG bonuses that raised such a ruckus.

Rep. Jack Murtha of Pennsylvania, Nancy Pelosi's moral authority on military matters during the Iraq war, has been revealed as a kleptomaniac of sorts, delivering as much of the federal budget as possible to various cronies and lobbyists.

Former Sen. John Edwards, who had an affair even as he was scoring Oprah-points as the supportive husband during his wife's battle with breast cancer, is being investigated by the feds for the improper use of campaign funds. It looks like the silky-haired champion of the little guys may have used their donations to bribe the alleged "baby mama" into silence.

And it would be a shame to let it pass that Obama's Senate seat was put up for sale by the then-governor of Illinois, Rod Blagojevich. A congressional ethics board is investigating whether Illinois Rep. Jesse Jackson Jr. tried to buy it.

But you know what? We ain't seen nothing yet. For starters, the real corruption isn't what the media are ignoring or downplaying as isolated incidents. It's what the media are hailing as strokes of bold, inspirational leadership. The White House, as a matter of policy, is rewriting legal contracts, picking winners (mostly labor unions and mortgage defaulters) and singling out losers (evil "speculators"), while much of the media continue to ponder whether Obama is already a greater president than FDR.

If a Republican administration, staffed with cronies from Goldman Sachs and Citibank, was cutting special deals for its political allies, I suspect we'd be hearing fewer FDR analogies and more nouns ending with the suffix "gate."

Take Obama's "car czar," Steven Rattner. According to ABC's Jake Tapper, Rattner is accused of threatening to use the White House to smear a Chrysler creditor if it refused to back the administration's Chrysler bankruptcy plan. He's also connected to a massive pension fund scandal involving the investment firm he used to run. One allegation is that conspirators used investments in the low-budget movie "Chooch" to expedite their alleged chicanery. Chooch, by the way, is Italian slang for "jackass," which just happens to be the Democrats' mascot.

More to the point, political corruption is inevitable whenever you give hacks -- of either party -- too much discretion over public funds. Businesses look to Washington for profits instead of to the market. The thing is, this has become the governing philosophy of the Democratic Party, from banking and cars to health care and now student loans. The federal government is taking over, and the culture of corruption inevitably trickles down. That in itself should be a scandal. Call it "Choochgate."