Obama's Bailout for the Despots 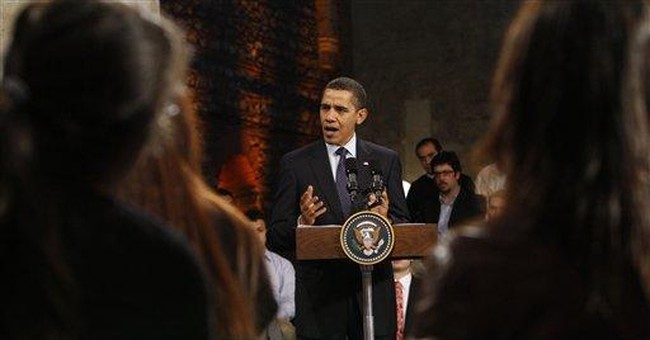 Now admittedly, the council wasn't on the verge of going out of business. Heck, if there were a nuclear war, the pinstriped thugs of the United Nations' "human rights" bureaucracy would probably be all that's left to keep the cockroaches company.

But although the effete goons of the UNHRC aren't going bankrupt, Obama has bailed them out in another way. He's given the repugnant cabal that dominates the council a fresh injection of political capital.

President Bush refused to cooperate with the agency. Obama, on the other hand, feels it is vital to work with the organization from the inside.

The old U.N. Commission on Human Rights was a travesty, recognized -- even by U.N. leadership -- as a Petri dish of moral decay and political corruption. It was the foremost, though far from the sole, U.N. agency dedicated to the defamation, demonization and destruction of Israel. It was closed down in 2005, only to be replaced the following year with the Human Rights Council. Not surprisingly, the transformation was as superficial as it sounds. Once the ink was dry on the new stationery, the world's worst human rights abusers flocked back to run the council.

Initially, reformers had the wacky idea that the new human rights body should have as members only countries that actually care about human rights. Preposterous, responded diplomatic flacks for dictators from Asia, Africa and the Middle East. Then there was the idea that the council should regularly review the human rights records of every U.N. member, not just Israel. But the "universal periodic reviews" became a joke, as countries such as Egypt and Russia received glowing reviews that might as well have been written by their tourism bureaus.

The council's membership is determined by region, which has allowed the Muslim countries from the African and Asian blocs to hold majorities, while most European nations have been too scared to block their agenda. This means that when the U.S. does get a seat at the table, it will merely replace a Western nation that already respects human rights.

Anyway, the old crew scurried on board the new ship as the old one sank. Joining the Muslim countries are such stalwarts of human rights as China and Cuba. The only reason Mordor didn't make the list is that J.R.R. Tolkien forgot to have Sauron denounce the "Zionist entity" in "The Lord of the Rings."

Perhaps such glibness seems out of place, but it is hard to take the complaints of some of these women-oppressing, homosexual-executing, free-speech-banning countries seriously. Just last week, the Arab League, which constantly condemns Israeli "genocide," welcomed Sudan President Omar Hassan Ahmed Bashir to its summit. It was intended as a way to chastise the International Criminal Court for bothering to indict the Butcher of Darfur when it could be putting Jews in the dock.

At the UNHRC, Israel's defensive war against Gaza was treated as history's greatest crime, while the deaths of 16,000 Somalis at the hands of invading Ethiopians were ignored. Since 2006, the council has opted to shut down investigations of Congo, Cuba, Liberia and Belarus. The agency hasn't even been a speed bump on Zimbabwe's descent into hell. It passed a nonbinding, Pakistan-sponsored resolution condemning "defamation of religion" that 180 groups from around the world cautioned could help Islamic theocracies crush dissenters in the name of protecting Islam from insult. And it has condemned Israel more than it has condemned all other U.N. member countries combined.

The Obama administration, which passionately believes in the U.N. as a force for good, thinks it can change the council simply by being on it. "We have a record of abject failure from having stayed out. We've been out for the duration, and it has not gotten better. It's arguably gotten worse," Susan Rice, the U.S. ambassador to the U.N., told Politico. "We are much better placed to be fighting for the principles we believe in ... by leading and lending our voice from within."

But such thinking is only possible if you think the U.N. is a democratic, deliberative body. It isn't. Some of the member nations are liberal democracies. Some are backward, cruel regimes with well-coiffed front men who only do their masters' bidding. Valuing villains as equal to democrats is a recipe for moral rot.

No doubt the U.S. will "succeed" in tempering the UNHRC's actions. But such victories will pale in comparison with the unearned validation we grant the council by our participation.