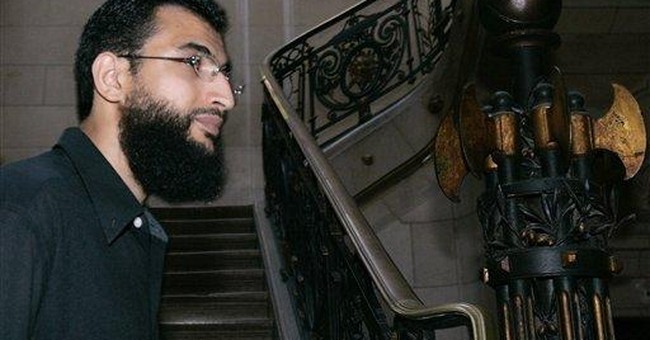 "Some men aren't looking for anything logical, like money. They can't be bought, bullied, reasoned or negotiated with. Some men just want to watch the world burn."

That's a line from the movie "The Dark Knight." Maybe it's because I'm just a comic-book-loving fool, but that's the first thing that popped into my mind when I read the Gitmo Five's statement.

"We are terrorists to the bone," the Guantanamo detainees proclaimed. Khalid Sheik Mohammed, the mastermind of 9/11, and his four comrades consider the charges that they slaughtered nearly 3,000 Americans to be "badges of honor, which we carry with pride."

In a six-page document released by a military judge, the men swear that America will fall like "the towers on the blessed 9/11 day."

Back to "Dark Knight." In that movie, The Joker -- brilliantly played by the late Heath Ledger -- isn't interested in mere criminality. In an ingenious scene, he pours gasoline on an enormous pile of cash and sets it ablaze. Why? Because he doesn't need money. The things he needs -- guns, dynamite, gunpowder -- he can get cheaply enough. The Joker wants to send the message that he's not just a criminal, that "everything burns."

In November 2000, when America was still enjoying the last days of the tech boom and was still confidently treating terrorists like bank robbers and counterfeiters -- i.e. run-of-the-mill criminals with all the rights and lawyers and rules and talk that entails -- Louis Pepe, a prison guard at the Metropolitan Correctional Center in Manhattan, was doing his job. He was watching Mamdouh Mahmud Salim, a top lieutenant for Osama bin Laden, held on charges that he was one of the conspirators behind the 1998 U.S. embassy bombings in Africa.

Salim wasn't just a criminal. He sharpened a plastic comb into a stabbing fang and shoved it into Pepe's eye and 3 inches into his brain. An elite member of the MCC Enforcers Disturbance Control unit, the 300-pound Pepe was nonetheless overwhelmed. Salim and his partners beat Pepe to death, or at least they thought they did. Using his own blood, they painted a Christian cross on his torso -- a message less subtle than The Joker's.

Brain-damaged and nearly crippled with injuries, Pepe and his story received little attention because, in those pre-9/11 days, he wasn't a casualty of war, he was merely a victim of criminals.

Of course, we have bad men in prison who aren't terrorists and who are just as evil, just as unredeemable, just as willing to take pride in the suffering and fear they dole out.

The Guantanamo Five aren't gangsters, and they aren't criminals. Criminals usually kill people to get cash. Terrorists get money so they can kill people. Criminals do evil to get pleasure. Terrorists eschew worldly pleasure to do evil. Bank robbers may strap bombs to themselves, but they do it to terrorize tellers into handing over the money. Terrorists skip that part and go straight to blowing themselves up.

"We shall continue the Jihad no matter how long the way, until the last breath and the last beat of the pulse -- or until we see the Islamic state established," proclaimed Abdullah Azzam, one of the spiritual founders of al-Qaida.

No doubt Abdullah Ghulam Rasoul shares that sentiment. He was an inmate at Guantanamo until he was released to Afghanistan in 2007. Now he's overseeing Taliban operations against U.S. forces in southern Afghanistan, where violence is on the rise.

Rep. Jerrold Nadler is the chairman of the House Constitution, Civil Rights and Civil Liberties Subcommittee. The hole where the World Trade Center used to be is in his district. Yet he says that people like Mohammed Atta, who led the 9/11 attack, should be treated like any other criminals. Vice President Biden has offered exact percentages of Taliban members who can be negotiated with or bought off. Obama is closing Guantanamo Bay, and the White House is looking for prisons, including on American soil, to hold the Gitmo Five and others like them.

We'll see how that works out.