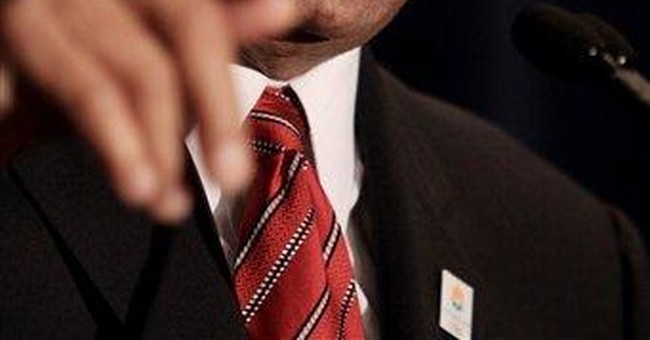 The Democrats are folding like an ironing board over this Roland Burris business, and for some reason people are surprised.

Just to catch up: The governor of Illinois, Rod Blagojevich, is in scalding-hot water over allegations he wanted to sell Barack Obama's still-warm Senate seat. This was discovered via federal wiretaps of the helmet-haired governor's phone conversations and fueled by some juicy dialogue better suited for fleet week in Manila.

In response, Senate Democrats took a Churchillian stand, vowing that no Blago appointee would ever be accepted by the Senate. No appointee, the Democrats insisted, so tainted with scandal could be allowed to sit in the same chamber that Ted Kennedy calls home.

The party of the infinitely elastic "living Constitution" suddenly planted their flag of principle in the terra firma of constitutional concrete and watched it flap in the hot wind of their political bloviation. Even after Blagojevich announced he was appointing Roland Burris, a respected but unremarkable black Illinois politician, to Obama's seat, Senate Majority Leader Harry Reid of Nevada stood his ground, pronouncing the move "unacceptable."

But that resolve melted like a Hershey bar in a Nevada parking lot the moment Mr. Burris came to Washington. Apparently, the Constitution wasn't on the Democrats' side (Fancy that!) and liberals lacked the stomach to stand in the doorway of the Capitol and block admittance of a black man.

Indeed, that was Blago's thinking all along. When the Democratic governor announced his decision, he assembled various black Illinois pols to support the move, including Rep. Bobby Rush, a Democrat from Chicago's South Side and a founder of the Illinois chapter of the Black Panther Party. Rush immediately played the race card at the press conference. "There are no African-Americans in the U.S. Senate. And I don't think any U.S. senator who's sitting in the Senate right now wants to go on record to deny one African-American from being seated in the U.S. Senate," he said.

In case you needed a ball-peen hammer to drive the point into your forehead, he added: "I would ask you to not hang or lynch the appointee as you try to castigate the appointer ..."

Rush assembled more than 60 black ministers Sunday to rally around Burris at a Chicago church. "We are just faced with a hard-headed room of people in the Senate who want to keep an African-American out of the Senate," Rush said. He condemned the Senate, where until recently Barack Obama served before becoming president of the United States, as "the last bastion of plantation politics."

And that was all she wrote for Reid, who by next week should be on all fours like Kevin Bacon in "Animal House," shouting, "Thank you sir! May I have another?" as Burris paddles him.

Now, I certainly understand why Reid & Co. caved. For starters, Reid's not exactly the brightest crayon in the box.

But why all the fuss in the first place? Isn't this how it always works? The Atlantic's Ta-Nehisi Coates, an impressive African-American writer, is amazed that "Reid has been outmaneuvered by the sort of overt, hamfisted identity politics deployed in the '70s."

The '70s? So this sort of thing stopped more than three decades ago? I had no idea. What planet do my newscasts come from?

I thought this was simply what liberals and Democrats do. When Newt Gingrich introduced the Contract with America, black Democrats denounced it as racist. Charlie Rangel proclaimed, "Hitler wasn't even talking about doing these things." When impeachment threatened Bill Clinton, he draped himself in black ministers and staffers. The NAACP ran an ad narrated by the daughter of James Byrd, a black man brutally murdered in a hate crime, insinuating that then-presidential candidate George W. Bush's refusal to support hate-crime legislation in Texas was like murdering her father again. In the recent campaign, nearly the entire liberal punditocracy insisted that opposition to Barack Obama could only be explained by racism, a story line egged on by Obama himself when convenient.

And don't tell me Blago's corruption changes the equation. Has anyone read about the baleful history of minority set-aside programs in cities like Chicago? Cronies and grifters are routinely given sweetheart contracts under the guise of fighting discrimination when in reality it's all a riot of kickbacks, "pay-to-play" and cronyism. People don't call Jesse Jackson a shakedown artist for nothing.

There are two reasons why this spectacle shocks some liberals. The first is that Blago, Burris and Rush used this tactic on fellow Democrats. And since Democrats can't be motivated by racism, any ploy like this must be cynical. When the same gambit is used on Republicans, it's called "speaking truth to power." Second, some honestly believed that Obama represented a real change of the racial landscape. So far, alas, these folks just look naive.