O.J., Obama and Race in America 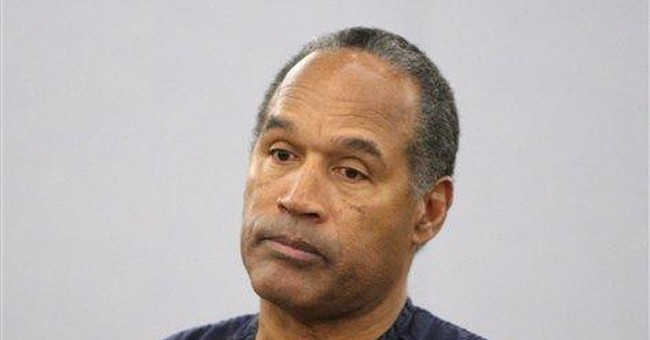 On Oct. 3, 1995, O.J. Simpson was acquitted of murdering his ex-wife, Nicole, and her friend, Ronald Goldman. But few people today still defend his innocence. Even Simpson suspended his search for the "real" killer long enough to come perilously close to admitting guilt, including in his semi-confessional book, "If I Did It."

But 13 years ago, the question of Simpson's guilt and the "meaning" of his trial were the most debated issues in America. According to Talkers magazine, the Simpson case was the most bandied topic of 1995 -- and of the entire first half of 1990s.

Experts claimed -- and polls at the time seemed to show -- that this American Dreyfus affair illuminated a permanent and unbridgeable racial divide. Just rereading the commentary from the time is exhausting. Black intellectuals insisted that racist cops or "the system" routinely railroaded black men, so why, they asked, should white America doubt that was happening to O.J.?

White liberals played along. "I think the general black attitude might be that white people place a huge emphasis on innocent or guilty because that way they can discard large social questions," Norman Mailer condescendingly explained in New York magazine. "A focus on individual innocence or guilt works to the white establishment's advantage."

Uh huh. So, in a truly color-blind society, questions of guilt or innocence would be totally absent from murder trials. Nifty.

Of course, some complaints about the criminal justice system had merit. But Simpson's defenders turned Mailer's point on its head. They didn't want to discuss guilt or innocence at all; they only wanted to discuss the establishment, to "put the system on trial." To Wilbert Tatum, editor of the black weekly Amsterdam News, Simpson "became every black male who's ever been involved in the criminal justice system."

"Now we recognize that in a fundamental sense, we really do live in different worlds," Cornel West pronounced in the New Yorker shortly after the not-guilty verdict. He added, as if to illustrate the point, "I think he's innocent, I really do."

The National Enquirer covered the trial fearlessly. You couldn't say the same thing about many other media outlets. "Fear of being called racist transcended everything in the newsroom," wrote the New Yorker's legal correspondent, Jeffrey Toobin -- only after he deemed it was safe. "Our caution and fear, however, misled. The case against Simpson was simply overwhelming. When we said otherwise, we lied to the audience that trusted us."

While liberals parroted the Simpson line that the system was the criminal, conservatives denounced the acquittal as proof that the system was broken from the other end. They thundered about the "death of outrage," particularly on the part of the milquetoast media, which knew he was guilty.

Now Simpson is finally going to prison. Alas, not for murder but for, among other things, armed robbery, assault with a deadly weapon and kidnapping. This time everyone appears pleased. The evidence against Simpson is hardly more damning than the billion-to-one DNA evidence last time. Yet no one sees Simpson as a victim or symbol this time, which is odd.

Given that Barack Obama's every utterance seems to spur the minting of a new commemorative plate to the cause of racial progress, you'd think more would be made of this moment.

The only sustained controversy of Obama's campaign arose over his former pastor Jeremiah Wright's bilious rhetoric, which Obama largely defused with his "A More Perfect Union" speech on race. Though eloquently written and compellingly delivered, it was often contradictory and deeply self-serving. The best part, however, was his explanation of his objection to Wright's ravings.

"The profound mistake of Rev. Wright's sermons is not that he spoke about racism in our society. It's that he spoke as if our society was static; as if no progress has been made; as if this country ... is still irrevocably bound to a tragic past. But what we know -- what we have seen -- is that America can change. That is the true genius of this nation. What we have already achieved gives us hope -- the audacity to hope -- for what we can and must achieve tomorrow."

Obama's hopes for this country and mine differ, to be sure. But on this point, Obama was absolutely right. America's racial story begins horribly with slavery but has become one of unfolding success. Those who saw Simpson as a symbol of permanent division and the impossibility of progress were wrong. What better proof of that is there than that Obama, the nation's first black president, will be figuring out the floor plan at the White House at almost exactly the same moment Simpson will be figuring out how the toilet works in his cell?