Obama Without His Script 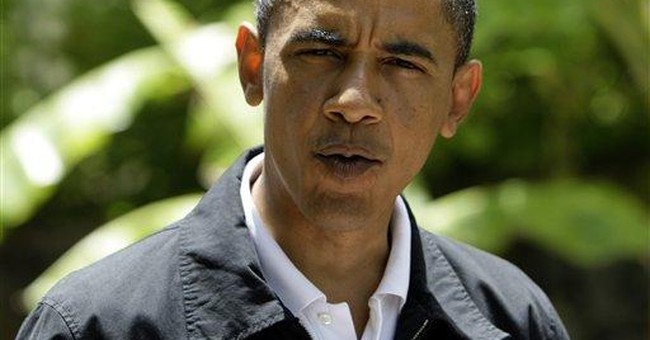 The Obama campaign has for months pursued the odd strategy of having the junior senator from Illinois act as if he were already kinda-sorta president of the United States. In June, it tried sticking a quasi-presidential seal on his lectern. In July, Obama conducted what seemed like official state visits with foreign leaders and delivered something like a "prenaugural" address in Berlin, inviting comparisons to JFK and Reagan.

It's an understandable ploy. More than most candidates, Obama needs to appear like a plausible commander in chief because he's not only inexperienced (during the last Summer Olympics, he was still an Illinois state legislator), he's novel. The name, the skin color, the cosmopolitan upbringing: Fair or not, all of these things give Obama the aura of otherness that is both part of his charm and a potential handicap.

If the would-be president can seem plausibly presidential, voting for him might not seem like such a crapshoot. It all makes sense, even if it fosters an air of presumptuousness.

(From David Letterman's top 10 signs Obama is overconfident: "Having head measured for Mount Rushmore," and "Offered McCain a job in gift shop at the Obama Presidential Library.")

Now fate has given Obama a chance to be presidential rather than pretend. Taking advantage of the Olympic distraction in Beijing, the Russians invaded Georgia, a democratic U.S. ally. Initially, the Russians bombed civilians, rolled tanks across an internationally recognized border and threatened to launch an all-out, destabilizing war. Now it looks as if their army has cut Georgia in two.

Moreover, Russian bombs reportedly targeted the Baku-Tbilisi-Ceyhan pipeline, which runs through Georgia on its way to the Mediterranean - the only oil pipeline in Central Asia not under Russian control. Russia is tightening its chokehold on oil and gas at precisely the moment energy costs have become the paramount domestic issue in the U.S. presidential campaign.

First, on Friday, he gave a conventional written statement calling for calm, United Nations action and "restraint" from both sides - followed an hour later by a slightly stronger condemnation of Russian aggression and a call for a cease-fire.

So for an international crisis, Obama puts away the soaring rhetoric and hides behind a statement we might expect from any State Department functionary. But that's not to say he didn't make it to the cameras. The next day he headlined a rally celebrating his vacation in Hawaii. He promised "to go body surfing at some undisclosed location."

During Obama's make-believe presidency, we've heard about bold action, about the courage to talk to dictators. When faced with a real "3 a.m. moment," Obama - who boasts roughly 200 foreign policy advisors - proclaims, "I'm going to get some shave ice."

Of course, this is a bit unfair. Obama had planned his well-deserved vacation for a long time. But presidential vacations are always well planned - and often interrupted.

Indeed, President Bush's jaunt to the Beijing as a "sports fan" should also have been cut short the moment tanks started crushing a country he'd proclaimed a "beacon of liberty."

By Monday, Bush and Obama were playing catch-up to Sen. John McCain, who grasped the gravity from the start. McCain, whose support for Georgia is long-standing, immediately denounced Russian aggression and demanded an emergency meeting of NATO and Western aid to the fledgling democracy.

The geopolitical significance of the Georgia crisis at this stage is hard to gauge. Russian Prime Minister Vladimir Putin may not wish to revive the Soviet Union, but he clearly seeks to restore Russia's imperial stature. And Item One on that agenda is to crush Georgia's independence and smother hopes for NATO's expansion to Russia's "near abroad."

The significance for Obama is easier to calculate. He has been playacting at being presidential in order to convince voters that we live in a "new moment" with "new challenges" - and that he is the new man to deal with them.

Yet this moment calls for more than playacting, and Obama looks lost without a presidential script. Events in the Caucasus - and in Beijing - suggest that the times aren't so new after all. Two powerful antidemocratic foes are once again flexing their muscles when America seems weak and distracted.

That is no new challenge but a very old one. Perhaps this isn't a time for a novice spouting grand rhetoric about a new page in history, but for someone who's actually read the pages of some old but still relevant books. Perhaps this is not the time for playacting.

Perhaps it is not the time for body surfing.