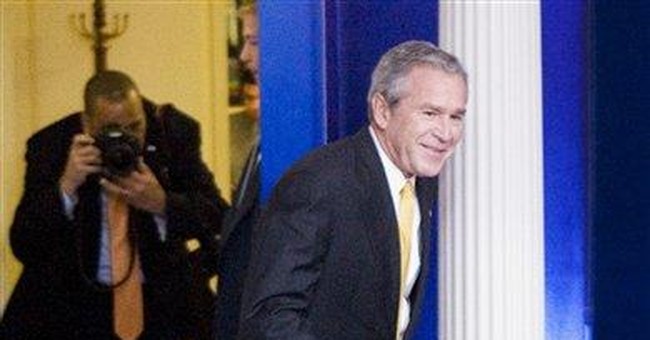 The year was 2007. Hope, incandescent in its infancy, shared its warming glow. Britney Spears was heading for rehab, tainted pet food was killing cats, but in Washington the songbirds of spring sang their sweet, sweet songs of rebirth, even in the dead cold of January, to herald the return of truth and justice to our nation's capital.

The Democrats, always the better angels of American politics, had returned to the halls of power in Congress from their cruel banishment. Huzzah and hooray, cheered all right-thinking people, for corruption is on the run and decency has the whip hand in the peoples' house. Atop the throne sat Nancy Pelosi, the first woman speaker of the House. Grandmother of all that is good, leader of the forces of light - a light that when shone upon the Capitol caused the likes of Tom DeLay to scramble under the proverbial refrigerator, seeking shelter from the searing rays of the reforming spirit that warms the decent and scorches the wicked.

"It burns! It burns!" shrieked the architect of the K-Street Project at the glare of Pelosi's righteousness. Not literally, perhaps, but editors of the New York Times and the lefty hosts of the blogosphere liked to think he did.

Remove the paving stones of good intentions and the road to hell becomes a superhighway called “K Street,” where lobbyists rule like marauders in a Mad Max movie. Or so we were told for more than a decade.

The K Street Project symbolized all that was tawdry and repugnant about Washington, according to the Democrats. New York Times columnist Paul Krugman assured readers that the K Street Project lay at the heart of the "largest corruption scandal since Warren Harding."

What was this perfidious project? DeLay and his corrupt collaborators cajoled industries seeking help from Republicans to hire Republicans. Moreover, it was alleged, lobbyists supportive of Republican efforts would get better "access" to Republican lawmakers.

I know what you're thinking: Why weren't these scoundrels hung?

Nevada Sen. Harry Reid insisted that the KSP was "a shakedown machine that would make the mafia blush." Expecting Republicans to reform the system, he explained, would be "like asking John Gotti to ... clean up organized crime."

Upon taking control of the House, Democratic Majority Leader Steny Hoyer immediately proclaimed: "We will end the K Street Project, a practice that brought shame on this House when some Members promised access in return for patronage hiring."

So you can imagine my shock and dismay upon discovering Democrats, now firmly ensconced in power, have a K Street Project all their own. Not since the realization that Bill Clinton's vow to run the most ethical administration in American history was less than sincere have I been so disillusioned.

It's like finding out Santa charges parents for their kids' toys.

These days the Democratic leadership is strong-arming K Street to - take a guess! - hire more Democrats. "I think they haven't come to terms with what happened two Novembers ago," Sen. Bob Menendez (D-N.J.), told Roll Call. He added that while Democratic politicians will talk to Republican representatives of various industries, the "lack of a common philosophical and policy background makes it hard to communicate and build consensus" (in Roll Call's words).

No kidding. Funny how that works. For good and ill, the Republican Party is the pro-business party and the Democratic Party ain't. Maybe that explains the lack of common philosophical background. After all, I don't recall Tom DeLay saying that labor unions and the NAACP should hire more Republicans.

"If Democrats want to hold the majority," a Democratic lobbyist told Roll Call, "they don't do it by playing Mr. Nice Guy. You don't hold power if you don't know how to use that power." Why, it's almost like that guy's a ventriloquist's dummy for Tom "The Hammer" DeLay.

On Thursday, the Senate Democratic leadership dragooned the heads of 17 major trade associations, according to the Politico. In an act of political intimidation the KSPers never dreamed of attempting, the senators leaned on the business representatives to get with the Democratic program or lose access.

What about all those Democratic promises of turning away from the corrupt practices of Republicans?

The great conservative statesman Edmund Burke offers one possible answer: "Hypocrisy can afford to be magnificent in its promises; for never intending to go beyond promises, it costs nothing."