An Ode to Uncertainty 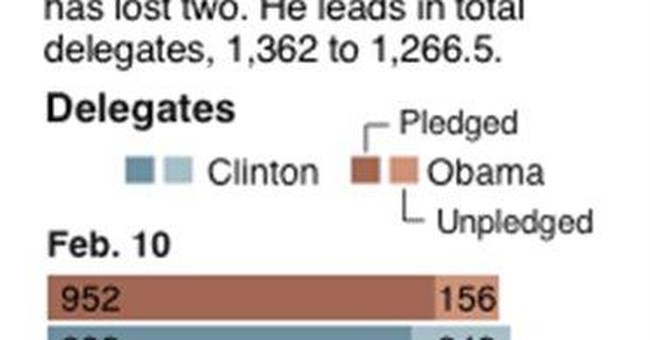 The cover story of last month's Scientific American is "The Future of Physics." It's got all sorts of stuff in there about how the guys in the white coats can measure what happens when they smash these teensy weensy thingamajigs - so tiny they make atoms look like Dom DeLuise after he let himself go - hurling around at 99.9999991 percent the speed of light. They're not positive they know how everything works; indeed, the opposite is the case. The deeper they look at the infinitesimal details, the more they discover they don't know. But at least they're down to the quantum nitty-gritty.

It's an interesting contrast with politics these days. While physicists can count the number of quarks in a given space with mind-boggling accuracy, the very best political minds in the land, with all the resources they need at their disposal (i.e. a phone, an up-to-date Rolodex and a calculator), can barely manage to get a working head count of how many delegates, "super" or otherwise, Barack Obama and Hillary Clinton have. It turns out that party hacks are more prone to Heisenberg's uncertainty principle than gluons and quarks are. No wonder Einstein said physics is easy but politics is hard.

People talk a big game about how they want the "process" to be more democratic, how they want more people to be involved, how we need more voices and choices. But when we get what we ask for, many of the same people suddenly crave closure more than a guest on "Dr. Phil does." Take the race for the Democratic nomination. Depending on your point of view, the Democratic Party admirably or foolishly "frontloaded" the primary schedule so as to get a more representative group of voters - more black, more Hispanic, more urban, more Western, etc. - deciding who the nominee will be. Now that this system has created the result all the goody-goodies wanted, they're freaking out like extras in "Reefer Madness."

Terrified that their votes will actually matter, the superdelegates are begging to dodge the responsibility of doing their job. Like missile officers in an ICBM silo, they don't want to be the ones to turn their keys. You can't blame them. Why frontload the Democratic primaries to make them more democratic, only to close the deal in a decidedly (lowercase R) republican way?

But there's a larger point here. Politics, or at least the democratic kind of politics, are supposed to be hard, messy, chaotic. Herding cats is the essence of democratic politics. But for the past few decades, the bipartisan political establishment has been trying to rationalize the process, to reduce the electorate to a bunch of discrete, digitized elements reachable through targeted and tailored advertising. If they did a remake of "The Graduate" today, the one-word advice from a political consultant would be "microtargeting." Are you a 27-year-old male in Tallahassee who subscribes to Field & Stream, leaves the toilet seat up and thinks Bill O'Reilly should part his hair on the left? Well, you'll get an e-mail just for you! And, miraculously, the candidate writing you will agree with you on everything!

Campaign-finance reform was part of this larger effort to take the mess out of politics. Many politicians think they have an absolute right to control the political conversation. Mike Huckabee summarized this view well when he told National Public Radio, "Everything that involves the candidate's name or another candidate's name should be authorized and approved by that candidate, otherwise it shouldn't be spoken." In other words, politics is our special game and you folks can watch but not play. Similarly, self-important newspaper editors think they have a special license to opine on politics but are horrified when mere rubes with a checkbook want to do the same thing. Thus came the rush to regulate political speech during campaign season - the time of year when political speech is the most influential and, hence, the most important. Again, this is often a bipartisan phenomenon. Democrats decry pretty much any attack as "swift-boating." Republicans complain that billionaire Democratic sugar daddy George Soros is less like a citizen promoting his views and more like a James Bond villain in a quest for global domination.

By now the argument against campaign-finance reform is familiar to anyone who cares and boring to everyone else. So let's leave that for another time and instead look at one of the main reasons this election season has been so exciting: The polls haven't mattered as much as they normally do. If the old rules of thumb about success in the polls held true, Rudy Giuliani and Hillary Clinton would have wrapped up the nominations long ago. Then again, if the pollsters had been right, Obama would have won New Hampshire handily and probably California, too, which means he would have been the nominee. In other words, uncertainty has been the order of the day, and uncertainty is good because, among other things, it gives people the sense that voting matters and that all these things aren't decided by a system that doesn't include them.

So here's an old idea that might have new salience. Citizens should refuse to talk to pollsters, social surveyors and private census takers. What would happen? Well, fairly quickly the microtargeting would get pretty macro. Rather than treating Americans like customers-who-are-always-right, politicians would increasingly have to state their convictions rather than restate what some focus group told them to say. Without knowing who was in the lead until votes were actually cast, candidates might actually campaign on conviction. Rather than telling people what they already believe, politicians might actually try to educate voters on what citizens should know first.