Western Civilization and Other Fairy Tales 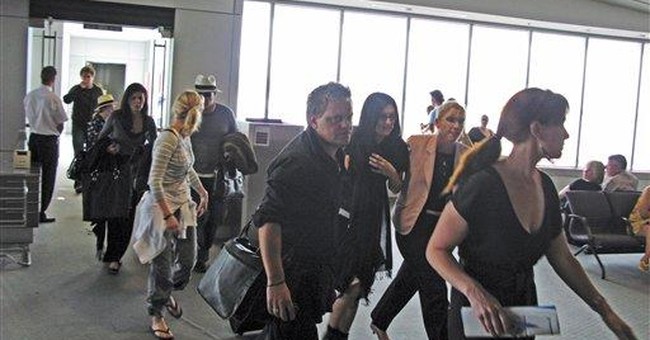 My daughter really, really, really (throw in a few more reallys for accuracy) wants to go to Disney World. Scouting reports from several of her preschool colleagues indicate that there is a large amount of princess activity down there. And not just princesses - real princesses. She's seen fake Cinderellas and Ariels - the royal equivalents of shopping mall Santas - but now she's focused on engaging the real thing, and she's been told that Disney World is where they hang their tiaras. So one day, probably very soon, we'll be heading to Florida to meet the "real" princesses who, despite presumably lavish wealth, charge parents $200 a day or more to take our children to meet them.

I just hope that while we're there, Daddy can have some fun, too. For instance, I would love to meet the "real" Winston Churchill.

You do know Churchill was make-believe, right? That, at least, is what nearly a quarter of British teens recently told pollsters for the British TV channel UKTV Gold. Meanwhile, 58 percent thought Sherlock Holmes was real, and 47 percent called Richard the Lionheart a fictional character.

This is one of those news stories that pop up with some regularity, highlighting how ignorant people on both sides of the Atlantic are about their own civilization. It's a slightly more scientific confirmation of Jay Leno's man-on-the-street "Jaywalking" segment, in which he asks passersby brainteasers such as, "Where was the Vietnam War fought?" or, "When did the War of 1812 take place?"

A survey of teenagers conducted by the National Constitutional Center found more students able to name the Three Stooges (59 percent) than could name the three branches of U.S. government (41 percent). A 1999 survey of students at 55 elite colleges and universities found that 40 percent couldn't place the U.S. Civil War in the correct half-century. Given that the U.S. hasn't been around for five half-centuries yet, I wonder how many guesses these students needed.

The civic ignorance of the American public is an old lament, a standby for finger-wagging, chin-pulling pundits like yours truly in need of column fodder. And it's probably true that it was ever thus, to some extent; that the masses never had much use for historical dates and names. Though if you read letters written by soldiers during the Civil War, it's hard not to suspect that cultural literacy has been trending southward for a long time (unless, of course, you think the Civil War only happened recently).

But here I get back to my daughter. She is a barbarian, or at least she was when she was born. And I mean this fairly literally. Political theorist Hannah Arendt once said that, every generation, Western civilization is invaded by barbarians - we call them "children." Today's babies aren't meaningfully different from those born 1,000 or 5,000 years ago. A Viking baby magically transported to 21st-century America might grow up to be an accountant or a bus driver. A baby born today and sent back in time might become a Hun, Visigoth or Aztec warrior, whatever his parents expected of him.

Families are civilization factories. They take children and install the necessary software, from what to expect from life to how to treat others. One hears a lot of platitudes about how children are "taught to hate." This is nonsense. Hating comes naturally to humans, and children are perfectly capable of learning to hate on their own. Indeed, everyone hates. The differences between good people and bad resides in what they hate, and why. And although schools and society can teach that, parents imprint it on their kids.

As a conservative, I'm a big believer in the importance of tradition, which writer G.K. Chesterton dubbed "democracy of the dead." But tradition can only be as strong as it is in the people who pass it on. And so, when I read that 23 percent of British teens think Winston Churchill is no more real than Spider-Man, it makes me shudder at the voluntary amnesia of society, the wholesale abdication of parental responsibility that represents.

Civilization, at any given moment, can be boiled down to what its living members know and believe. This makes civilization an amazingly fragile thing, and it makes parents the primary guardians of its posterity. Indeed, someone once told me that those who cannot learn from history are condemned to hear George Santayana quoted to them for the rest of their lives. Of course, that joke's only funny if you've heard of Santayana in the first place.

Now, because even my daughter's minor joys are my greatest ones, I will gladly fork over large sums of money so she can dine with fairy-tale princesses. I will even play along. But she is only 4, and I'll only be pretending.