John Stossel
|
Posted: Oct 21, 2020 12:01 AM
Share   Tweet
The opinions expressed by columnists are their own and do not necessarily represent the views of Townhall.com. 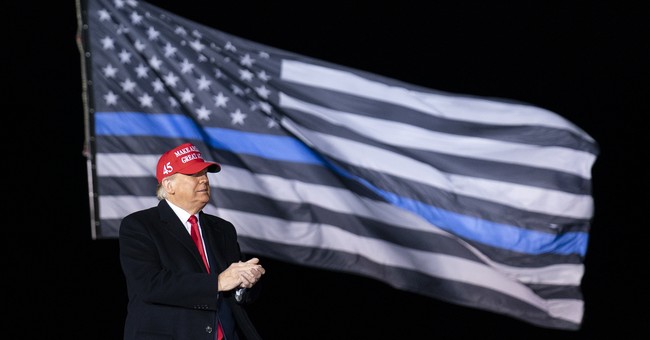 As I write, The Economist says he has only an 8 percent chance of winning.

Nate Silver's FiveThirtyEight, which came closest to predicting Trump's win in 2016 and has the best track record among modelers, gives Trump just a 12 percent chance.

But people who "put money where their mouths are" give Trump a better chance: 37 percent.

That's according to roughly that often., the website I created with Maxim Lott. It tracks multiple betting sites around the world.

Though 61 to 37 percent seems like a giant lead for Joe Biden, 37 percent means Trump is likely to win one-third of the time.

Four years ago, most bettors were wrong about Trump and Brexit. I assume they learned from that and adjusted their 2020 bets.

But since bettors were wrong in 2016, why trust betting odds now?

Because betting is a better predictor than polls, pundits, statistical models and everything else.

ElectionBettingOdds.com has tracked hundreds of races. When bettors think a candidate has a 37 percent chance -- they really do win roughly that often.

A research scientist at Amazon concluded that in the last presidential election, ElectionBettingOdds.com beat all other existing public prediction models except for Nate Silver's polls-plus model.

Silver says: "Betting markets are populated by people with a sophomoric knowledge of politics... Traders are emotionally invested in political outcomes." Also, "Markets (are) not super liquid... way different than sports where you have a much more sophisticated player base and more liquidity."

But our site takes odds from betting sites in Europe, the U.S. and a cryptocurrency-based exchange. More than $200 million has been bet.

As Silver says in his excellent book, "The Signal and the Noise," "A lot of smart people have failed miserably when they thought they could beat the market."

Daily Kos had Clinton at 92 percent. Huffington Post had 98 percent. Those two stopped operating after that embarrassment.

Silver is one modeler who's often beaten the market. In 2016, he gave Trump the highest odds, and in 2018, he was the most confident that Democrats would win the House.

On the other hand, his FiveThirtyEight model was confident Democrats would win Florida's and Indiana's Senate races, making Democrats 70% favorites in both states. But Republicans won. Bettors were closer to predicting the actual results.

Bettors do well because they consider many things not easily captured by polls and statistical models.

How many mail-in ballots do not get counted? In the New York state primary this year, 20 percent were disqualified for irregularities.

FiveThirtyEight "built in an extra layer of uncertainty this year because of the possibility that the pandemic will disrupt usual turnout patterns." But bettors believe it's not enough.

Bettors also consider the possibility that polls are wrong in some new way.

In 2016, polls showed Clinton well ahead in Wisconsin, Michigan and Pennsylvania, but pollsters hadn't questioned enough voters without college degrees. Who knows what mistakes pollsters are making now?

Betting sites' track records also do well because bettors invest their own money. That focuses the mind.

They say there's a 56 percent chance a COVID-19 vaccine will be approved by March 31, and a 22 percent chance that Trump will pardon himself during his first term.

They give 50/50 odds that this year be the hottest year on record.

The Kansas City Chiefs (17 percent) and Baltimore Ravens (13 percent) have the best chance to win the Super Bowl, but since their total is only 30 percent, some other team is likely to win.

Back to politics, ElectionBettingOdds.com's Senate map predicts Democrats will retake the senate, and might even sweep every contested state.

If that happens, Democrats would have the power to end the filibuster, pack the Supreme Court and pass their whole agenda with simple majorities.

As a libertarian, I sure hope that doesn't happen.

I'll keep watching the odds at ElectionBettingOdds.com. They update every 5 minutes.