John Stossel
|
Posted: May 23, 2018 12:01 AM
Share   Tweet
The opinions expressed by columnists are their own and do not necessarily represent the views of Townhall.com. 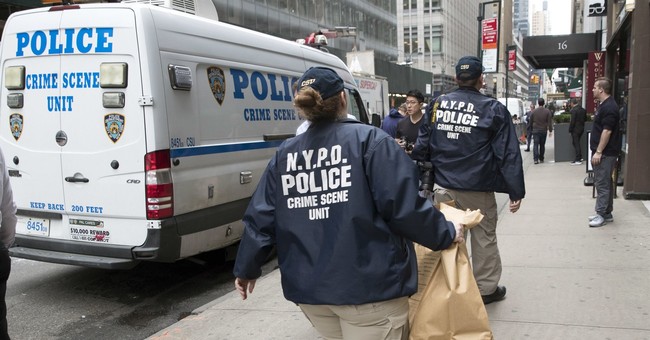 "You watch a detective get down and look at a body (and say), 'He's been dead for three hours now... (H)e ate dinner four hours ago,'" scoffs Houck. "I can't do that."

On TV, experts identify killers by their bite marks. In real life, experts claim they can do that.

The TV show "Cold Case Files" covered the trial of Alfred Swinton. He was convicted of murder because a bite-mark expert said his teeth matched a bite on the victim.

Karazulas sounded impartial and objective. "A forensic scientist is not on the side of the prosecutor or defense," he said on "Cold Case Files." "We look at the evidence."

But Swinton was innocent. Lawyer Chris Fabricant helped get him released from jail by doing a DNA test, a much more reliable, less subjective form of science.

Fabricant scoffs at bite-mark testimony: "The doctor was just wrong. It's an unreliable technique."

The more room there is for an expert witness's unique interpretation of the data, the more that can go wrong, says Fabricant. "Bite mark is similar to you and I looking at a cloud. I say to you, 'John, doesn't that cloud look like a rabbit?' And you say, 'Yeah, Chris, I think that does look like a rabbit.'"

That kind of junk science puts innocent people in jail.

I told Fabricant that I assumed most people in jail are guilty. Also, many people say crime is down because aggressive law enforcement has locked so many people up.

"If you think that maybe even 1 percent of convicted defendants may be innocent," replied Fabricant, "we have 2.6 million people in prison today, (so) we are talking about tens of thousands of (innocent) people!"

Fabricant works with the Innocence Project, a group that works to get innocent people freed from prison. Through DNA evidence, the project's lawyers have helped free 191 people.

That confident bite-mark expert who got Swinton convicted now admits he was wrong. "Bite mark evidence is junk science," he told us via email. He resigned from the American Academy of Forensic Sciences.

Houck says he'd demand other evidence. But not all cops do -- especially when scientific "experts" say someone's guilty.

Bite marks are just one dubious method police and prosecutors use.

FBI researchers claim fingerprints are right more than 99 percent of the time. But that still leaves plenty of wrongful convictions.

After terrorists killed 193 people in Madrid, the FBI matched a fingerprint on a terrorist's bag to a man in Oregon named Brandon Mayfield. They arrested him. But Mayfield was innocent. Weeks later, Spanish investigators compared the prints more carefully and found the real terrorist.

Other techniques are even less accurate: carpet-fiber evidence, gun tracing, use of psychics, hair matching.

"A dog hair was associated wrongfully with a human hair," says Fabricant. "Since the turn of this century, there have been 75 wrongful convictions (based on hair matches)."

Why do judges and lawyers accept such dubious evidence?

"We all went to law school because we don't know science, we don't know math," he replied. "If somebody comes in in a white lab coat, and says, 'I've been accredited by the American Board of Forensic Odontology,' that's good enough for government work."

That shouldn't be. Too much is at stake.

Jurors tend to believe people who call themselves "scientists."

Judges should be more skeptical. They should ban junk science from courtrooms.

Clinton aide: Of course Bill visited Epstein on Pedo Island
Hotair
Has the Penn Supreme Court Invited Scrutiny and Rebuke By Relying on "Laches" to Dismiss an Incovenient Complaint?
Redstate