John Stossel
|
Posted: Mar 14, 2018 12:01 AM
Share   Tweet
The opinions expressed by columnists are their own and do not necessarily represent the views of Townhall.com. 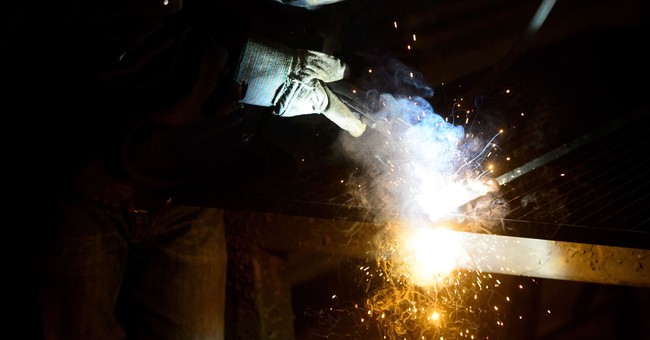 Maybe Donald Trump is such a powerful communicator and pot-stirrer that other countries, embarrassed by their own trade barriers, will eliminate them.

Then I will thank the president for the wonderful thing he did. Genuine free trade will be a recipe for wonderful economic growth.

But I fear the opposite: a trade war and stagnation -- because much of what Trump and his followers say is economically absurd.

Lots of things are essential to America -- and international trade is the best way to make sure we have them. When a storm blocks roads in the Midwest, we get supplies from Canada, Mexico, even China. Why add roadblocks?

Steel is important, but "the choice isn't between producing 100 percent of our steel (and having a country) or producing no steel (and presumably losing our country)," writes Veronique De Rugy of the Mercatus Center.

Today, most steel we use is made in America. Imports come from friendly places like Canada and Europe. Just 3 percent come from China.

Still, insists the president, "Nearly two-thirds of American raw steel companies have gone out of business!"

There's been consolidation. But so what? For 30 years, American steel production has stayed about the same. Profits rose from $714 million in 2016 to $2.8 billion last year. And the industry added nearly 8,000 jobs.

Trump says, "Our factories were left to rot and to rust all over the place. Thriving communities turned into ghost towns. You guys know that, right?"

It's sad when a steelworker loses work, but for every steelworker, 40 Americans work in industries that use steel. They, and we, benefit from lower prices.

Trump touts the handful of companies benefiting from his tariffs: "Century Aluminum in Kentucky -- Century is a great company -- will be investing over $100 million."

Great. But now we'll get a feeding frenzy of businesses competing to catch Trump's ear. Century Aluminum got his attention. Your company better pay lobbyists. Countries, too.

After speaking to Prime Minister Malcolm Turnbull of Australia, Trump tweeted: "We don't have to impose steel or aluminum tariffs on our ally, the great nation of Australia!"

Economies thrive when there are clear rules that everyone understands. Now we've got "The Art of the Deal," one company and country at a time.

I understand that Trump the developer liked to make special deals, but when presidents do that, it's crony capitalism -- crapitalism. You get the deal if you know the right people. That's what kept most of Africa and South America poor.

But Trump thinks trade itself makes us poorer: "We lose ... on trade. Every year $800 billion."

Actually, last year's trade deficit with China was $375 billion. But even if it were $800 billion, who cares? All a trade deficit shows is that a country sells us more than we sell them. We get the better of that deal. They get excess dollar bills, but we get stuff.

Real problems are imbalances like next year's $1 trillion federal government budget deficit. That will bankrupt us. Trade deficits are trivial. You run one with your supermarket. Do you worry because you bought more from them than they buy from you? No. The free market sorts it out.

But Wilber Ross is someone who phoned Forbes Magazine to lie about how much money he has. Now he goes on TV and claims, "3 cents worth of tin plate steel in this can. So if it goes up 25 percent, that's a tiny fraction of one penny. Not a noticeable thing."

Not to him maybe, but Americans buy 2 billion cans of soup.

Political figures like Ross -- and Trump -- shouldn't decide what we're allowed to buy. If they understood markets, they'd know enough to stay out of the way.