John Stossel
|
Posted: Jan 24, 2018 12:01 AM
Share   Tweet
The opinions expressed by columnists are their own and do not necessarily represent the views of Townhall.com. 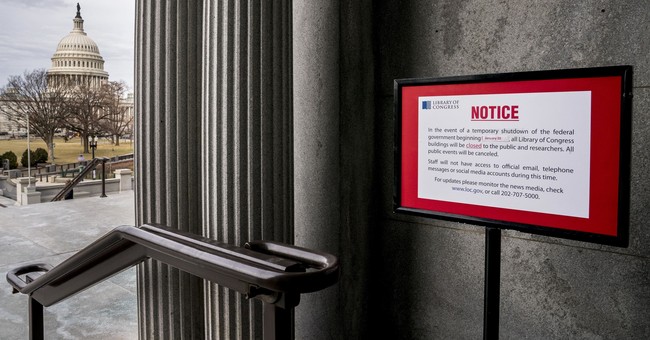 The government is open again. That's too bad.

One day, one of these shutdowns should be permanent. We would still have far more government than the Founding Fathers envisioned.

That's because even during so-called shutdowns, a third of federal employees -- nearly a million people -- remain on the job, declared "essential" government workers. Military pay continues, too, although political commentators, eager to make a shutdown sound scarier, repeatedly claimed that military families were being cut off.

Here's a list of functions that kept going during the "shutdown":

Do we need more government than that? Do we even need that much?

And don't forget there are still 50 state governments, plus thousands of local governments. We're buried in governments.

Fortunately, since most of life goes on in the private, voluntary sector, Americans didn't show much sign of freaking out last weekend, despite the hysteria spewed by politicians and the press.

The federal government was shut down for 16 days under Barack Obama, 26 days under Bill Clinton, three days under George H.W. Bush. Almost no one remembers.

We don't need government to live.

Because the 1995 shutdown was blamed on Republicans, the press searched for people who were killed or injured by lack of government. They couldn't find any.

The best they did was finding a few people who were inconvenienced or annoyed. TV news crews reported on people who needed passports on short notice but couldn't get them because passport offices, though still open, were slow.

This is not a crisis. The next shutdown, which may come in three weeks, won't be a crisis either.

The real solution to most of our problems is to let the private sector do more. Instead of reopening government programs, use a shutdown as a time to privatize them.

Sell some monuments to private groups so we don't need federal workers to maintain them.

This shutdown, national parks stayed open. Good. During an Obama administration shutdown, politicians were so eager to convey "crisis" that they put barricades in front of parks. Absurd. It cost more to block access than allow it.

Instead of politicians blaming the shutdown on the "other party," this is an opportunity -- a chance to ask how much government we really want.

I'll bet at least half those "essential" government workers are no such thing -- let the market sort out whether they're useful.

Privatize airports so they run more efficiently and compete to see how much security screening the public really wants, instead of leaving us in the hands of the TSA.

Even though America is $20 trillion in debt, people still expect our government to be all things to all people.

In the private sector, companies shed workers and unpopular products all the time. It lets them reinvent themselves and stay useful to customers.

In slow times, AT&T cut 40,000 workers. Sears cut 50,000. IBM cut 60,000. That was tough in the short term for those laid-off workers, but most eventually found more productive work. The layoffs made the companies more efficient -- and sustainable. Consumers liked their products and prices more than when the company was bloated and inefficient.

Government shutting down -- partially -- is not a disaster.

The real disaster is paying $4 trillion a year to keep it running and getting such poor service in return.