John Stossel
|
Posted: Dec 28, 2016 12:01 AM
Share   Tweet
The opinions expressed by columnists are their own and do not necessarily represent the views of Townhall.com. 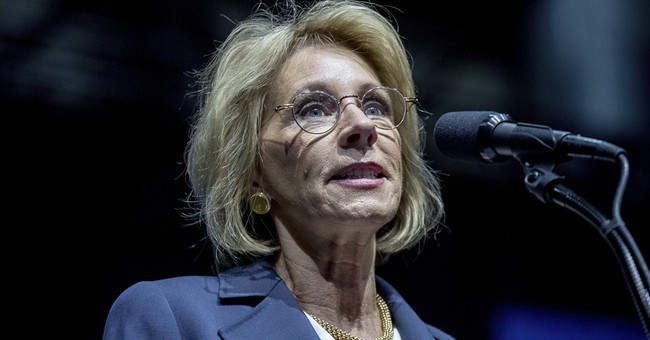 Trending
America's socialists -- I mean, progressives, are enraged that President-elect Trump chose Betsy DeVos to be his secretary of education.

A "proponent of a for-profit institution! She does not believe in the public school system!" complained CNN's Bakari Sellers.

Wait. Is your for-profit local supermarket less "public" than your kid's school? No! For-profit institutions serve the public and usually do it better than governments do.

Let's stop calling government schools "public." Call them what they are: "government-run" schools.

Anyway, the charter schools DeVos supports are public. They're just not controlled by the usual crowd of education bureaucrats. That's why the education establishment hates them. The establishment has had total control for a century and doesn't want to lose it.

They complain that DeVos:

--Doesn't have a degree in education!

--Has no teaching experience!

For 50 years, the education establishment said that government schools struggled because they didn't have enough money. So America tripled spending per student.

No. Time is up. Children have suffered enough.

My consumer reporting taught me that things only work well when they are subject to market competition. Services improve when people are free to shop around and when competitive pressure inspires suppliers to invent better ways of doing things.

DeVos understands that. That's why she wants to allow parents to choose the schools their kids attend. Schools that do a better job will attract more students. Better schools will grow, while some inferior ones will close.

Inferior schools, like any failing business, should close. It's a disservice to students to keep them open.

Educrats and teachers unions refuse to look at it that way. They don't want kids escaping their grasp. Unions don't want to lose dues-paying members.

They prefer that kids stay trapped while bureaucrats decide what improvements, if any, need to be made.

Progressives are also upset because DeVos gave $200 million of her own money to the "wrong" schools, Christian schools.

A smear in the New Yorker suggests that DeVos will have government-run schools teach creationism: "DeVos is a fundamentalist Christian with a long history of opposition to science ... (S)he could shape science education decisively for the worse, by systematically depriving young people, in an era where biotechnology will play a key economic and health role worldwide, of a proper understanding of the very basis of modern biology: evolution."

That would be bad -- were it true, but DeVos' critics don't quote anything she says that shows "opposition to science." DeVos once told me that in a free society that shares her philosophy of education, "some religious schools might teach creationism, but not in science class."

Hello? Stronger is better, even if the difference is just "incremental." A Stanford study concluded that charter students achieved "two months of additional gains in reading and math."

That suggests DeVos has already done more to improve American education than most government education bureaucrats have.

DeVos won't have much power over your kids' schools. K-12 education is mostly locally and state run. In fact, the wasteful $90 billion education department should be abolished altogether. But DeVos' appointment sends the right message.

It tells educators they should face pressure to get up each morning looking for ways to improve education. That won't happen unless parents are free to experiment and escape experiments that fail.

I wouldn't want to be trapped in a bad restaurant while government debated how to improve it.

Everyone deserves the freedom to get out of there and try something better.