John Stossel
|
Posted: Sep 14, 2016 12:01 AM
Share   Tweet
The opinions expressed by columnists are their own and do not necessarily represent the views of Townhall.com. 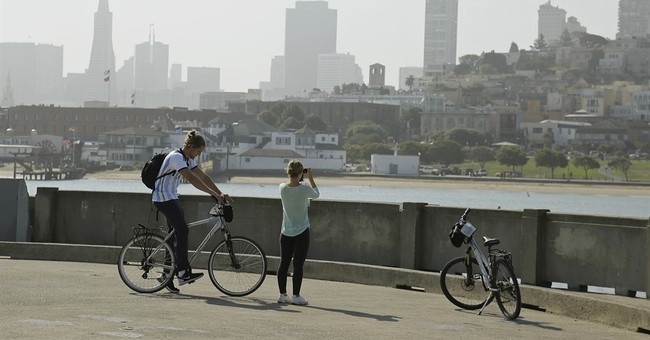 Seth Rogen, co-writer, co-producer and co-star of the animated comedy "Sausage Party," is unhappy with me -- for defending him.

His movie was attacked by some online commentators for using ethnic and sexual stereotypes, as cartoons often do. What was remarkable is how incensed some people get over a cartoon, even one about talking food.

A reviewer for a site called Autostraddle at first praised the movie, including its depiction of a talking lesbian taco voiced by Salma Hayek.

But then the site replaced the review with a 2,600-word apology. Autostraddle calls itself a "progressively feminist online community for a new generation of kickass lesbian, bisexual & otherwise inclined ladies." Its endless apology said, "After we received feedback about (the "Sausage Party" review) from our Trans Editor (and others including Facebook commenters), we decided to un-publish the piece."

Un-publish. Last week, I did a show on free speech. A tweet I sent out plugging it said, "The attack on free speech even extends to silly movies like @SethRogen's Sausage Party."

Rogen sent my tweet to his 4 million Twitter followers. (Thanks for that, Seth!) But being a Hollywood leftist, he didn't thank me for defending his movie. Probably because I work for Fox, he tweeted that my tweet is what happens "(w)hen idiots use your movie to pretend that free speech is being attacked when it isn't at all."

Rogen's followers pounced, one saying, "It's baffling that some people can't comprehend that criticism is a part of free speech ... Everything is working as intended. Stossel is a tool."

But wait! I agree! As I said, private organizations have the right to publish or "un-publish" just about anything.

Fortunately, commenters who read about this on the website Mediaite got it: "Rogen would have been wise to not say anything ... (L)ike a typical Hollywood star, he thought it was all about him. Stossel was making a point about the state of free speech in America today and mentioned the reactions a silly movie is getting to help make his point."

To clarify: Private individuals are free to criticize all they like, and the First Amendment forbids government to decide whether a taco is offensive to lesbians -- or to fundamentalist Christians for that matter.

It's an important rule. We have just one government. When government censors, we're all screwed.

Private citizens and private organizations, whether they're TV channels, universities or activist groups, can duke it out in the arena created by our right to free speech.

We should keep in mind, though, that the same people who get upset about lesbian tacos, irreverent depictions of Jesus, drug use in movies or whatever the controversy of the day is, sometimes become politicians. Some then try to use government force to shut their enemies up. Hillary Clinton wants to censor a movie that criticized her. Donald Trump promises to "rewrite" libel law.

I fear that the growing belief that no one should ever have to suffer being offended or hearing something that upsets them could come back to haunt us with calls for real censorship. That would be a real attack on free speech.

It's good to have a thick skin. In the free-for-all of public debate, people will get upset.

I can't order people to listen to their enemies any more than I can order my enemies to shut up. The best thing we can do when we hear upsetting ideas is respond with good counterarguments.

People who keep arguing with each other, even if they offend each other, are less likely to look for uncommunicative, violent ways to settle their disputes.

Keep making art, voicing opinions and expecting other people to tell you you're an idiot who should stay silent. That's the messy process by which we learn from each other.

I assume Seth Rogen agrees that's the best use of free speech there is.

So This Is the Reason Why the J6 Committee Canceled Wednesday's Hearing
Townhall
This interview with a non-binary student in Virginia will (allegedly) change your mind about Glenn Youngkin
Twitchy
As Hurricane Bears Down on Florida, Biden Shows Just How Petty He Can Be
Redstate
Biden's Depletion of the Strategic Petroleum Reserve Could Be Catastrophic Soon
PJ Media