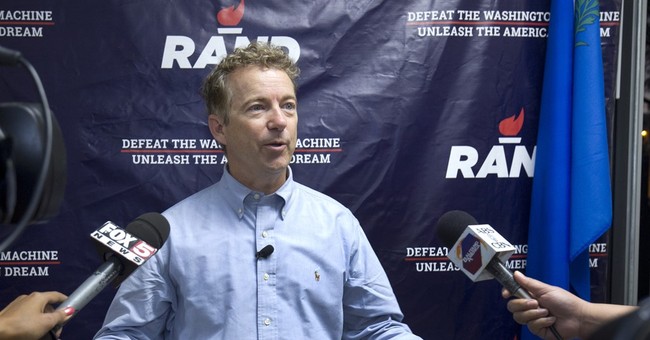 Trending
We love to complain about elites, people who seem to have a special advantage, privileges in life.

I get annoyed by the Kardashians and other spoiled rich kids. They didn't work for their wealth. They don't contribute.

Still, those elites are mostly harmless.

But there's one group of truly dangerous elites: politicians. Spoiled party kids may have stupid ideas, but they can't impose them on the rest of us. Politicians can, and do. It's an important distinction to remember.

In Thomas Sowell's book "The Vision of the Anointed" (which should have been titled "(SET ITAL) Conceit (END ITAL) of the (SET ITAL) Self (END ITAL)-Anointed", Sowell points out that politicians use "the word 'ask' -- as in 'We are just asking everyone to pay their fair share.' But of course governments do not ask, they tell. The IRS does not 'ask' for contributions."

A rare presidential candidate who understands the importance of that difference is Sen. Rand Paul, who will appear on my TV show Friday. Paul points out that free markets get people to create things without force, and markets are much more efficient than governments.

"There's an irony here," says Paul, "because many of these people say, I'm pro-choice. No -- they're very anti-choice when it comes to market decisions. Producing stuff, buying stuff, selling stuff -- you're not allowed to do it. They're the (SET ITAL) anti (END ITAL)-choice party. That's what socialism is."

People defend government spending out of concern for the poor, but what we get from government often has little to do with helping those at the bottom. "We just discovered," says Paul, "that they spent $800,000 developing a televised cricket league for Afghanistan ... and they spent $150,000 for yoga classes for federal employees."

This habit of taking money and power from citizens all over America and letting Washington elites decide how to use it doesn't exist just among Democrats. Paul sees it among Republican supporters of Donald Trump, too. Their attitude, says Paul, is "nobody quite knows exactly what economic system that celebrity is for, but trust him because he's smart and all-powerful -- give him more power and he'll fix everything."

By contrast, Paul says, "I'm not running to run the economy or the country."

I worry that, to most people, that sounds like a politician not "doing his job." People do seem eager to vote for a politician who will "lead," and "take charge."

But I don't want to be led. I'm not a child. I don't need elites in Washington, D.C., to boss me around and then tax me for it.

I wish voters would read Matt Ridley's new book, "The Evolution of Everything." He points out that when it comes to the innovations that make the most difference in our lives -- medicine, smartphones, search engines, even language -- it's not the elite planners who bring progress.

"It comes from the bottom up," says Ridley. "What happens in technology or morality or culture or any other aspect of human life is that ordinary people interacting with each other is the source of most innovation, most change in the world."

These good things happen in a decentralized, unplanned way all around us -- and it's been that way since humans first evolved.

Ridley says, "We give far too much credit to the people who are in charge, the people who seem to be on top of things and running things. They're just taking the credit."

Politicians should admit that more often. But that would require them to be humble. Loudly pretending to be in charge is their specialty.

Oh, STFU: Vox Article on 'Invasive Species' Goes Exactly Where You'd Expect in the Woke Universe
Townhall
It's not a lie if he believes it! Joe Biden describes the time he went to Israel and met with Golda Meir during the Six Day War, even though he didn't [video]
Twitchy
Kennedy Traps 'Wild-Eyed Leftist' Biden Judicial Nominee in Yuuge Lie
Redstate
The Morning Briefing: Democrats' Lust for Baby Killing Is Really Creepy
PJ Media