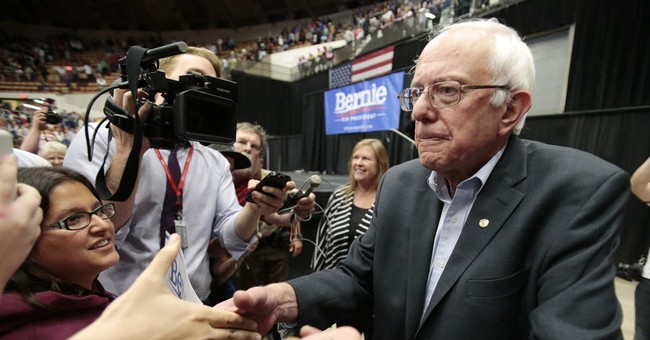 Nearly 10,000 people turned out to hear Bernie Sanders in Wisconsin. Why? Apparently, many Democrats want socialism.

Sanders is the Vermont senator who is running for the Democratic Party's presidential nomination.

Sanders calls himself a "democratic socialist," not to be confused with New York City mayor Bill de Blasio's preferred label, "social democrat," but both believe that more power and wealth in the hands of government (less in the hands of free people and the free market) is a good thing. They just don't want you to think they're dictators like Stalin. They may institute terrible economic policies, but they'll have the backing of voters.

We must do these things, he says, because "wealth is centered in the hands of a very few." He accuses Republicans of preferring it that way.

That's a common refrain on the left, and it appeals to many voters. Some poor people think they'll be helped by "redistribution," and rich people who don't understand the process that made them rich want more rules to "level the playing field."

I wish someone would educate them and ask Clinton, "What's wrong with 'record profits'? What do you think happens to that money? Greedy executives just sit on it? No! Profit is reinvested in ways that make all of us better off!"

Libertarians and real free-marketers agree that too few people are rich but understand that today it's largely because of government.

The minimum wage laws that Sanders likes decrease the odds that people on the bottom rung will get hired and learn the basics of being a good employee. Other laws make it harder for them to move up.

Today's thicket of regulations means entrepreneurs must hire lawyers and "fixers" to get anything done, and those middlemen cost money. Not a big problem if you're already rich, but a big obstacle if you're just starting out, or trying to expand a small business.

Requiring paid maternity leave makes companies even more wary of hiring young women. The law forbids such discrimination, of course, but bosses just give some other reason for not choosing female applicants.

That same unintended consequence happened with the Americans with Disabilities Act, the well-intended law supported by Democrats and Republicans meant to help more disabled people enter the workforce. But (SET ITAL) fewer (END ITAL) disabled people work now that the law is in effect. Fifty-one percent held jobs when the law passed; now only 32 percent do.

Government interventions in health care -- such as Obamacare -- haven't made health care cheaper, but they sure helped rich insurance companies. By writing the companies' roles directly into the law, Obamacare makes it harder for others, such as the new fee-for-service health stores, to compete.

Complex financial regulations mean that rich investors who are already cozy with big law firms, big banks and the Fed are better at understanding and manipulating the rules than a small "angel investor" who wants to back a new invention or interesting start-up.

For 200 years, poor Americans pulled themselves out of poverty by finding new and better ways to do things, or just by working hard. Today, fewer lift themselves up. One big reason is that rules meant to help poor people end up favoring the well-connected rich while keeping poor people dependent.