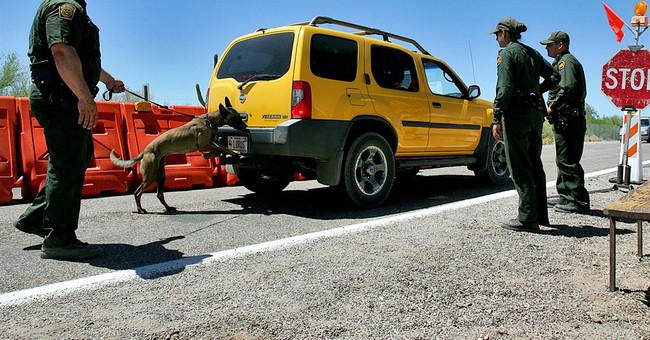 If I drive across a U.S. border, I expect to stop at a Border Patrol checkpoint. But imagine driving to the grocery store, or Mom's house, well inside America, and being stopped by the Border Patrol. Many Americans don't have to imagine it -- it's how they live.

Even as the federal government fails to control the southern border, it sends the Border Patrol farther into the interior, where Americans complain that agents harass people who are already U.S. citizens.

It's legal. The Supreme Court ruled that the Border Patrol can set up "inland" checkpoints anywhere up to 100 miles from an external border of the United States. That's what government now considers a "reasonable distance" from the border.

But that means the zone within which you could be stopped and searched includes much of Florida and California, and all of Maine and New Hampshire. Two-thirds of America's population lives that close to the border.

American Civil Liberties Union lawyer James Lyall argues, "Interior checkpoints fundamentally fly in the face of what it means to live in a free society, where you don't have to answer to federal agents when you're going about your daily business."

The Supreme Court ruled that Border Patrol agents at these checkpoints can "conduct brief stops for the limited purpose of verifying residence status" but cannot "conduct searches of individuals or the interior of their vehicles." But the experience of members of my staff and videos on YouTube show that Border Patrol agents do exactly that. They often demand answers to lots of questions and search cars, too.

The reason these videos are posted on YouTube is because increasing numbers of Americans consider the searches unconstitutional. They refuse to answer the extra questions. Some refuse to roll down their windows. Then agents sometimes break the window. Sometimes they tase the driver.

Pastor Steven Anderson was stopped at a Border Patrol checkpoint 60 miles from the Mexican border.

Officers say their police dog alerted them to something in his car, but Anderson says the dog never reacted to anything. Anderson wouldn't let them search his car, so officers broke both windows and tased him.

People in Arivaca, Arizona, 25 miles from border, told us that living there is like living in occupied territory. Apache helicopters fly overhead. Dozens of Border Patrol trucks cruise their streets. Children in Arivaca must go through checkpoints every day just to go to school.

"Agents tell people," says Lyall, "that all residents are suspect simply by virtue of living in southern Arizona."

The Border Patrol wouldn't respond to my questions about these issues, so Rep. Peter King, R-N.Y., spoke up for them: "I'm not aware of any significant abuses. I'm on the Homeland Security Committee. If anything, the complaint we get is there's not enough strict enforcement."

He points out that "when people come into this country illegally, they don't stay on the border; they keep going."

That's true. But that doesn't justify harassing people who just want to drive home from work.

Rick Rynearson, an Air Force pilot who served in Iraq and Afghanistan, told me he's furious about being repeatedly stopped. Once he was detained for over half an hour when, after answering 17 questions from agents, he refused to answer more.

I asked Rynearson: "Why not? The Border Patrol agents would say, come on, Rick, this is hardly a threat to your liberty. Just tell us where you're going."

But Rynearson told me he sees himself as "a person who's having to stop in the middle of a road, who's done nothing wrong, and finds himself surrounded by armed government agents with dogs."

As an Air Force pilot, Rynearson understands that protecting our safety and freedom sometimes requires a police presence or military action. But he offers this reminder: "Real freedom lies in the thin space that separates an American citizen from an armed member of their government."

Unfortunately, as domestic policing grows, that space gets thinner.