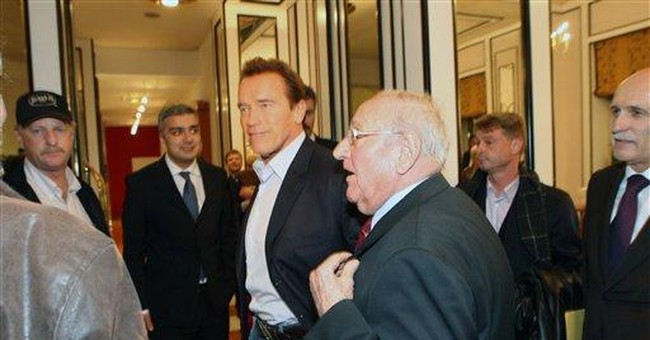 Bill O'Reilly is mad at me because I'm not mad enough about taxes.

Last week on "The O'Reilly Factor", we talked about California's and New York's enormous budget deficits and planned tax increases. Those states would have big surpluses had they just grown their governments in pace with inflation. But of course they didn't. Now the politicians act like their current deficits are something imposed on them by the recession.

But that's nonsense. They created the problem with their reckless spending.

Let's look at the particulars. Had the government of New York state grown at the rate of population and inflation over the past 10 years, it would have a $14 billion surplus today. Instead, spending grew at twice the rate of inflation (http://tinyurl.com/yguvfpm). So New York has a $3 billion deficit.

To dent California's deficit, bureaucrats will withhold an extra 10 percent from every taxpayer -- at least from those who don't flee the state. New York planned to raise the price of new license plates, but then backed off. The visible tax was unpopular. But the hidden taxes grow.

Hidden taxes are more pernicious because they disguise what we pay for government. We blame merchants, not our legislators, for the high price of gasoline, liquor, cigarettes and phone calls, but the money goes to the political thieves.

New York imposes a gas tax of 61 cents a gallon -- almost a quarter of the cost of the gas. New York City taxes cigarettes at $4.25 a pack. Washington state collects $26 per gallon of hard liquor. Illinois politicians take a sneaky cut when you buy junk food: They add 6.25 percent to the cost of soda and candy.

My phone bill lists seven different taxes -- unintelligible stuff like a "Public Safety Commission Surcharge" and an "MCTD tax." The payroll tax is one of the biggest hidden taxes. You assume that you know what you pay because it's listed on your paycheck, but that's actually only half of it. Employers must pay an equal amount -- money that otherwise would have been part your salary.

O'Reilly was most indignant about the visible taxes. "You, Stossel, are going to be paying 45 percent of your money to the government!" he said. I replied that I already pay more than that, since I live in New York City.

But I apparently was not indignant enough, because later in his show he told comedian Dennis Miller, "Stossel doesn't get it."

O'Reilly is right about my not being furious. It's not that taxes don't anger me. They do. But I'm more angry about the arrogance of the ruling class. It reminds me of Walter Williams' riff: "Politicians are worse than thieves. At least when thieves take your money, they don't expect you to thank them for it."

Taxes, even counting hidden taxes, are not the real measure of what the thieves take. The true burden of government, the late Milton Friedman said, is the spending level. Taxation is just one way government gets money. The other ways -- borrowing and inflation -- are equally burdens on the people. (State governments can't inflate, but they sure can borrow.)

O'Reilly told me that America is ready for a tax revolt. I hope he's right. But I don't think it will happen until more people see the ruling elite for what it is: a gang of arrogant bullies that has the audacity to believe that they know how to direct our lives better than we do.

That's why, bad as the taxes are, I'm more upset about ObamaCare, Medicare, the "stimulus," the auto bailout, the bank bailouts, the Fannie/Freddie bailouts, the trillions in guarantees, and on and on.

The politicians' spending schemes represent presumptuous interference in our lives. They are an assault on our autonomy.