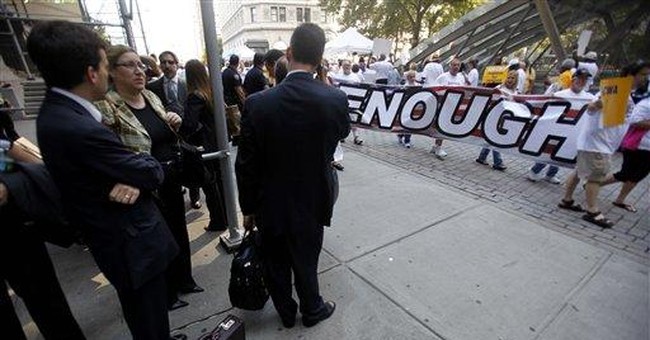 In England, health care is "free" -- as long as you don't mind waiting. People wait so long for dentist appointments that some pull their own teeth. At any one time, half a million people are waiting to get into a British hospital. A British paper reports that one hospital tried to save money by not changing bedsheets. Instead of washing sheets, the staff was encouraged to just turn them over.

Obama insists he is not "trying to bring about government-run healthcare".

"But government management does the same thing," says Sally Pipes of the Pacific Research Institute. "To reduce costs they'll have to ration -- deny -- care."

"People line up for care, some of them die. That's what happens," says Canadian doctor David Gratzer, author of "The Cure". He liked Canada's government health care until he started treating patients.

"The more time I spent in the Canadian system, the more I came across people waiting for radiation therapy, waiting for the knee replacement so they could finally walk up to the second floor of their house." "You want to see your neurologist because of your stress headache? No problem! Just wait six months. You want an MRI? No problem! Free as the air! Just wait six months."

Polls show most Canadians like their free health care, but most people aren't sick when the poll-taker calls. Canadian doctors told us the system is cracking. One complained that he can't get heart-attack victims into the ICU.

In America, people wait in emergency rooms, too, but it's much worse in Canada. If you're sick enough to be admitted, the average wait is 23 hours.

"We can't send these patients to other hospitals. Dr. Eric Letovsky told us. "Every other emergency department in the country is just as packed as we are."

More than a million and a half Canadians say they can't find a family doctor. Some towns hold lotteries to determine who gets a doctor. In Norwood, Ontario, "20/20" videotaped a town clerk pulling the names of the lucky winners out of a lottery box. The losers must wait to see a doctor.

Shirley Healy, like many sick Canadians, came to America for surgery. Her doctor in British Columbia told her she had only a few weeks to live because a blocked artery kept her from digesting food. Yet Canadian officials called her surgery "elective."

"The only thing elective about this surgery was I elected to live," she said.

It's true that America's partly profit-driven, partly bureaucratic system is expensive, and sometimes wasteful, but the pursuit of profit reduces waste and costs and gives the world the improvements in medicine that ease pain and save lives.

"[America] is the country of medical innovation. This is where people come when they need treatment," Dr. Gratzer says.

"Literally we're surrounded by medical miracles. Death by cardiovascular disease has dropped by two-thirds in the last 50 years. You've got to pay a price for that type of advancement."

Canada and England don't pay the price because they freeload off American innovation. If America adopted their systems, we could worry less about paying for health care, but we'd get 2009-level care -- forever. Government monopolies don't innovate. Profit seekers do.

We saw this in Canada, where we did find one area of medicine that offers easy access to cutting-edge technology -- CT scan, endoscopy, thoracoscopy, laparoscopy, etc. It was open 24/7. Patients didn't have to wait.

But you have to bark or meow to get that kind of treatment. Animal care is the one area of medicine that hasn't been taken over by the government. Dogs can get a CT scan in one day. For people, the waiting list is a month.