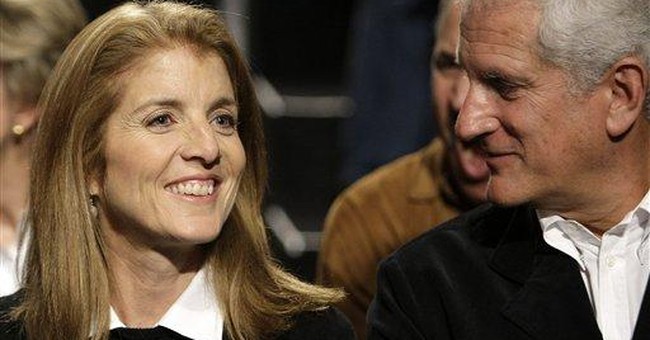 New York Republican congressman Peter King, who wants that seat for himself, says there is "no evidence she's qualified." New York Democratic congressman Gary Ackerman agrees: "She has name recognition, but so does J.Lo."

Zillions of people may rant that Caroline Kennedy lacks what it takes to be a senator, but I think she's qualified.

After all, what does a senator do?

In theory senators represent the people of the state that sent them to Washington. It's not at all clear what that means. It has something to do with serving the interests of those people rather than the senator's own interests. But it's long been debated whether a representative should do what constituents want or what the representative thinks they should want. Either way we have a problem. New York has 19 million people. We don't have the same interests, and we rarely want the same things. People are diverse.

What's a representative to do? If some in the state want a subsidy for their businesses or farms, and others object, how can the senator serve both groups? Polling is no help, because the minority would be unrepresented.

The idea of a senator truly representing the interests of 19 million people is ridiculous. (This holds for Wyoming's half-million as well.) We pretend that he or she can do it, but no one really believes it. It's just a game we play. The reality is something else.

Caroline Kennedy may indeed be unqualified to be a U.S. senator if she is judged by the job's theoretical duties. But so is everyone else.

On the other hand, she is qualified to perform the actual duties of a senator. Let's look at those:

Senators bloviate on anything and everything, regardless of whether they know what they are talking about. This is an important part of the job. Senators must sound as though they know how to create jobs, what kind of energy the United States should use, how to make health care affordable, how to plan education for 75 million unique children, and so on. They don't have to actually know how to do these things. They just have to sound as though they know. I know very little about Caroline Kennedy, but I'm sure she's capable of making pronouncements about how progressive polices will save the world.

All this is not to say the job of a senator is easy. Senators do have to figure out which interest groups to reward with subsidies, special tax breaks and pork in order to assure reelection. But with a little work, that's probably not hard to learn.

So by the standard of the actual duties of a U.S. senator, Caroline Kennedy is eminently qualified.

But, of course, so is virtually everyone else.