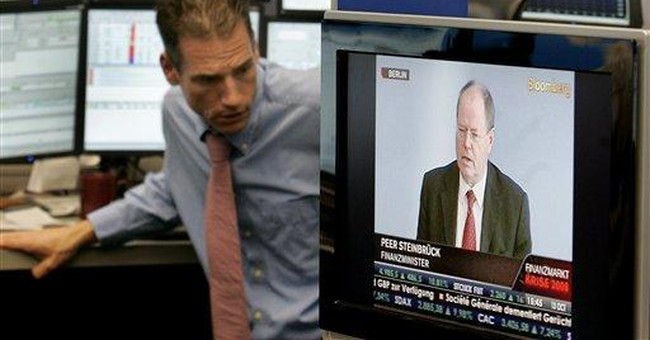 That's the conventional explanation for the economic mess.

Barack Obama said, "This is a final verdict on the failed economic policies of the last eight years ... that essentially said that we should strip away regulations, consumer protections, let the market run wild, and prosperity would rain down on all of us."

Is deregulation is the culprit? It can't be. There was no relevant deregulation in the last 25 years. Meanwhile, highly regulated institutions eagerly bought risky government-guaranteed mortgages, stimulating excessive housing construction and an unsustainable price bubble.

Deregulation wasn't the problem, and reregulation isn't the solution.

It's intuitive to assume that regulation prevents problems, but it's rarely true. First, how would regulators know what to do? Leaving aside the bias they might have and the brutal fact that regulation is physical force, how can a small group of people understand the workings of a market sufficiently to regulate sensibly? Markets, especially financial markets, are far more complicated than any mind can grasp. They consist of many millions of participants making countless decisions on the basis of unarticulated know-how and intuition. To attempt to regulate such activity requires knowledge no one can possess.

To seriously regulate those markets you'd have to impose the "precautionary principle," a favorite idea of some environmentalists, especially in Europe. The principle prohibits any product or activity not proven 100 percent safe. It sounds so reasonable. But Ron Bailey of "Reason" points out what it really means: Don't do anything for the first time.

Bad idea. The world needs innovators and inventors. We need people who try things for the first time.

Nobel Laureate F.A. Hayek emphasized that government planners suffer from a "knowledge problem" because "the knowledge of the circumstances of which [they] must make use never exists in concentrated or integrated form but solely as the dispersed bits of incomplete and frequently contradictory knowledge which all the separate individuals possess."

In other words, the planner or regulator can't possibly know what the multitude in a market "knows." So what regulators really do is straitjacket market participants, preventing innovators from creating prosperity for us all.

Another "Austrian school" economist, Israel Kirzner, applied Hayek's insights to typical regulation, showing how it must interfere with the market's discovery process, the profit-and-loss system that uncovers information vital to making consumers better off:

"Even if current market outcomes in some sense are judged unsatisfactory, intervention ... cannot be considered the obviously correct solution. Deliberate intervention by the state not only might serve as an imperfect substitute for the spontaneous market process of discovery; but also might impede desirable processes of discovery, the need for which has not been perceived by the government. "

Kirzner's point is that even if our problems are the result of market failures -- and with so much intervention, how could they be? -- there is no reason to believe that government could do a better job. Quite the contrary.

The relevance of his ideas to what ails the economy now should be clear. The current interventions prevent market participants from adjusting to new conditions. Banks might be willing to sell their shaky loans to investors at a steep discount, but why do that if the government might bail them out? Why not wait to see if you can get a better price? With the politicians constantly changing the details of the bailout, selling at a discount today might get you accused of fiduciary malpractice later.

Uncertainty over what further new regulations may be imposed only stifles the market's search for solutions.

Markets are never perfect. They are made up of people making their best judgments, and people's judgments are never perfect. Yes, under some circumstances market activity such as speculation and short-selling could harm innocent bystanders. But those who say government is the best protector are wrong because the knowledge problem is an insurmountable obstacle.

There is only one genuine protection for the public: the discipline of profit and loss. Nothing concentrates the mind like the prospect of bankruptcy.